People are getting pretty excited about the recent jump in oil prices, and suddenly everyone seems to be recommending that it’s time to jump in with both feet and buy the oil & gas sector. There are  numerous reasons why this logic is fraught with risks, including the simple fact that rising oil prices will cause drillers to hedge future production at the newly higher prices and then start producing like mad, thus elongating the period of overproduction.

They’ve done that in natural gas with terrible consequences that continue to this day, after five years! US natural gas has turned into the place where money goes to die.

So here is Matt Badiali with his take on why a lot of prudence is warranted in the oil & gas sector at this time.

The bad news in the oil and gas sector keeps coming. Oil and gas giants like SM Energy, Apache, and Hess are starting to report their 2015 first-quarter earnings. So far, the results prove even the big names in the sector are running into trouble. 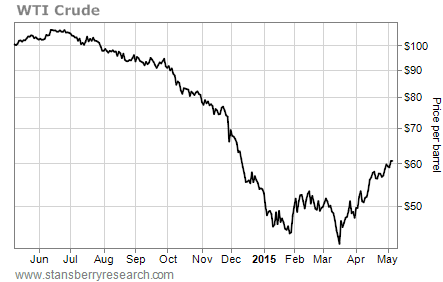 As you can see in the chart above, most of the decline came in 2014. But so far, this year has been tougher than last. You see, while oil prices fell a lot last year, prices started out relatively high. That’s why the average price of WTI crude oil in the fourth quarter of 2014 was $72.95 per barrel. But this year, oil prices have started out low… and stayed low. The average WTI crude oil price over the first three months of 2015 was $48.62 per barrel. That’s a 33% fall.

The table below shows just how poorly the group as a whole fared this quarter:

But just four companies accounted for 93% of the decline. Chesapeake Energy, Apache, Devon Energy, and Anadarko Petroleum posted a total decline of $16.9 billion in operating income. These are big oil and gas producers. For example, Chesapeake’s market cap is the lowest of the group. And it’s nearly $10 billion.

Chesapeake – along with Murphy Oil, Continental Resources, and EOG Resources – also slashed its oil production. Its drill rigs were down to their lowest level since 2004. These four companies accounted for a production decline of 24.9 million barrels of oil. Chesapeake took a $3.7 billion loss (net of tax) on some of its properties. And it cut its capital budget (the money it uses to drill wells and find oil) by 37% in 2015. The company’s poor performance hurt its operating cash flow. It fell 49% from the fourth quarter of 2014 to the first quarter of 2015.

Operating cash flow is the lifeblood of a company. If its operations aren’t generating enough cash to cover its expenses, then the company dies. And it will be tough for Chesapeake to recover its cash flow by drilling fewer wells and producing less oil and gas. Management has already warned shareholders that there could be more bad news if oil prices remain low.

In short, when big names like Chesapeake are facing problems like these, it’s time to be cautious on the sector. The falling oil price that exposed problems at the end of 2014 has made things worse in the first quarter of 2015. And even “cheap” oil and gas stocks can fall lower on more bad news. By Matt Badiali, Growth Stock Wire

Investors are still allocating monies to broken models, it seems. Read… Is This The Top For Oil Prices For Now?