“Disappointing” and “ugly” were among the operative words used to describe the GDP report that the Commerce Department released today, which came in far below economists’ consensus expectations. In the first quarter, the economy grew, if you can call it that, by a mere 0.2% annualized, according to the “advance” estimate, down from 2.2% in the fourth quarter. That annual rate of 0.2% is so tiny that a downward revision within the normal range will push it into the negative.

They blamed the weather, which was gorgeous in California but tough in some other states, as it often is in the winter. Since GDP is seasonally adjusted, the normal effects of winter, which can be harsh in the US, are already part of the equation. So go figure….

And they blamed strung-out consumers for the tepid 1.9% increase in consumer spending. Turns out, consumers juggling credit cards, student loans, car loans, and exorbitant rents or mortgages weren’t borrowing and spending enough. They were trying to hang on to the money they’d saved at the pump. They were paying down their credit cards or saving for tuition and for that $500 healthcare emergency that they might otherwise not have the money for… instead of spending the money on the spot.

They blamed the labor dispute at West Coast ports, where a handful of players held a gun to the nation’s head, which was a true if self-inflicted fiasco that impacted companies around the country.

They blamed the strong dollar for the 7.2% decline in exports at a time when global demand is already languishing.

They blamed energy companies for the 23% plunge in investments in “structures,” which includes drilling and completing oil and gas wells. Drilling activity has plummeted, as measured by the collapsing oil and gas rig count. And corporate spending on equipment was flat. But it’s logical in a quarter when companies were religiously focused on blowing a record amount of money on buying back their own shares, instead of investing in things that would actually help the business.

And there was another “surprise” in the report: businesses increased their inventories by $110 billion. This actually ads to GDP. Without it, GDP would have been much worse, with a minus sign in front. I have flagged soaring inventories three times in Q1 (here, here and most recently here) because I’m worried about them. Inventories tie up cash; and someday, businesses are going to try to bring them back in line. There are two ways to do it: and if sales don’t increase magically, they’ll do it by cutting back orders – which will be the next shoe to drop.

These factors have been known throughout the quarter. It remains a mystery why these highly paid brains on Wall Street are blaming them now for the “surprise.” They should have included them in their GDP forecasts. But here is the thing: the Atlanta Fed’s GDPNow forecast totally nailed it.

The Atlanta Fed started the model in 2011. It takes into account economic data as released and adjusts its GDP forecast for the quarter accordingly. The model is volatile as it reacts to volatile monthly data that are subject to sharp revisions.

In mid-February already, the GDPNow model pushed its “nowcast” for Q1 down to 1.8%. The “Blue Chip” consensus was 2.8%. What were they smoking? The nowcast then plunged. On March 17, I wrote, Economy Finally Reaches “Escape Velocity,” Heads South. It featured the GDPNow model whose forecast had dropped to 0.3%, while the “Blue Chip” consensus (dated March 5 in the Atlanta Fed chart at the time) was still 2.4%.

By March 25, the GDPNow forecast had dropped to 0.2% [US Economy Heads Toward Zero Growth in Q1], which is exactly what the Commerce Department reported today. The “Blue Chip” consensus (dated March 5 in the Atlanta Fed chart at the time) was still an incomprehensible 2.4%. Off by only a whole entire full-blown decimal. 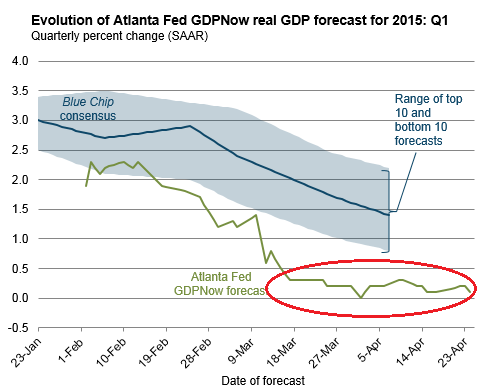 The model has the advantage that its forecast is not determined by human interpretation of the incoming data. Wall Street doesn’t control it or pay for it and can’t fire it if it says the wrong thing. It can destroy myths without having to worry about flipping hamburgers for the rest of its life. It doesn’t have to propagate on an annual basis the notion that “escape velocity” will finally kick in during the spring and accelerate the economy to warp speed required to rationalize the irrational valuations of stocks and bonds. It just focuses on the data.

The data get fed into the model, and whatever comes out is the nowcast. The algorithms have been changed over time to make the model a more accurate forecast of what the Commerce Department’s GDP estimate will be. Humans do that. They should be proud of their work. At least for the first quarter, their model truly nailed it while the hype mongers on Wall Street and hopium-smoking “Blue Chip” economists, true to form, were lost in the sea of their own boundless optimism. Kudos to those folks at the Atlanta Fed.

The downdraft might not be exactly “transitory,” as the FOMC hoped today, and disturbing references to Crisis Year 2009 have been cropping up in some Fed reports. Read… Manufacturing Falls Apart in the Middle of the US