Agustín Carstens, governor of the Bank of Mexico and chairman of the IMF’s International Monetary and Financial Committee, is an absolute insider in international finance and central banking. He’s not an opponent of QE and interest rate repression practiced so passionately in the US, the Eurozone, the UK, Japan, and other developed economies. But he unleashed some stark warnings about how all this might turn out.

The recovery – you could almost hear him put quotation marks around the word – has been “slow and is still vulnerable to setbacks,” he said at the Peterson Institute for International Economics (video). World economic growth is “sluggish,” and a “huge deficit in employment creation persists.”

But what worries him “the most” about this global recovery is that it “still depends heavily on QE and interest rate repression, but these policies “are not sustainable over the medium or long term.”

Given the magnitude of the crisis, “unconventional monetary policies have been essential and have worked so far,” he said, toeing the line. But “it’s too early to declare victory.” We “still have to see if the unwinding of those policies can proceed in an orderly fashion.”

But even if the unwinding is not orderly, it’s “unavoidable.” Otherwise, they’d “feed into inflation and induce higher than warranted interest rates and financial instability.”

Financial instability is the current central-bank and IMF euphemism for a crash. But even if central banks are afraid of this event, the current monetary policies “are not sustainable.” Someday, they must stop. Or else.

“To assess the risks associated with the unwinding of these policies, we have to identify the unintended consequences they have caused.” The policies were supposed to promote growth “by enticing more risk-taking by economic agents.” The idea was that, one, consumers would respond to QE, lower interest rates, and the hoped-for wealth effects by consuming more. And that, two, companies would respond with “real risk taking,” namely “higher corporate investment.”

None of these two things has happened. Consumers are struggling. And corporate investment actually fell, he said: “the median decline in the emerging and advanced economies has been around 2.5 percentage points of GDP.”

Instead, QE and interest rate repression have accomplished something else – the unintended consequences:

Meanwhile there has been massive investments in financial instruments of all sorts, both in local and external markets in what has been called the ‘search for yield,’ which has created considerable spillover effects of unconventional monetary policies.

The “resources” – you’ve got to love central bank euphemisms – were initially “directed” to bond and stock markets in advanced economies. As yields fell, “the search for yield led to stretched valuations.” Investments in junk bonds and in emerging-market sovereign and corporate debt “exploded.” Which led to “grade-spread and term-spread compression, record high-yield debt issuance, and deteriorating underwriting standards.”

He’d just listed some of the essential ingredients for the next crisis.

A large portion of these “massive capital inflows” into emerging markets went into sovereign debt denominated in local currencies and was “fueled primarily by carry trades, he said.

The flows promoted by excess global liquidity created a sense of exuberance which in turn generated mispricing in some assets in many emerging markets and meaningful exchange rate appreciations; and opened the door for potential sovereign capital-flow reversals.

A capital-flow reversal is when a flood of money just evaporates, sometimes overnight. If it’s big enough, it’s a dreadful thing to experience. So he said, many countries subject to these capital inflows fret about three factors:

One, the decline in exports due to their appreciating currencies, “going all the way to handicapping entire sectors in a variety of countries, such as the manufacturing sectors in Brazil.”

Two, “asset bubbles created by rapid credit expansion which in turn could result in financial instability” – there’s that term again, now linked to asset bubbles, which he used a lot during the speech, unlike other central bankers that don’t even see them.

Three, a capital-flow reversal, which could also be a source of “financial instability.” Again that term.

He called them the “blunt distorting effects” of QE on emerging markets.

But all the machinations going on in the developed economies – from Mario Draghi’s “whatever it takes” to the fiscal cliff in the US Congress – have made the capital flows highly volatile, with huge amounts of money bouncing one way or the other, with sudden reversals caused by edgy trigger fingers.

This chart from his presentation is not an “electrocardiogram,” he said, but the highly volatile flow of capital into and out of emerging markets. Note how the volatility of these capital flows, after years of calm, began going crazy just before the Financial Crisis and has continued to do so since. It’s a chart of the Hot Money: 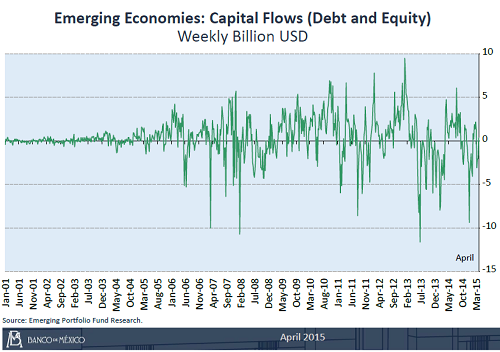 In April 2013, the first serious reality check for EMs arrived: the “taper tantrum” commenced. Together with the correction in commodity prices that followed the economic slowdown in China, it “invited the reevaluation of emerging-market prospects,” he said. The “turbulence” led in some markets to a “sharp depreciation” of the local currency, together with a “disproportionate increase in interest rates,” and “plummeting stock markets.” National authorities reacted by intervening in the foreign exchange markets and by tightening fiscal and monetary policies.

And that was just the taper tantrum when nothing of consequence happened. It was just talk.

Now, with the expectation of normalization of monetary policies in the US, and with QE in Japan and the Eurozone in full bloom, conditions have been established “for the euro and yen carry trade.” As the US offers higher yields and an appreciating currency, capital flows are toward the US, with the euro and yen becoming low-cost funding currencies in the carry trade. This process feeds into itself, he said, as the flows that it triggers reinforce the appreciation of the US dollar.

The initiation of the unwinding of the unconventional monetary policies in the US, certainly without being the sole contributor, has induced a noticeable increase in volatility in the financial markets in particular in the emerging economies.

But my fear is that during the transition period, the overextension of financial risk-taking is overwhelming the usual market responses.

And then, when he sat down for the discussion, he veered further off script: “Financial risk-taking has overwhelmed real risk-taking.” Valuations are “very rich,” he said. And there’s “the illusion of liquidity in many products.”

So when the money evaporates, all heck is going to break lose. No wonder he’s worried, with these kinds of forbidden thoughts.

The world economy has some issues, and shipping rates from China and other Asian exporters – a reflection of global trade – are in a “tailspin.” Read…  Shanghai Containerized Freight Index Collapses: China-US Rates Hit Hard, China-Europe Rates Plunge to All-Time Low