“Come down to Houston,” William Snyder, leader of the Deloitte Corporate Restructuring Group, told Reuters. “You’ll see there is just a stream of consultants and bankruptcy attorneys running around this town.”

But it’s not just in Houston or in the oil patch. It’s in retail, healthcare, mining, finance…. Bankruptcies are suddenly booming, after years of drought.

In the first quarter, 26 publicly traded corporations filed for bankruptcy, up from 11 at the same time last year, Reuters reported. Six of these companies listed assets of over $1 billion, the most since Financial-Crisis year 2009. In total, they listed $34 billion in assets, the second highest for a first quarter since before the financial crisis, behind only the record $102 billion in 2009.

The largest bankruptcy was the casino operating company of Caesars Entertainment that has been unprofitable for five years. It’s among the zombies of Corporate America, kept moving with new money from investors that had been driven to near insanity by the Fed’s six-plus years of interest rate repression.

Among the largest 15 sinners on the list, based on Bankruptcydata.com, are six oil-and-gas related companies. But mostly in the lower half. So far, larger energy companies are still hanging on by their teeth. 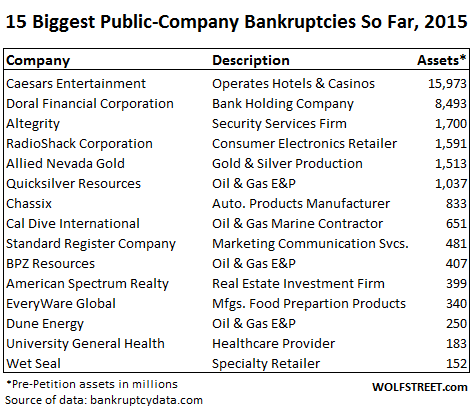 This isn’t the list of a single troubled sector that ran out of luck. This isn’t a single issue, such as the oil-price collapse. This is the list of a broader phenomenon: too much debt across a struggling economy. And now the reckoning has started.

So maybe the first-quarter surge of bankruptcies was a statistical hiccup; and for the rest of the year, bankruptcies will once again become a rarity.

Wishful thinking? The list only contains publicly traded companies that have already filed. But the energy sector, for example, is full of companies that are owned by PE firms, such as money-losing natural gas driller Samson Resources. It warned in March that it might have to use bankruptcy to restructure its crushing debt.

Similar troubles are building up in other sectors with companies owned by PE firms. As a business model, PE firms strip equity out of the companies they buy, load them up with debt, and often pay special dividends out the back door to themselves. These companies are prime candidates for bankruptcy.

Restructuring specialists are licking their chops. Reality is setting in after years of drought when the Fed’s flood of money kept every company afloat no matter how badly it was leaking. These folks are paid to renegotiate debt covenants, obtain forbearance agreements from lenders, renegotiate loans, etc. At some point, they’ll try to “restructure” the debts.

“There is a ton of activity under the water,” explained Jon Garcia, founder of McKinsey Recovery & Transformation Services.

Just on Wednesday, gun maker Colt Defense, which is invoking a prepackaged Chapter 11 filing, proposed to exchange its $250 million of 8.75% unsecured notes due 2017 for new 10% junior-lien notes due in 2023, according to S&P Capital IQ/LCD. But at a pro rata of 35 cents on the dollar!

Equity holders are out of luck. The haircut would “address key issues relating to Colt’s viability as a going concern,” the filing said. It would allow the company “to attract new financing in the years to come.” Always fresh money!

Also on Wednesday, Walter Energy announced that it would skip the interest payment due on its first-lien notes. In early March, when news emerged that it had hired legal counsel to explore restructuring options, these first-lien notes plunged to 64.5 cents on the dollar and its shares became a penny stock.

None of them has shown up in bankruptcy statistics yet. They’re part of the “activity under water,” as Garcia put it.

But these Colt Defense and Walter Energy notes are part of the “distressed bonds” whose values have collapsed and whose yields have spiked in a sign that investors consider them likely to default. These distressed bonds, according to Bank of America Merrill Lynch index data, have more than doubled year over year to $121 billion.

The actual default rate, which lags behind the rise in distressed debt levels, is beginning to tick up. Yet it’s still relatively low thanks to the Fed’s ongoing easy-money policies where new money constantly comes forward to bail out old money.

But once push comes to shove, equity owners get wiped out. Creditors at the lower end of the hierarchy lose much or all of their capital. Senior creditors end up with much of the assets. And the company emerges with a much smaller debt burden.

It’s a cleansing process, and for many existing investors a total wipeout. But the Fed, in its infinite wisdom, wanted to create paper wealth and take credit for the subsequent “wealth effect.” Hence, with its policies, it has deactivated that process for years.

Instead, these companies were able to pile even more debt on their zombie balance sheets, and just kept going. It temporarily protected the illusory paper wealth of shareholders and creditors. It allowed PE firms to systematically strip cash out of their portfolio companies before the very eyes of their willing lenders. And it prevented, or rather delayed, essential creative destruction for years.

But now reality is re-inserting itself edgewise into the game. QE has ended in the US. Commodity prices have plunged. Consumers are strung out and have trouble splurging. China is slowing. Miracles aren’t happening. Lenders are getting a teeny-weeny bit antsy. And risk, which everyone thought the Fed had eradicated, is gradually rearing its ugly head again. We’re shocked and appalled.

Corporate performance in Q1 sank into the mire because of the strong dollar? Ha! Read…  Top Corporate Excuses for the Current Earnings Debacle, And What Gets Silenced to Death