There are six large (with a market cap of over AUD50 billion) listed companies in Australia. The biggest four are banks, the fifth is BHP, one of the world’s largest mining companies. The sixth is the world’s most over-priced Telco, Telstra. The table below puts these companies into international perspective. They are small on a world scale, but behemoths in their domestic market. 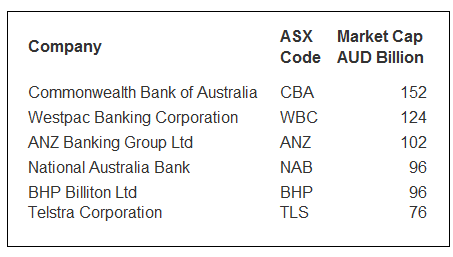 The financial sector amounts to 44% of Australian stock market capitalization. The vast majority of the sector is comprised of banks and “diversified” banks. The remainder is insurance and real estate.

Before going further we need to understand just how small Australia is. In terms of population, Australia is the same size as Shanghai and slightly larger than Beijing; about the same as NY State; and three times larger than London. In terms of GDP Australia comes in at number twelve (IMF 2013). Australia’s GDP was USD1.5T, compared with the US at 16.7T and China at 9.5T.

These four banks dominate the market and yet their primary business is consumer loans and residential mortgages. Australia’s residential real estate market is already one of the top three most overvalued in the world, competing with Canada and Norway on several metrics.

Australian export income has collapsed, as has manufacturing. And imports are much more expensive, due to the decline of the Australian dollar. But our Reserve Bank takes comfort in the strength of our residential construction sector. So our economy is going to consist of building houses and apartments for which we will pay ever higher prices?

Since October 2014, the CBA share price has increased 28%, from AUD74 to AUD95. The other three big banks show the same steep price increase. These increases reflect the assumption that Australians will continue to borrow evermore for overpriced real estate. The recent, steep stock price increase was a result of buy recommendations from various financial organizations, based upon yield rather than future earnings potential.

And Australian business confidence is low. Very low. In fact, the CEO of the Commonwealth Bank warned last month that this is a “significant economic threat.”

With all this as a backdrop, the truly productive parts of the economy (Materials, Energy, Health Care, Industrials, IT and Utilities) are proportionately small, and shrinking. Not helped by Australia’s appallingly low productivity.

The Australian stock market is exposed to both internal and external shocks. Downside risk is considerable. I am reminded of Donald Horne’s 1964 book about Australia; “The Lucky Country”.  He used the word “Lucky” satirically. Here’s a quote:

Australia is a lucky country run mainly by second rate people who share its luck. It lives on other people’s ideas, and, although its ordinary people are adaptable, most of its leaders (in all fields) so lack curiosity about the events that surround them that they are often taken by surprise.

The proof: The Australian government ran deficits through most of the resource boom. And now that the resource boom has collapsed, what’s next? We already know the answer: even higher deficits. By Mark Hansen, MarketCap

In the US, corporations are currently steeped in strong-dollar bashing. And it seems they need to. Read… Top Corporate Excuses for the Current Earnings Debacle, And What Gets Silenced to Death