GE’s announcement that it would shed the bulk of the assets held by GE Capital is a doozie of a deal. GE Finance, the seventh largest financial institution in the US, generated $43 billion in revenues in 2014, compared to $108 billion of GE’s industrial operations. GE Capital is so big that it has been designated a “systemically important financial institution.” Regulators are crawling all over these SIFIs. And it seems GE wants to get them out of its hair.

GE has been trimming down its financial operations since the Financial Crisis. Back in 2007, GE Capital, sporting an ending net investment (ENI) of $580 billion, generated 57% of GE’s revenues. By now it’s down to 25%. After the deal is implemented and $200 billion in financial assets have been sold, ENI drops to $90 billion. By then, GE Capital’s revenues are expected to be a mere 10% of total revenues.

It got bailed out by the Fed during the Financial Crisis when it was running out of liquidity – having borrowed short-term for long-term investments, among other sins. TARP was peanuts compared to the money the Fed handed out. The New York Fed handled these bailouts. And who was a director of the New York Fed at the time? GE’s CEO Jeff Inmelt.

So now he wants to “create a simpler, more valuable industrial company by selling most GE Capital assets,” GE claimed on Friday.

But there’s a price: On “day one,” income will get hit by $16 billion in charges, including a $2.4 billion loss on the sale of its commercial property assets, $6 billion in taxes payable on “repatriating” $36 billion in cash, and $5 billion in impairments. GE also expects an additional $7 billion in costs, for a “total exit impact” of $23 billion, wiping out most of its $28 billion in 2013 and 2014 net income. Becoming more “valuable” is expensive.

Did GE sell at the Peak of the Commercial Property Bubble? 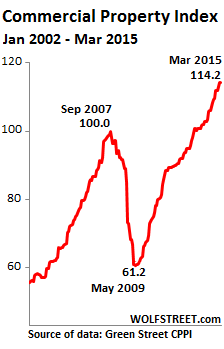 GE confessed to be a market timer: It’s a “strong seller’s market for financial assets,” it said.

There are some quirks, however.

GE is selling the assets of GE Capital, but it’s not shedding the liabilities: as part of the deal, it will fully and unconditionally guarantee $210 billion in GE Capital debt. So it’s still on the hook for the $210 billion. But most of the assets are gone, and so are the $43 billion in revenues.

To cover up the loss of income from GE Capital on an earnings-per-share basis, it would buy back $50 billion of its own shares by 2018, GE said. This will be the second largest share buyback program ever, after Apple’s $90 billion program announced in early 2014. This comes after GE’s $35 billion buyback announced in December 2012. GE doesn’t have this kind of cash flow, not anywhere near. So it will have to borrow much or all of this money. Hence more debt with fewer assets to support it. To top it off, GE will continue to pay out rich dividends.

Ironically, when GE announced the Alstom acquisition last year, it claimed that it would exercise some restraint in these sorts of things. But that was last year.

Selling $200 billion in financial assets, remaining on the hook for $210 billion in associated debt, incurring $23 billion in costs to do so, and buying back $50 billion in shares mostly with borrowed money amounts to a masterpiece of financial engineering designed to trick up its earnings per share. Not many companies can pull this off.

But Moody’s had a cow.

And it slashed GE’s credit rating. It saw “a growing level of financial risk tolerance, in favor of equity holders and at the expense of creditors.” And it’s the creditors that Moody’s serves. Here are some peppery highlights:

The pending GE Capital asset sales, with virtually all benefits inuring to equity owners, taken together with high share repurchase activity and a high dividend payout in recent periods, and the liquidity-consuming Alstom acquisition that is still pending, reflect a noteworthy shift by GE to more aggressive financial policies.

GE has been increasing cash payments to shareholders for several years but has not yet achieved a commensurate increase in operating earnings and cash flow.

In fact, the reduction of earnings and dividends from GE Capital during a period of heavy investment by GE and under difficult market conditions for many of GE’s industrial business lines will further undercut financial ratios that we already expected to be weaker than peers at the same rating level over the next several years….

The current cash consumptive stage of GE’s business cycle and ongoing heavy capital spend as anticipated will continue to constrain the company’s free cash flow generating capability and earnings over the next few years.

In other words, creditors end up with the short end of the stick.

So to heck with the creditors.

And with risks and leverage. So be it that the guarantees, if called upon, would break the company. It can always get bailed out again by the Fed. There are in fact no more risks in the financial world. The Fed has removed them from the calculus.

It was a masterful stroke of “aggressive,” as Moody’s said, financial engineering! It will be talked about for years to come. It will be the model to follow. GE shares had been in decline since December 31, 2013, despite all prior efforts at financial engineering, including $35 billion in share buybacks. And so the mere announcement on Friday caused Wall Street to foam at the mouth, and the languishing shares jumped nearly 11% in a single day! That’s how you do it!

But the Fed, which has encouraged this sort of thing, is now clueless how to unscramble its omelet. It fears “outsized market reaction” to even the smallest moves. Other central banks keep adding to the omelet. Absurdity reigns. Read… Keep Pushing Until Something Really BIG Breaks?