First-time homebuyers, the bedrock of a healthy sustainable housing market, are still largely missing in action. In February, they accounted for 29% of all homebuyers. But in the long-term data going back to 1981, according to the NAR, first-time buyers accounted for 40% of all purchases. And that’s a problem for the economy.

We know what happened to home sales: The largest PE firms, armed with the Fed’s nearly free money started moving into the housing market in late 2011, eventually buying up hundreds of thousands of vacant homes that they then tried to rent out, thus becoming America’s largest landlords. Smaller investors also jumped into the fray. Under this buying pressure, home prices have soared, even as homeownership rates have plunged at record pace to the lowest level since 1994.

First-time buyers are stuck in the tough reality of the main-street economy. Their real incomes have stagnated. If they aren’t in the top 25%, their real incomes have declined. Rents have gone up, and in some cities, like San Francisco, they have skyrocketed, making it impossible to save for a down payment. Student loans aren’t helping. And many millennials don’t want to live out in the boonies where housing might be cheaper, but commutes long and expensive. They like living close to the city center.

Real-estate broker Redfin surveyed nearly 700 of its agents across the US to find out what keeps people from becoming first-time buyers, from the agents’ point of view. So these are potential buyers who think they can afford a home, get with a realtor to make it happen, and run into the buzz saw of reality in America’s housing market. Some of them nevertheless succeed in buying a home, others don’t. And these realtors reported their findings in the survey.

The key question was: “What is the biggest challenge that first-time homebuyers face in today’s market?”

Redfin Chief Economist Nela Richardson summed it up this way:

The balance of power is improving for buyers in many markets across the U.S., but first-time buyers are still entering a housing market with fewer homes for sale in their price range than three years ago, especially in Western cities. Buyers will have to adjust their expectations and aggressively shop for homes they can actually afford.

The problem is there isn’t much on the market first-time buyers can “actually afford” – that’s the single greatest challenge identified by 49% of the agents. New listings are in price ranges that have moved beyond the reach of many first-time buyers in most markets.

Here is the chart of the top seven reasons, as identified by realtors: 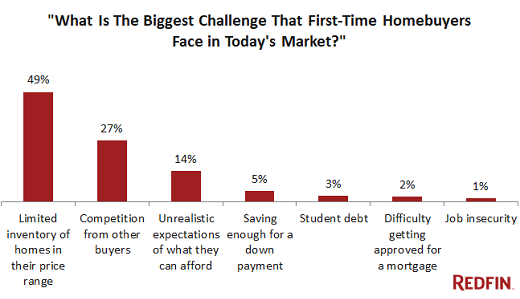 Note that in these days of once-again easy mortgage lending, “difficulty of getting a mortgage” has become inconsequential (2%) among the challenges. This is in part because many of the first-time buyers might have contacted a realtor first to see what is on the market at what prices before they tried to qualify for a mortgage. When they figured out that with their puny incomes they could never afford buying a home at these inflated prices, no matter how low the mortgage rate, they gave up looking, and the mortgage issue never came up.

And “insufficient job security” is a non-factor as well (1%). But again, the survey of realtors might have a self-selection bias: potential first-time buyers who were really worried about their job security would be unlikely to contact a realtor to get serious about buying a home. To them, job insecurity would be the dominant challenge. But it just didn’t make it into the survey because they never contacted an agent.

The item, “unrealistic expectations of what they can afford,” which 14% of the agents reported as single greatest challenge, is human nature. But it also shows how fast home prices have moved over the past three years. What was possible three years ago has become a pipedream today.

So here is the thing for Yellen & Co. to contemplate: even if nominal wages were to rise 3% in 2015 – let’s assume for a moment that our fantasies are coming true – but the price of a median home rises by 5%, as many industry gurus expect them to, then first-time buyers will fall behind even further.

This is the nature of asset price inflation. Bubbles in stocks and bonds have little impact on most people. But a home is not a financial asset. People need to live somewhere, either by buying or renting. And when monetary policies purposefully drive home prices out of reach for an increasing number of people, and particularly first-time buyers, then all kinds of real economic problems begin to occur.

First-time homebuyers are a boon to the economy. They’re spending money they don’t have to fix things up. They’re maxing out credit cards to buy furniture and towels and kitchenware and a million other things they might not even need. They’re spending every last dime of credit they have available in a drunken effort to make this house their home. There’s a housewarming party, and other people dig deep into their pockets. This is in addition to all the activity associated with the transaction.

First-time buyers are a powerful force in America’s consumer economy. But they’re being sidelined by monetary policies designed to inflate asset prices – the “wealth effect” – to enrich a relatively small number of people. And in the process, these policies are stifling real demand.

The Fed is clueless how to unscramble its omelet. It fears “outsized market reaction” to even the smallest moves. Other central banks keep adding to the omelet. Absurdity reigns. Read… Keep Pushing Until Something Really BIG Breaks?