Investors are still lusting after yield, any kind of visible yield, as long as it is positive, no matter what the risks, and they’re throwing record amounts of money even at junk-rated companies.

Nevertheless, stung by a series of bankruptcies and defaults, investors are now drawing the line at a growing coterie of energy companies. These companies are dependent on a constant flow of new money that they burn through to keep operating. When that new money has second thoughts, the companies wither. That’s now happening. But other junk-rated companies are shoving as many junk bonds out the door as possible before that door closes.

In March, $38 billion in junk bonds were sold, S&P Capital IQ/LCD reported. It was the best March ever.

Following a record-breaking February, when $32.1 billion in junk bonds were issued, and a tepid January, it brought the total for the first quarter to $91.6 billion, up 22% from the already hot pace last year. It was the largest Q1 tally since 2012.

The healthcare sector was by far the biggest issuer, at 25% of total junk-bond volume. The largest deal was Valeant Pharmaceuticals. Of the four tranches, three were in dollars for a combined $8.5 billion.

The energy sector used to be the biggest issuer of junk bonds. That money funded much of the fracking boom that blew up so spectacularly. Many of these companies have been cut off from the capital markets. So in March, the energy sector accounted for only 15% of total junk-bond volume. And for those energy companies that were still able to sell junk bonds at all, it was a mixed bag. LCD:

On the more stressed side, Comstock Resources and Energy XXI both issued highly structured secured offerings in the first week of March that yielded 10% and 12%, respectively, but both issues underperformed in the aftermarket as oil prices later retreated.

March had been tough: Quicksilver Resources went bankrupt; Samson Resources warned that it might go bankrupt; Allied Nevada Gold, American Eagle Energy, and BPZ Resources defaulted; etc. The bloodletting was heaviest in the first half of the month, “amid technical pressure from outflows and heavy issuance,” as LCD put it. But then on March 18, the Fed once again stepped in to save what it could with its “dovish” statement. The subsequent rally band-aided some of the wounds.

But leveraged loan issuance is grinding to a halt. Banks that extend these loans to junk-rated companies usually try to repackage these loans and resell them, either to loan mutual funds – where retail investors end up with them – or as Collateralized Loan Obligations.

Regulators, including the Fed, even Yellen personally, have warned banks about these leveraged loans for two years. Banks risk getting stuck with them. Leveraged loans were a factor in the Financial Crisis. Junk-rated companies that issue them are rated “junk” for a reason. And even as regulators are cracking down on banks to cut their exposure to leveraged loans, banks are already taking losses on them again [read…. Wall Street Banks Hit by Oil & Gas Defaults, Bankruptcies].

Retail investors have soured on them too. In March, they once again yanked their money out of leveraged-loan mutual funds, for the 12th month in a row! What a relentless trend: 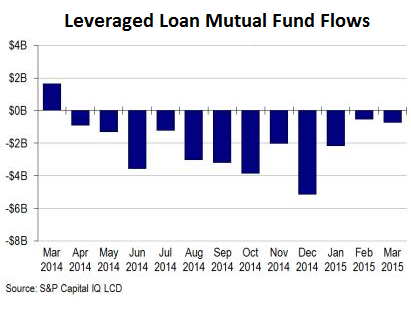 So are leveraged loans finally dead? Um, not quite.

Turns out, leveraged loans that get sliced and diced and repackaged into CLOs are hot. Bank regulators are fretting about these CLOs because banks retain some risks. Banks would take a hit when these often highly rated CLOs turn toxic as the companies begin to default.

But investors are clamoring for CLOs, and banks are more than happy to provide them, as S&P Capital IQ LCD reported today with this breathless headline: “US smashes records; Europe hits post-crisis high in 1Q.” 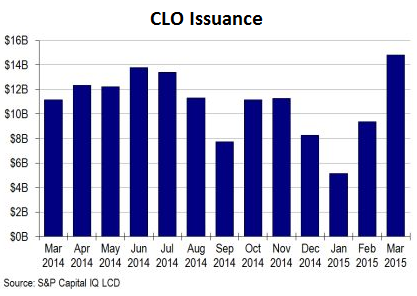 So fewer leveraged loans make it into the new-issue pipeline, thus constraining supply. Retail investors are bailing out of loan mutual funds, thus lowering demand. But demand for CLOs is booming. And this has, mirabile dictu, supported leverage loans in March, despite “the weakness that infected other risk asset classes,” as LCD put it: on average, the price of S&P/LSTA Index loans edged down only 4 basis points in March. In other words, prices didn’t budge.

And so continues the greatest credit bubble in history. Parts of it are already self-destructing. Cheap seemingly endless credit has created overinvestment and oversupply that caused a collapse in commodity prices, among others. As long as companies still have access to new money to burn through, they can avoid hosing their old investors. But once the new money dries up, old debt suddenly becomes toxic. This is happening now, company by company. But it hasn’t yet motivated yield-desperate investors, driven to near insanity by the Fed’s zero-interest-rate policies, to demand proper compensation, or any compensation, for these risks.

The free-money policies have also pushed startup “valuations” to a state of delirium. Read…  It’s Just a Question of Whose Capital Will Be Destroyed