Fed Chair Janet Yellen was outright chipper in praising the progress of the US recovery, unequivocally the result of the Fed’s finely crafted and delicately applied multi-year handiwork, though she also saw some minor wrinkles still to be ironed out.

What mattered to the markets, it seemed, was that Yellen spoke. Whatever she said or meant to say, didn’t matter. The fact that she spoke at all indicated to the markets that the free-money party would continue, and stocks rose to new highs, and bonds rose too.

Her comments signaled the Fed still doesn’t expect to raise its benchmark short-term rate from near zero at its March or April meetings. However, many Fed officials have said in recent weeks that a midyear rate increase is on the table, though not certain. Ms. Yellen sought to put the Fed’s shifting pronouncements into perspective.

A perfect storm is hitting the high-yield market. Secondary issues are extremely overvalued, and covenant quality is at a record low.

Energy junk bonds have gotten slammed since last summer in concert with the plunging price of oil, and investors are still licking their wounds. But the rest of the junk bond pile? A beauty to behold.

Based on Fridson’s econometric model, junk bonds have re-surged to an “extreme valuation,” after the scare of last September faded away. The model determines a “fair value” of the BofA Merrill Lynch US High Yield Index, expressed in its option-adjusted spread (OAS) over the corresponding Treasury yield. This fair value currently is an option-adjusted spread of 616 basis points (6.16 percentage points).

But as of February 20, the actual OAS of the index has narrowed “sharply” to 453 bps. The gap to fair value (-163 bps) is more than one standard deviation (130 bps), the firm’s “cutoff for defining an extreme.”

But the BofAML High Yield Index includes the energy junk bonds that have gotten hammered. Their actual OAS is 688 bps. Once these bonds are excluded from the index, the overvaluation of the remaining 86% of the index is even greater, “leaving the rest of the index at 416 bps, exactly 200 bps tighter than fair value.”

“Investors are not being adequately compensated at present” for taking the risks on these bonds, Fridson explained. He pointed at the VIX – and at investor complacency:

Currently, this stock market volatility measure stands at 15.73, or 0.5 standard deviations below the 1990-2014 mean of 19.95. During periods of low volatility in financial markets, investors tend to downplay the risk that they might lose money by overpaying for assets. We believe the current overvaluation of high-yield bonds reflects investor complacency engendered by the Fed’s lifting and stabilizing of financial markets with an unreasonably easy monetary policy.

So this isn’t going to work out for those junk bond investors. Eventually, these junk bonds will go the way the energy junk bonds have already gone.

Even more startling are the increasingly loosey-goosey covenants that these junk bonds are sold with. Investor protections are systematically degraded. By the firm’s measure, “the covenant quality of high-yield new issues reached its lowest level since tracking began in January 2011.”

The firm measures covenant quality on a scale of 1 (strongest) to 5 (weakest). For January, the series dropped to 4.31, edging out November’s reading of 4.30, “for the worst reading ever.” Fridson’s chart, via S&P Capital IQ LCD, shows the trend: 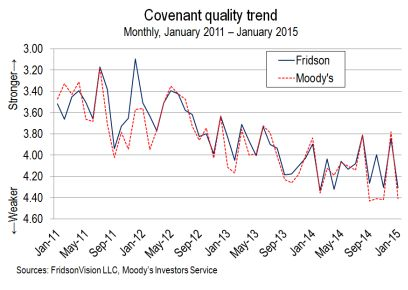 The mix of narrowing option-adjusted spreads and weakening protections for investors is a great deal for the companies and for the Wall Street firms that handle the sale of these bonds. It’s part of the magnificent credit bubble the Fed has created with its so-called bold actions.

But it’s a toxic mix for investors who end up with these junk bonds at these “extremely overvalued” prices. The buyers are mostly institutional investors, such as fund managers. Blinded by years of ZIRP and QE and driven to near insanity by ongoing interest-rate repression, they feverishly chase these junk bonds to pick up some yield in an absurd world where central banks have tried to eliminate yield.

In this manner, these “extremely overpriced” junk bonds end up in conservative-sounding bond mutual funds that the Wall Street machinery then stuffs without compunction into retirement portfolios where regular and unwitting folks stash away their life savings, and where they can decompose sight-unseen. This too is part of the Fed’s elegant handiwork.

American consumers, after years of post-financial-crisis struggles, finally see some light at the end of the tunnel. But suddenly, it all starts to crumble again. Read… What the Heck Has Suddenly Hit American Consumers?

1 comment for ““Perfect Storm” for Junk Bonds, Mutual Funds to Get Hit”