Never before has drilling for oil collapsed this far this fast.

The word “boom” can never be thought of as a stand-alone concept that everyone loves, particularly governments because they get to rake in the big bucks. It’s always attached to its miserable twin that no one wants to see, the “bust.” They come invariably in cycles, one after the other. You can’t have one without the other. It’s just a question of time. And in the world of fracking, it’s no different.

The fracking-for-oil boom started in 2005, collapsed by 60% during the Financial Crisis when money ran out, but got going in earnest after the Fed had begun spreading its newly created money around the land. From the trough in May 2009 to its peak in October 2014, rigs drilling for oil, as measured by Baker Hughes’ weekly rig count, soared from 180 to 1,609: multiplied by a factor of 9 in five years! And oil production soared along with it, to reach 9.2 million barrels a day in January.

That’s what real booms look like. They’re fed by limitless low-cost money – exuberant investors that buy the riskiest IPOs, junk bonds, leveraged loans, and CLOs usually indirectly without knowing it via their bond funds, stock funds, leveraged-loan funds, by being part of a public pension system that invests in private equity firms that invest in the boom…. You get the idea.

That’s how much of the American shale-oil revolution was funded.

Production soared for five years and eventually outpaced sluggish demand. Crap happened on the world scene, and suddenly the fracking boom, the biggest no-brainer in the history of mankind, turned into a terrible bust.

On the drilling side, the bust began in mid-October last year, after the price had been plunging for over three months. At that time, 1,609 rigs were actively drilling for oil, according to Baker Hughes. Since then, week after week, drillers were idling rigs as fast as they could.

In the latest reporting week, drillers idled another 84 rigs, the second biggest weekly cut ever, after idling 83 and 94 rigs in the two prior weeks. Only 1056 rigs are still drilling for oil, down 443 for the seven reporting weeks so far this year and down 553 – or 34%! – from the peak in October.

Never before has the rig count plunged this fast this far: 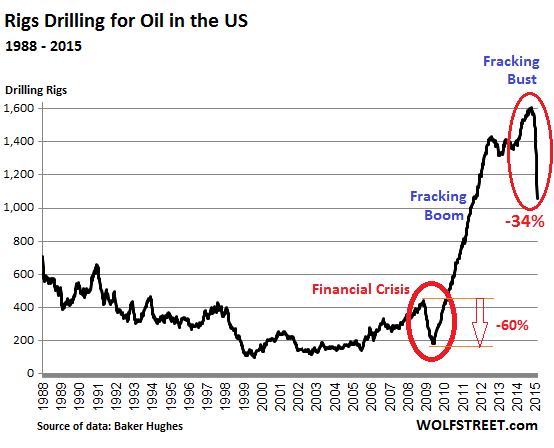 What if the fracking bust, on a percentage basis, does what it did during the Financial Crisis when the oil rig count collapsed by 60% from peak to trough? It would take the rig count down to 642!

During the financial crisis, it was a very brief but violent dip with an instant V-shaped recovery. But regular oil busts in the past have taken years to work through their problems. And rather than plunging production, we’re still seeing record-breaking production.

When will production level off?

The natural gas fiasco has shown that a price that falls below the cost of production is no incentive to cut production for the industry as a whole, as long as it gets new money to drill into the ground. The Fed’s boundless liquidity and its interest-rate repression have seen to it. But the emphasis is on producing more with less – and paper over the losses. 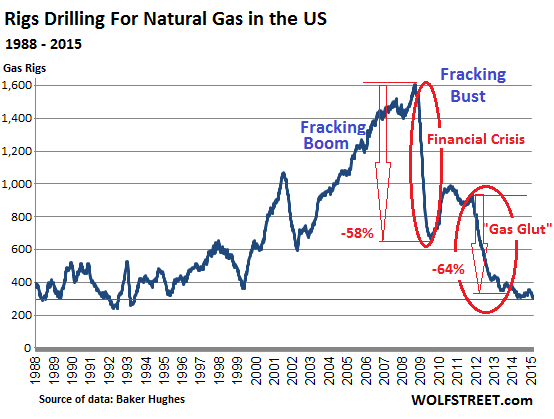 But natural gas production is still soaring from record to record. And the price destruction continues to this day.

Companies like Samson Resources that have focused on dry-gas production are now barely hanging on. Samson has lost over $3 billion since it was acquired in 2011 by a group of private-equity firms led by KKR, which has now written down its investment to 5 cents on the dollar. But Samson is still drilling for gas! [read… Money Dries Up for Oil & Gas, Layoffs Spread, Write-Offs Start].

So if natural gas is the model, the production of oil isn’t going to slow down anytime soon. But if there is no V-shaped recovery of the price of oil, the exploration-and-production sector and its suppliers will be in a world of hurt, possibly for years.

The pain is already hitting Houston, the corporate epicenter of the American oil boom. Projects are being put on hold, “and everyone is waiting for the other shoe to drop,” an engineer in the energy sector said. “Not pushing the panic button by any means” is how the Texas banking regulator phrased it. But it’s looming in front of everyone. Read… Oil Bust Hits Office Construction Boom, Banks, Suppliers – But Hey, “So Far” No Apocalypse