It was another bad-hair day for oil. The US Energy Information Administration reported that crude oil inventories (excluding the Strategic Petroleum Reserve) rose by another 4.9 million barrels last week to 419.9 million barrels – the highest level in the weekly data going back to 1982. These weekly storage reports have been relentlessly terrible for months.

Analysts were once again disappointed. In response, the price of West Texas Intermediate dove to $48.05 a barrel, down 10% from the momentary $53.50 on Monday. WTI had skyrocketed 20% in three days until Tuesday last week, then lost half of it on Wednesday when the EIA published its weekly crude-oil storage report. But it regained all of it by Monday, only to re-swoon once again. After the drop earlier today, WTI regained a smidgen, now trading at $49.38. Head spinning? Yup, volatility is setting records.

And so are crude oil inventories – now 27% above the average for this time of the year, according to Bespoke Investment Group.

Oil production in the US is still increasing and now runs at a multi-decade high of 9.2 million barrels a day and is expected to reach 9.3 million barrels a day later this year. With lackluster demand, here is what you get – an upward trajectory in crude oil inventories in the US that defies gravity, the five year range, and seasonal patterns: 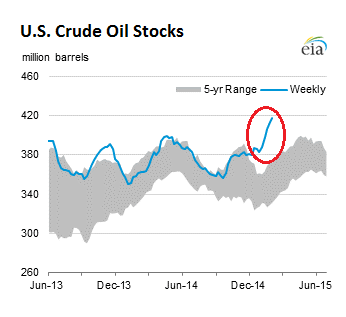 Drillers are cutting back their activities, and the number of rigs drilling for oil, as of last week’s report, has plunged by a record 29% since the peak in October. But production will not be dented for a while as drillers focus on the most productive fields and the most efficient rigs to drill new wells, and as they maximize production from existing and newly completed wells.

For example, in January, they drilled 28% fewer oil wells than they’d drilled in June last year, according to DrillingInfo, an analytics firm cited by the Wall Street Journal. That was before the debacle started, while oil still traded in the paradisiacal range above $100 a barrel. But these 28% fewer wells in January will still produce 515,000 barrels of oil a day, down merely 8.5% from what the new wells produced in June.

And while the number of rigs has plunged, there are still 1,140 rigs drilling for oil in the continental US. So production, which is still soaring, will eventually soar less, but it will continue to rise.

Even Goldman Sachs has thrown in the towel on oil-price optimism:

“The decline in the US rig count likely remains well short of the level required to slow US shale oil production to levels consistent with a balanced global market,” Goldman analysts pointed out in a report. “Lower oil prices will be required over the coming quarters to see the required US production growth slowdown materialize.”

“Lower oil prices will be required over the coming quarters….” Ah yes, they actually wrote that.

But they really haven’t thrown in the towel. Because Citi, like the rest of Wall Street, sees a miraculous, vertigo-inducing V-shaped recovery by late 2015 or early 2016, a recovery that these Wall Street banks must have because it is in 2016 that many players in the oil patch will run out of liquidity, and it is then that the shrapnel would hit banks in a very unpleasant manner. Read…  Wall Street Has a Dream About the Price of Oil