In the US, oil companies have been laying off workers and cutting capital expenditures at a feverish pace. With revenues dropping as a function of the price of oil that has fallen by over half since June, preserving cash is suddenly a priority. Wall Street, after years of handing out money no questions asked, shut off the spigot for junk-rated drillers that need new money the most.

And drilling activities are getting slashed.

The number of rigs actively drilling for oil in the US, reported by Baker Hughes every Friday, is a preliminary gauge of these changes. And during the last reporting week, that rig count plunged by 83 to 1,140 rigs, after having plunged by an all-time record of 93 in the prior week. The rig count is now down 469 rigs, or 29%, from the high of 1,609 in October. And it’s down 359 rigs over the six reporting weeks so far this year.

Never before has the rig count plunged this fast this far.

The chart below (oil rigs only, not including rigs drilling for natural gas) depicts the phenomenal fracking-for-oil boom, and what is turning out to be the worst two-month cliff-dive ever (circled in red). 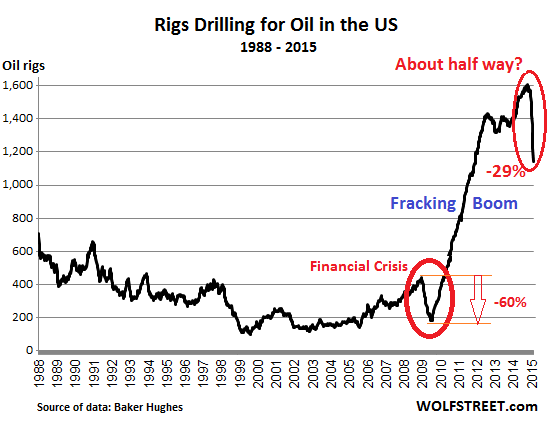 During the financial crisis, the oil rig count fell 60% from peak to trough. If this oil bust plays out the same way on a percentage basis, the count would drop to 642 rigs! The bloodletting in the exploration and production sector would be enormous. Having cut the rig count by 29% already since the October peak, the sector might already be about halfway there.

But production of oil from existing and recently completed wells continues to set records, and wells to be completed in the near future will add to it. Demand in the US has been slack. And the levels of crude oil in storage have soared to a record. Which will pressure prices further.

To stay alive, the industry is focusing on efficiency: the most production for the buck. And so rising production “will be around a lot longer than people are forecasting right now,” says Michael Masters, CEO of Masters Capital Management. Read… Oil Glut Gets Worse – Production, Inventories Soar to Record