Crude oil had rallied 20% in three days, with West Texas Intermediate jumping $9 a barrel since Friday morning, from $44.51 a barrel to $53.56 at its peak on Tuesday. “Bull market” was what we read Tuesday night. The trigger had been the Baker Hughes report of active rigs drilling for oil in the US, which had plummeted by the most ever during the latest week. It caused a bout of short covering that accelerated the gains. It was a truly phenomenal rally!

But the weekly rig count hasn’t dropped nearly enough to make a dent into production. It’s down 24% from its peak in October. During the last oil bust, it had dropped 60%. It’s way too soon to tell what impact it will have because for now, production of oil is still rising [my post from Friday… Oil Price Soars, Rig Count Plunges Worst Ever, But Bloodletting Just Beginning].

And that phenomenal three-day 20% rally imploded today when it came in contact with another reality: rising production, slack demand, and soaring crude oil inventories in the US.

The Energy Information Administration reported that these inventories (excluding the Strategic Petroleum Reserve) rose by another 6.3 million barrels last week to 413.1 million barrels – the highest level in the weekly data going back to 1982. Note the increasingly scary upward trajectory that is making a mockery of the 5-year range and seasonal fluctuations: 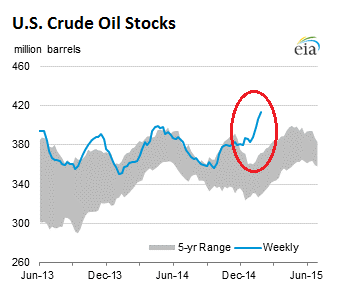 And there is still no respite in sight.

Macquarie Research explained it this way:

In our experience, oil markets rarely exhibit V-shaped recoveries and we would be surprised if an oversupply situation as severe as the current one was resolved this soon. In fact, our balances indicate the absolute oversupply is set to become more severe heading into 2Q15.

Those hoping for a quick end to the oil glut in the US, and elsewhere in the world, may be disappointed because there is another principle at work – and that principle has already kicked in.

As the price has crashed, oil companies aren’t going to just exit the industry. Producing oil is what they do, and they’re not going to switch to selling diapers online. They’re going to continue to produce oil, and in order to survive in this brutal pricing environment, they have to adjust in a myriad ways.

“Efficiency and innovation, when price falls, it accelerates, because necessity is the mother of invention,” Michael Masters, CEO of Masters Capital Management, explained to FT Alphaville on Monday, in the middle of the three-day rally. “Even if the investment only spits out quarters, or even nickels, you don’t turn it off.”

Crude has been overvalued for over five years, he said. “Whenever the return on capital is in the high double digits, that’s not sustainable in nature.” And the industry has gotten fat during those years.

Now, the fat is getting trimmed off. To survive, companies are cutting operating costs and capital expenditures, and they’re shifting the remaining funds to the most productive plays, and they’re pushing 20% or even 30% price concessions on their suppliers, and the damage spreads in all directions, but they’ll keep producing oil, maybe more of it than before, but more efficiently.

This is where American firms excel: using ingenuity to survive. The exploration and production sector has been through this before. And those whose debts overwhelm them – and there will be a slew of them – will default and restructure, wiping out stockholders and perhaps junior debt holders, and those who hold the senior debt will own the company, minus much of the debt. The groundwork is already being done, as private equity firms and hedge funds offer credit to teetering oil companies at exorbitant rates, with an eye on the assets in case of default. [read… “Vulture” Investors Descend on the Oil Patch].

And these restructured companies will continue to produce oil, even if the price drops further.

So Masters said that, “in our view, production will not decrease but increase,” and that increased production “will be around a lot longer than people are forecasting right now.”

After the industry goes through its adjustment process, focused on running highly efficient operations, it can still scrape by with oil at $45 a barrel, he estimated, which would keep production flowing and the glut intact. And the market has to appreciate that possibility.

What ratings agency Fitch and the Bank of Canada had warned about has come to pass. Read…  Canada Mauled by Oil Bust, Job Losses Pile Up – Housing Bubble, Banks at Risk