The housing market has been healed by the Fed’s bold actions, we’re told incessantly. We’re also told that the Fed is still keeping an eye on it because it might not be healed enough. Prices have soared over the last three years, and in some cities, like San Francisco, they have soared far beyond the prior crazy bubble peak. So we admit grudgingly that the Fed’s six-year money-printing and interest-rate-repression campaign, designed to inflate every asset price in sight even to absurdity, has worked.

However, an essential element in a healthy housing market – people who actually live in homes they own – has been dissipating. The homeownership rate peaked in 2004 at 69.2%. It was during the prior housing bubble. Speculative buying drove up prices beyond the reach of many potential buyers. But an industry that knew no scruples helped and lured folks into homes and mortgages they couldn’t afford and would never be able to pay for.

But as prices rose, even those methods were insufficient to keep the boom in homeownership going. And homeownership rates began declining in 2005. During the housing crash, the decline picked up speed, then meandered lower in a more leisurely pace. But now the trend has jumped off the cliff.

Homeownership in the fourth quarter dropped to 63.9% on a seasonally adjusted basis, the lowest level since Q3 1994, according to the Commerce Department. In all of 2014, homeownership plunged by 1.2 percentage points, the largest annual drop in the history of the data series going back to 1965.

The collapse of the American Dream is accelerating. This is what the “healing housing market” looks like in one heck of a relentless chart. Note the record-setting plunge in 2014: 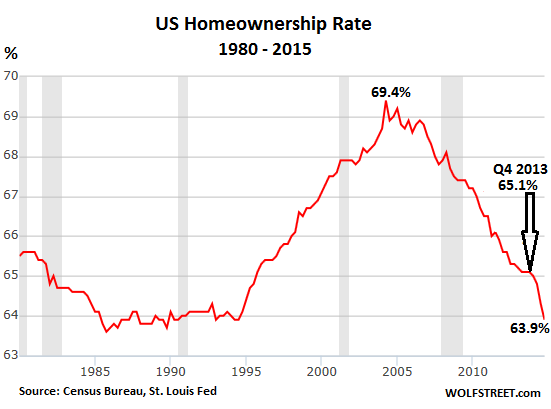 Since 2008, homeownership has been fading in all age groups. But in these two age groups, it plunged respectively 6 points and 7.9 points!

And the bitter irony in the report? The vacancy rate in the rental market dropped to 7.0%, the lowest since 1993. America is turning into a country of renters.

The nearly free money the Fed has graciously thrown toward Wall Street since 2008 has fallen on fertile ground. Private equity firms, REITs, and other Wall-Street-funded institutional investors of all sizes have plowed hundreds of billions of dollars into hundreds of thousands of vacant single-family homes, took them off the for-sale inventory, and moved them over to the for-rent inventory. This powerful buying spree by mega-landlords, concentrated over a three-year period in select markets has driven up prices and pushed out potential home buyers.

But these potential home buyers can rent these homes now. An apartment building boom has offered alternatives too, often in central locations, rather than in distant suburbs, reducing commutes and fuel costs and allowing people to live near the urban excitement. Millennials have figured it out too.

Meanwhile, the idea of “owning a home” – the American Dream – has transitioned from being a comfortable place where people live in harmony and thrive, or tear each other’s hair out over unexpected expenses and heavy responsibilities, to being a highly leveraged asset. An asset whose price is being inflated by the Fed’s bold actions. An asset that can be flipped and laddered individually or bought commodity-like in large quantities to then be rented out to those who didn’t benefit from the Fed’s largesse.

The asset can be structured into a REIT and sold to the public via an IPO. Or it can be sliced and diced and glued back together into triple-A rated synthetic structured securities backed by rent payments, possibly one of the most toxic securities out there, that then will be shuffled off into bond funds that the public holds in their retirement portfolios. And there are a myriad other ways in which this single-family buy-to-rent scheme can be monetized by powerful players in what used to be a mom-and-pop market.

And there are other dreams that are dissipating in America as the terrific oil bust is revealing sins committed and false promises made in good times. Read…  “Oil Capital of California” Declares Fiscal Emergency

7 comments for “The American Dream Dissipates at Record Pace”