Despite President Obama’s emphatic assurances in the State of the Union Address that “our economy is growing and creating jobs at the fastest pace since 1999,” there have recently been some uncomfortable squiggles, so to speak.

The collapse in the prices of oil, natural gas, and natural-gas liquids has started to make its imprint on the largest hydrocarbon producer in the world, namely the US of A. Oilfield layoffs and project cancellations are raining down on the oil patch on a daily basis. Suppliers are hit too. Many energy stocks are in the process of evisceration. Energy junk bonds are in a rout.

But consumers love it – those who aren’t losing their jobs over it – because they spend less on fuel. Consumers are voters. So politicians love it because voters love it. Hence, it’s good for the economy. I get that.

These sorts of squiggles have been worming their way into national numbers. For example, Markit’s Services PMI for December dropped to 53.3, down for the sixth month in a row, after having peaked in June. This was “not just a one-month wobble,” the report said, as the economy “lost significant growth momentum at the close of the year.” But it remained above 50, the dividing line between expansion and contraction. It’s still an expansion, and “growth is merely slowing from an unusually powerful rate rather than stalling.”

The Manufacturing PMI for December fell to 53.9, down for the fourth month in a row, from the peak in August. Production volumes rose at the weakest pace in 11 months. Same song: Still a “solid expansion,” but at a slower pace. Turns out, “uncertainty towards the global economic outlook had contributed to slower production growth and softer new business gains during recent months.”

The ISM Purchasing Managers Index fell sharply in December, down for the second months in a row, but still in expansion mode. Other indicators piled on as well: on a national basis, the economy seems to be humming along and expanding, but at a slowing pace.

Then comes along the Southeast manufacturing PMI, by the Kennesaw State University Econometric Center, that the Atlanta Fed uses. It covers Alabama, Georgia, Florida, Louisiana, Mississippi, and Tennessee. And in December, it plunged 12.7 points to 45.6.

Below 50. Not “slowing growth,” but an outright contraction. Decembers can be crummy in the Southeast, and these kinds of indices can be volatile, but this was the worst month since December of crisis-year 2009.

And it was crummy across all sub-indices: 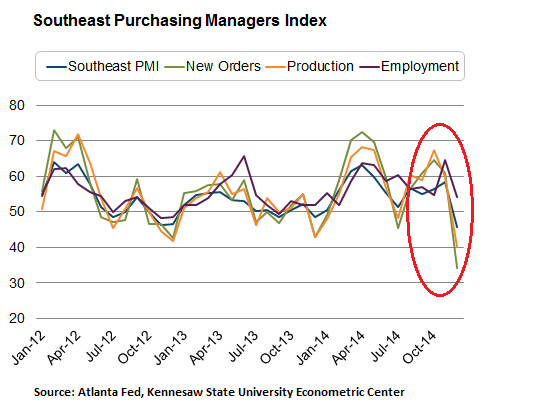 Oil and gas weren’t the only commodities that were down. In December, the Commodity Research Bureau’s all commodities price index fell to 446, the lowest level since 2010 (chart), and down 22.6% from the index’s peak in April 2011. So there are some demand issues lurking somewhere.

But ironically, the Atlanta Fed emphasized that, despite the worst contraction since 2009 in the manufacturing index, “optimism rose in December.” Concerning their expectations for production over the next three to six months, 66% of survey participants “expected production to be higher going forward.”

These “survey participants” are company executives. They’re paid to be optimistic. They have to forecast growth. No executive wants to manage a decline. This bias has infected all these kinds of surveys of executives.

The Empire State Manufacturing Index, for example, always shows a much higher value for expected activity in the future than current activity. In December, the index for current activity (blue line in the chart below) was 9.9, where zero is the dividing line between expansion and contraction. In November, it had been below zero – in contraction mode – for the first time since polar-vortex January 2013. So these aren’t exactly heady times.

But the expectation index was almost 50! The highest since January 2012. Current activity, a measure of reality, has never ever made it anywhere near that level. These folks expect an expansion of a blistering pace, even as reality is bumping along the bottom of an expansion. Note how expectations (black line) dipped into the negative only twice since the survey began in 2001, and only for the briefest moment, and only barely: on 9/11 and during the Financial Crisis. These folks are truly blind optimists, bordering on delusional, at least when it comes to these types of surveys! 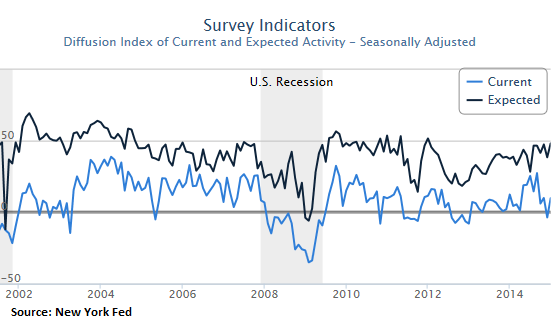 Even the New York Fed, which publishes the index, noted: “As has been the case for much of the past year, indexes for the six-month outlook pointed to widespread optimism about future conditions” – conditions that somehow never get anywhere near reality. And the Atlanta Fed’s optimistic group, which is expecting production “to be higher going forward,” is likely to fall into the same category.

So the Atlanta Fed scratched its head about the plunge in manufacturing activity in the Southeast and came up with two very plausible reasons, neither of which is going away anytime soon: “Maybe the strong dollar is reducing manufacturing exports, or maybe the fall in oil prices is affecting production activity.”

Or maybe both, in addition to a slew of other factors. Because these aren’t exactly rosy times.