Wall Street spent years hyping, propagating, and funding the oil and gas drilling boom in the US. It handled the bonds and loans issued by often junk-rated companies. It instigated the waves of mergers & acquisitions, profiting every step along the way – advisory fees, bridge loans, syndication of loans, underwriting of bonds, etc. At the very tippy-top of the market, it pushed in the opposite direction and instigated spinoffs, creating independent publicly-traded companies that didn’t have a chance and cost unsuspecting investors in their shares and junk bonds a barrel of money. It orchestrated a series of similarly misbegotten energy IPOs.

Wall Street made money off the entire spectrum of companies associated directly or indirectly with oil and gas. It was one heck of a party.

The money had to keep flowing. Fracking is a capital intensive treadmill for companies that spend a lot more on drilling and completing wells than they get in cash from their production. Barclays estimated that larger drillers outspent their cash flows by 112% and smaller to midsize companies by a breathtaking 157%. The hole had to be filled with new money, or else the music would stop.

Wall Street hyped these junk bonds, leveraged loans, or new shares and pushed them into the hands of investors that had been bamboozled by the Fed into thinking that it had removed all risks from the equation. Investors closed their eyes and bought these nearly risk-free securities that are now decomposing before their very eyes.

But it didn’t matter to Wall Street because investment banking revenues were soaring, and because private equity firms where attracting a tsunami of money for their energy funds, and they all extracted their fees, and everyone got big bonuses, and to heck with the rest. 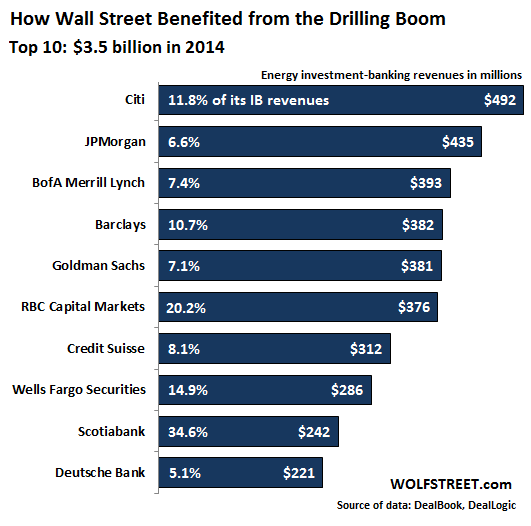 And these $3.52 billion in investment-banking revenues were extracted all year even as West Texas Intermediate had been doing this since June: 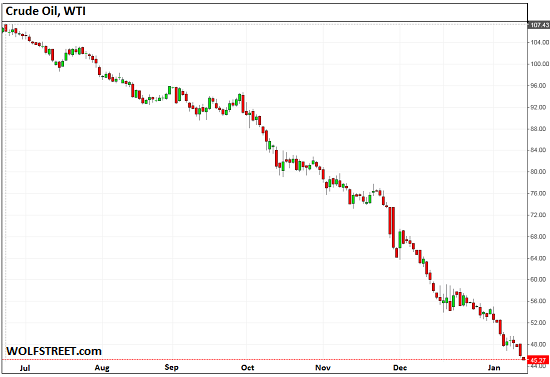 WTI plunged 58% since June to $45.26 per barrel as I’m writing this. The bloodletting simply doesn’t want to stop.

Then the other shoe dropped. Natural gas had been in recovery mode, after having gotten demolished for years, as production keeps soaring despite a price that’s below the cost of production at most wells. By mid-November, going into the winter, it was trading at $4.65 per million Btu when this happened: 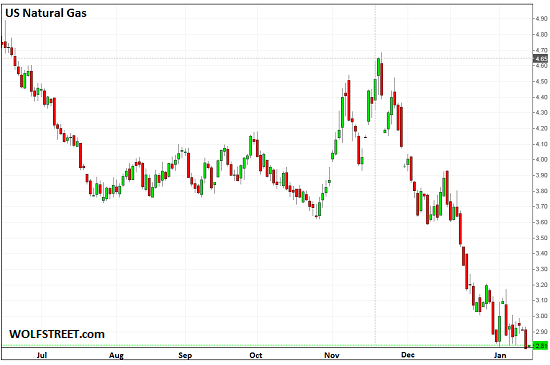 The price of natural gas plunged 40% in seven weeks to $2.82 per million Btu.

Despite the crashing energy stocks, mauled junk bonds, and beaten-down leveraged loans – all of which began to crimp Wall Street’s style – these 10 investment banks were still able to yank $3.5 billion from the sector and its bleeding investors. That’s true art.

The US is the world’s largest producer of hydrocarbon fuels – oil, natural gas, and associated liquids such as natural gasoline, condensate, and propane. So the broad price collapse will inflict more losses in the US than in any other country. But the US has a vast and diversified economy, so the losses won’t be felt like they’re being felt in Venezuela or Russia.

But they will be felt. The oil bust in the 1980s devastated the oil patch economy. It took down numerous local and regional banks as the losses were cascading through the system. The FDIC was busy auctioning off homes and office buildings. Businesses shut down. People left to find jobs somewhere else. This time around, Wall Street got involved in the boom up to its ears. And Wall Street is going to struggle with the aftermath.

Nearly 15% of Well Fargo’s IB revenues were from the oil and gas sector; Canadian Scotiabank got nearly 35% of its IB revenues from the sector. A good part of these revenues are drying up as new funding activities are hitting reality. There will be defaults. And banks will lose their shirts on deals that soured before they could shuffle them off as planned to unsuspecting Fed-blinded investors.

Despite Fed assurances that it had abolished all risks and that investors should no longer be rewarded with yield for taking risks it had abolished, investors find themselves suddenly confronted with terrible risks – for example, loans they considered nearly risk free because they were collateralized by oil. And losses are mounting.

Energy loans account for 2% of Wells Fargo’s loan portfolio; so any losses are unlikely to sink the bank though they could do some serious damage given the magnitude of Wells Fargo’s loan portfolio. Local and regional banks in the oil patch are more at risk. DealBook cites MidSouth Bank, in Lafayette, Louisiana. Of the loans on its books, 20% are to oil and gas companies. This is what happened to banks in Texas and Oklahoma during the last oil bust. But CEO Rusty Cloutier said what all CEOs in this situation have to say: “We are not panicking.”

Last time this happened in the oil patch, the stock market crashed. “Going to be a painful period of time,” is how Texas Gov. Rick Perry explained the situation. Read…  This Is Just the Beginning of the Great American Oil Bust