Of all the companies hurting from lower oil prices, few are in more danger than Brazilian oil giant Petrobras.

The state-owned oil company owns some of the largest untapped oilfields in the world; so it’s a darling of emerging-market investors. And with shares down around 50% over the past year, many investors now think it’s cheap enough to buy.

But it isn’t. The company’s spending is out of control, its profit margins are shrinking, and its debt is soaring. In short, Petrobras is a study in how not to run an oil company.

That’s exactly what we’ve seen with Petrobras over the past few years. In 2008, the company had a series of giant oil discoveries offshore. Industry reports I read at the time described many of Petrobras’ projects as the world’s “deepest,” “longest,” or “first.”

But the oil Petrobras found was difficult to produce. Developing its offshore oilfields has taken billions of dollars and years. And the company being run by bureaucrats hasn’t helped.

Petrobras spent $135 billion in capital expenditures (a broad measure of how much energy companies spend to find oil and gas) from 2011 to June 2014. Meanwhile, its debt has doubled from $70 billion in 2010 to $140 billion in June 2014. Petrobras’ debt was just $21 billion at the end of 2007. That’s a huge increase in a short time. Petrobras now holds the largest amount of debt of any oil producer in the world.

For comparison, giant oil and gas companies BP, Shell, and ExxonMobil have debt of $54 billion, $43 billion, and $22 billion, respectively.

In return for taking on more debt and investing in new equipment and upgrades, Petrobras added just 300 million barrels of oil reserves from 2011 to 2013 (the most recent data available). And it has increased its oil production by just 400,000 barrels of oil per day. That means the company spent $450 per new barrel of reserve or $337,000 per barrel of daily production.

Those are ludicrous numbers.

Petrobras’ revenues haven’t increased much over the past few years. And because of the insane cost to slightly increase its reserves and production, its profit margins have declined and EBITDA (earnings before interest, taxes, depreciation, and amortization) is down.

In summary, Petrobras is a highly indebted oil company that spends way too much on growth. That’s a stick of dynamite waiting for a match… which we’re now seeing with crashing oil prices.

From 2010 to mid-2014, the average price of oil was $92.75 per barrel. Most oil companies can earn profits at that price… even Petrobras. The price of crude oil recently fell to a six-year low. With oil now at $50 per barrel, most oil companies are struggling to remain profitable.

But Petrobras isn’t your average oil company. With its high debt and expensive growth, it will soon become more difficult to pay its bills if oil prices remain low. It may even need a government bailout. And that means shares can fall even more.

Even if oil prices increase, Petrobras may still continue to suffer. Remember, it’s a state-owned company. And most every government agency or program isn’t run for a profit. It’s not incentivized to keep costs down. It’s incentivized to grow bloated and inefficient. That’s why shares of Petrobras are down almost 80% over the past six years. 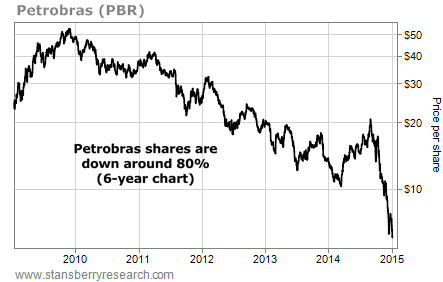 And the trend lower will continue. Anyone bargain hunting in the oil sector right now needs to remember how government works and stay far away from Petrobras. By Matt Badiali, editor, Stansberry Resource Report, The Growth Stock Wire.

5 comments for “This Giant Oil Company Is Headed for Disaster”