Currencies had a wild year in 2014. The dollar, for a change, didn’t get mangled, but gained against most major currencies. Hallelujah. But other currencies got mangled.

There were allegations that some countries were escalating the currency war over the past two years, particularly Japan. Abenomics, its economic religion, calls for devaluing the yen. So the Bank of Japan has been printing money at a terrific pace, compared to the size of the economy, with the purpose of monetizing the deficit, forcing down yields, and devaluing the yen.

While the first two are considered “bold actions” in today’s crazy world, the latter is considered a beggar-thy-neighbor policy. And Japan caught some heat from the nervous G-20 over it; they considered it tantamount to admitting that it wanted to escalate the currency war. So devaluing the yen disappeared from official discourse, even while the BoJ sped up the printing presses.

Switzerland too has been doing the same thing – printing money, selling francs, and buying mostly euros with it – but the nuance was different, and more acceptable by G-20 standards; the Swiss National Bank has been trying to keep a lid on the franc since 2011. That lid has held so far, while the SNB has blown its balance sheet out of all proportion.

One currency stood out because it was maligned by official organs and pooh-poohed by central banks and disparaged by pundits: gold. After all the lousy press it got, some folks think it lost a ton of value against the dollar in 2014. But it didn’t. On New Year’s Eve, as I’m writing this, it dropped 1%. That was about its loss against the dollar for the year. So it didn’t make the chart below.

From a broader perspective, gold booked big gains against a number of other currencies. And today, 1 troy ounce of gold buys about 22 barrels of West Texas Intermediate, up from 13 barrels six months ago.

But gold’s counterpart, silver, made the list; it got mangled in 2014.

There are plenty of folks who contend that gold and silver aren’t currencies and shouldn’t be part of a currency list. To which I reply: fine, argue about that somewhere else; I’m including them anyway.

My chart of the worst currencies in 2014 doesn’t include all currencies that crumbled against the dollar – that list would be long. I included only those currencies that were mentioned on WOLF STREET.

A word about my special friend, the Argentine peso. The government sets official exchange rates as part of its system of capital controls, import and export controls, and inflation obfuscation. Then there is the black market exchange rate, or the “blue dollar,” as it’s called. It’s set by real buyers and sellers on the street. This is the exchange rate that really matters. Websites track it, and everybody uses it. So that’s the rate I used for my chart.

Every currency has its own problems, usually a mix of central-bank inflicted punishment, market forces, market manipulation by big players, the price of oil, and so on. But the rising and falling trust people have in it is key. The fact that the stability of fiat currencies is largely based on this “trust” is one of their big structural flaws. It’s easy to squander trust.

But bitcoin has its own set of problems. This isn’t the place to dive into them. Nor do I want to point out – though I will – that I just transferred some money overseas via PayPal, and that PayPal will sit on this money for two or three weeks before delivering it to the person I paid, and that for the privilege of sitting on it, PayPal will also pay itself a tidy sum out of the amount I transferred. PayPal is ridiculously slow. And what it charges can be more expensive than a wire transfer through a regular TBTF bailed-out despicable bank, which can do an international transfer in a day or two.

Bitcoin got both of them beat. There is no fee, and when a transfer takes half an hour, people start getting impatient.

Whatever its benefits as a payment method for legitimate commerce, bitcoin was a lousy store of value in 2014, leaving terrible destruction in its wake. It got smashed down 58%. As such, it’s the worst of the bunch on my list, beating even – by a pretty solid margin – the Russian ruble and Ukrainian hryvnia.

So here is my chart of the crummiest currencies on WOLF STREET in 2014: 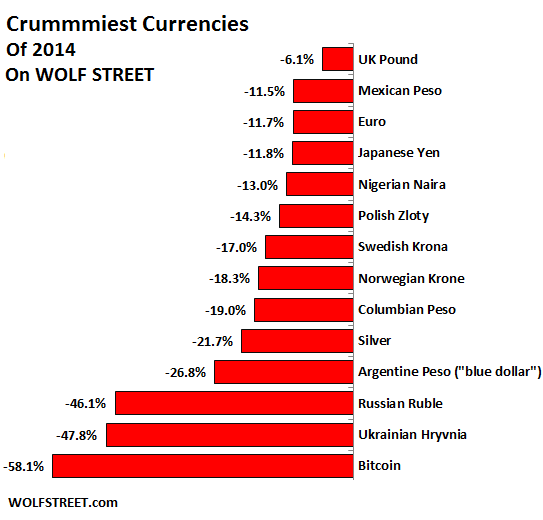 And in 2015? For the greenback, all arrows point up. Dollar bulls abound. It’s a no-brainer. But BlackRock, the largest asset manager in the world, warns: “Whenever a consensus is so unanimous, our gut tells us it’s wrong.” Read…   Elegantly Soaring Dollar to Hit “Air Pocket” in 2015, Slated for Long-Term Decline