Mortgages are hard to get, and inventories of homes for sale are low: Those have been the dominant reasons cited by the industry to rationalize the crummy home sales that have disappointed pundits for over a year. But now those memes have been debunked by homebuyers themselves.

Each real-estate data-gathering entity has its own methods, so results vary. But the direction has been consistent. Today, real-estate broker Redfin released the November data for the 41 or so major metro markets it serves across the US. The terrible numbers came with a conundrum:

With gas prices low and consumer confidence at the highest reported level in seven years, there was a lot to be cheery about heading into the holiday home-buying season. However, positive consumer sentiment did not translate into more real estate transactions last month as the number of homes sold plunged 21% in November versus October and was down 5% from this time last year.

Yet the median sale price rose by 6.2% year over year. It’s not jumping in the double-digits anymore, as in the two prior years, but it’s still rising, though sales are falling.

The National Association of Realtors, when it reported similar but not quite as dismal results before the holidays, offered its own conundrum: “Fewer people bought homes last month despite interest rates being at their lowest levels of the year.” It also blamed “stock market swings in October.” Which makes you wonder what’s going to happen to housing when an actual correction sets in, or a bear market or worse? And finally with a nod to reality, it admitted that “rising home values are causing more investors to retreat from the market.”

The NAR, a lobbying group, has been on the forefront of pushing Washington to bamboozle taxpayers ever deeper into subsidizing mortgage lending, and thus mortgage lenders, based on the premise that if nearly free money, guaranteed by the taxpayer, is made available, few questions asked, for mortgages that require nearly no down-payment, it would inflate home prices further and thus make agents more money, which would be good for homebuyers, and for the nation overall, or something.

So Fannie Mae and Freddie Mac caved. Earlier in December they unveiled mortgage programs with down-payments as low as 3%. It would put homeowners with nearly no skin in the game underwater at the slightest market downturn. It piles much more risk on lenders, and ultimately taxpayers, via the same sorts of shenanigans that contributed to the Financial Crisis.

The lobbying group was ecstatic. In its statement, it said, “NAR applauds Fannie and Freddie’s commitment to homeownership….”

It’s all part of “healing” the housing market by inflating home prices beyond the crazy levels of the prior bubble-peak, while putting the taxpayer on the hook again. It has worked so well that the market is now running into the same problem it had smacked into so catastrophically at the end of the prior housing bubble: despite super-low mortgage rates and increasingly loosey-goosey underwriting, home sales are tanking.

All year, we’ve been guessing that this was happening because people couldn’t afford the prices anymore or refused to pay them, and we’ve lined up data points and anecdotal evidence, and we’ve theorized about it. But now we heard it from the horse’s mouth: from homebuyers.

In Redfin’s Real-Time Buyer Survey of homebuyers, the biggest obstacle to buying a home wasn’t that a mortgage was hard to get or that there wasn’t enough inventory to choose from or that the stock market had a hiccup or whatever – but rising prices.

One-third (33%) of the respondents said that “affordability in the area I want to buy” was the biggest obstacle for them to buy a home.

And 24% griped about the quality – not the quantity – of inventory, which is another outgrowth of inflated prices. In the price range that a specific homebuyer can afford, there are suddenly only those homes that last year used to be in a much lower price range. Just to make a lateral move in financial terms, a homebuyer would have to step down a lot in terms of quality. But folks aren’t eager to step down and drastically lower their quality of life just because their incomes have stagnated while home prices have soared.

Those two categories combined accounted for 57% of what homebuyers considered the biggest obstacles to buying a home: 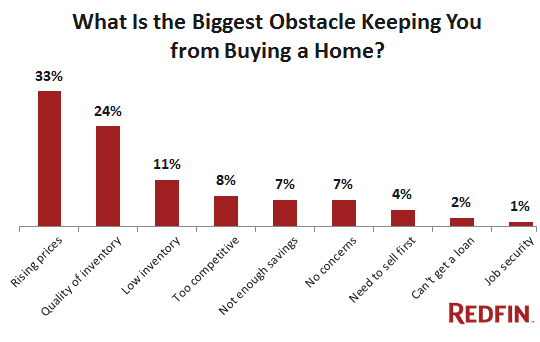 Low inventory – “not enough homes for sale,” – which the industry has held up as excuse all year, was seen as an obstacle by just 11% of the respondents. And here is the answer to Fannie Mae and Freddie Mac, and the army of lobbyists around them: only 2% – almost no one – complained that they couldn’t get a mortgage.

Redfin cites one of its brokers, who pointed at the same conundrum:

“If you can’t afford any of the homes for sale, it doesn’t matter how many homes are on the market,” said Leslie White, a Redfin agent in Washington, DC. “Despite the low interest rates, prices in DC are so high right now, many homebuyers feel priced out of the market. They’re being forced to decide between putting their home search on hold and renting another year, buying a significantly smaller home, or looking in neighborhoods farther away from the city.”

And if those hapless souls wait “another year,” and the housing market in DC continues to “heal,” they will be even further behind.

This rampant home-price inflation is the result of the Fed’s “bold actions.” The Fed has long prided itself in “healing” the housing market, along with inflating all manner of other assets, with its zero-interest-rate policy and by dousing Wall Street with newly created money. There is no limit anchored in reality how far stocks can be inflated. Irrational heights only encourage further buying, at least for a while. But housing is still subject to reality: inflating prices beyond the reach of homebuyers kills sales.

Sales in DC dropped 3.9% year over year, while the median sale price still edged up 2.6% to $360,000. Now imagine what a homebuyer faces in San Francisco where the median price, according to CoreLogic DataQuick, soared 27% year over year to hit an all-time record of $1,072,500. That might buy a 2-bedroom no-view apartment in a so-so area. Yet sales over the same period plunged 20%.

That was the moment when the prior bubble broke: exhausted buyers walked away while sellers continued to jack up their prices. And the whole kit and caboodle fell apart. Read… Housing Bubble 2: California November Home Sales Plunge to Multiyear Lows, Prices Soar