The death of the dollar – as much as some folks were ready for it – didn’t occur in 2014. OK, there are a few days left, but you get the idea. Instead, the dollar has been hot.

It rose against a large number of currencies. Some of them, such as the Russian ruble, have plunged for reasons of their own and have engendered desperate efforts to stem the decline. Other countries, like Japan, have gone all out to demolish their currencies. Escalating the currency war is frowned upon. So Japan found more acceptable names for it and redoubled its efforts. And the ECB has been passionately talking down the euro, but has done relatively little by central-bank standards to actually water it down.

Central banks tried to dominate the currency markets, but currency markets are an unruly crowd that can’t be easily cowed. In sovereign bond markets, central banks rule with an iron fist by imposing zero or even negative rates and buying up sovereign bonds, or promising to do so, with money of which they can create an unlimited amount. These “bold actions” inflated valuations and pushed down yields to grotesque levels, such as the crappy 10-year Japanese Government Bond yielding 0.32%.

That kind of control eludes central banks in the currency markets. They’re doing a superb job devaluing a currency, but bringing it back up after it begins to spiral out of control is hard. It requires resources that a central bank can’t print. It requires interest rates so high that they might strangle the economy. It requires other expensive, painful, or even impossible measures. And so more often than not, that noble fiat currency just goes to heck. We’ve seen plenty of it in 2014.

In this environment, how fast and how far will the dollar continue to rise in 2015?

“Whenever a consensus is so unanimous, our gut tells us it is wrong,” BlackRock, the largest asset manager in the world, explained in its 2015 Investment Outlook. “Stretched positioning means even a mild disappointment to dollar bulls could prompt a sell-off in the currency.”

That “consensus” that the dollar will strengthen is based on the end of the Fed’s QE, shrinking trade deficits due to rising oil production in the US and dropping oil imports. The consensus also relies on more demand for dollars as the Fed is threatening to raise interest rates in 2015, at a time when the Bank of Japan is madly printing money and pushing yields to new lows; and when the ECB is promising outright purchases of sovereign bonds on a massive scale.

And true, BlackRock says, that increasing rate differential is going to create demand for dollar assets. But that “bullish dollar view is reflected in futures markets positioning. Trades against the euro look especially crowded, with short positioning almost three standard deviations from the mean.”

Then there’s the “malign path” to a higher dollar: a global economic slowdown that would trigger “safe-haven buying.”

This triggers a chain reaction. To prevent its currency from going to heck, the central bank ends up selling its foreign exchange reserves and buying the local currency. This “tightens domestic financial conditions,” just when the ballooning issuance of US-dollar corporate debt in EM countries to lock in lower interest rates – see Russia – has created “pockets of vulnerability.” To attract liquidity, EM countries raise rates. But these rates trigger “slowdowns and currency gyrations.” Major crises have been the result.

And speculators can muck up the scenario: short-term fluctuations in currencies are often the result of “flows and investor sentiment – which both can turn on a rupee.”

But is the dollar rise a sure thing? BlackRock hedges its bets: “Forecasting currency movements has created many orphans.”

The problem: these stubborn currencies don’t always play along. Turns out over periods of five years or more, currencies tend to behave in line with fundamentals, such as interest rate differentials and various central bank machinations. But not in the short or medium term.

“Getting the direction right is one thing; getting the timing right is another,” BlackRock says. Appreciation cycles in the trade-weighted US dollar tend to last about six to seven years. But here is the problem: “Expect air pockets along the way.”

The Fed has engineered the long-term destruction of the dollar that exceeds even that of the currencies in the US Dollar Index, as the chart going back to 1973 shows. But there have been two periods when the dollar soared for years (shaded areas). BlackRock supposes that we’re now in the third such period (shaded area on the right). But mind the “air pockets.” For example, from August 1998 to October 1999, in the middle of the last appreciation cycle, the dollar fell 7% against the currencies in the index: 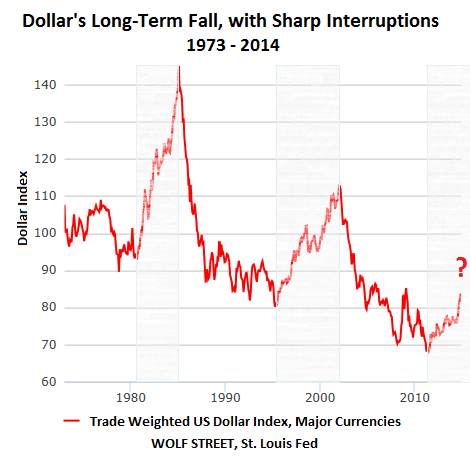 So the stronger dollar might remain elusive in 2015. There are reasons beyond the fact that the trade is too crowded. BlackRock cites the “Pavlovian tendencies” of the markets that have been “conditioned to wait for monetary policy to dictate market moves.” They might hold their fire until the Fed gives the go-ahead. In this case, “the US dollar will only take off when Fed Chair Janet Yellen fires off her first rate hike.”

That might not happen. Instead, the Fed might refuse to raise rates because of “growth disappointment (it has happened before).” And then, there is “an even worse scenario for dollar bulls: US economic momentum stalls, leading to expectations for a fourth round of QE.”

That might cause the dollar to return to its norm and sag once again. As the above chart shows, it’s unrewarding to be a dollar bull long-term. The dollar has been slated for destruction, but the Fed wants to accomplish this over many years, rather than all at once. And only occasionally do things get out of hand, and the dollar rallies for a few years – enough to infuse a lot of false confidence.

On the surface, BlackRock is in a bullish mood and is gung-ho about the US economy. Beneath the surface of its 2015 Investment Outlook, there are dire warnings, including of “financial instability,” a euphemism for “crash.” Read… How Asset Manager BlackRock Gave Me the Willies About 2015