The phenomenal Fed-triggered feeding frenzy in stocks on Wednesday and Thursday was paralleled in the junk-bond market. Energy related junk bonds had gotten shredded over the past couple of months, as the price of oil has collapsed. The sell-off started spilling over to non-energy junk bonds. Tuesday, the day before the Fed’s announcement, junk bonds suffered their largest drop since October 2011. And just as all heck was breaking loose, and as yields were getting painfully high for our spoiled zero-interest-rate conditions, the Fed rode to the rescue once again to bail out the markets with its vague verbiage about being “patient.”

The markets interpreted this to mean whatever they wanted to: The stock market thought rates would stay at zero forever, sending stocks into a frenzy. The Treasury market thought rates would rise sooner than expected, sending 10-year Treasuries into a rout. And the junk-bond market had its own interpretation, in line with stocks, not Treasuries, unleashing the sharpest rally since August 16, 2011. It more than filled the hole left behind by Tuesday’s massacre and allowed junk bonds to end the week with a gain. Halleluiah, thank you Fed.

OK, it wasn’t enough. Over the two-week period, the average remains 157 basis points in the hole. And it’s down 536 basis points for the year. This chart of S&P’s High-Yield Corporate Bond Index, via LCD, goes back to the peak of the junk-bond bubble in June. Since then, junk bond values have dropped nearly 8%.

Investors have started to vote with their feet. All kinds of institutional investors hold junk bonds, but retail investors – the “dumb money” – hold them in their bond mutual funds or ETFs, often unaware that their bond fund is goosing its yield with junk. And until June, junk bonds were a great deal. 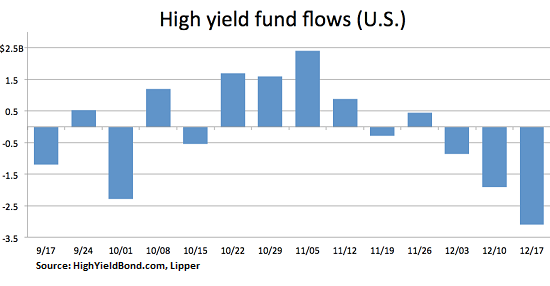 Junk-bond fund assets were also hit by “market conditions” that ate up 1.4% of total assets during the week ended December 17. But the breath-taking I-love-you-Fed rally on December 18 wiped away the tears from that week, for now.

Then there are leveraged loans, the ugly sisters of junk bonds. They’re bank loans to junk-rated over-indebted corporations. Banks can retain these loans, sell them to institutional investors, such as loan mutual funds, or repackage them into Collateralized Loan Obligations and then sell those. CLOs should have “Financial Crisis Material” stamped all over them [read… Treasury Warns Congress (and Investors): This Financial Creature Could Sink the System].

Last year, a record $606.7 billion in leveraged loans were issued. This year started out white-hot too. But then retail investors began pulling their money out of leveraged-loan funds. Tremors went through the market, and issuance plunged to $529.5 billion for the full year.

For the week ended December 17, retail investors pulled $1.8 billion out of leveraged-loan funds, S&P Capital IQ reported. It was the worst outflow since the week ended August 17, 2011, when fretting over a double-dip recession in the US and the debt crisis in the Eurozone hung over investors. And “market conditions” ate up another $1.2 billion during the week.

It was the 23rd cash outflow in a row, and the 34th in 36 weeks. For the year, outflows amounted to $14.9 billion, but that includes the period January through March when leveraged-loan funds were still ballooning. Over the same period last year, inflows reached an exuberant $51.6 billion.

This two-year chart by S&P Capital IQ/LCD shows the monthly totals through November (it doesn’t include the outflows in December) in leveraged loan funds: a magnificent bubble that nearly doubled in 17 months, to peak in March 2014 at $175.1 billion, after which the dumb money began bailing out. By the end of November, it was down $24.1 billion from its peak, not including the outflows so far in December. 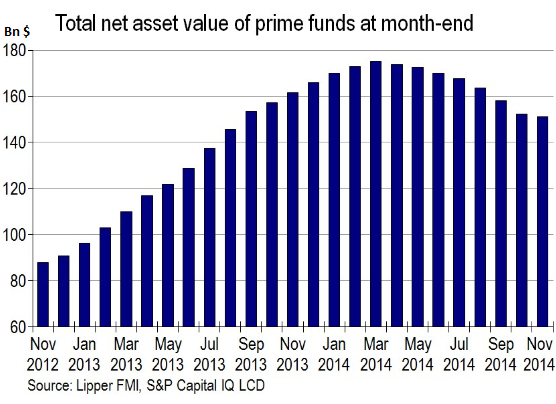 Junk bonds and leveraged loans performed miracles over the past few years. Companies with low credit ratings and too much debt were able to issue even more debt that, thanks to the Fed’s machinations, cost them very little and didn’t reward investors for the risk they were taking on. Some of this money funded the fracking boom in the US. But now that the price of oil has plunged 45% in six months, this debt is becoming precarious. And retail investors’ loss of appetite for it and their determination to let someone else eat the potential losses appear to be, for once, impeccably timed.

June was the peak for a lot of things beyond oil and junk debt, including service and manufacturing activities, as measured by the Purchasing Managers’ Index. And it has been one heck of a downhill ride since, culminating in a December dive. But this time, there is no polar vortex to blame. Read…   Already Crummy US Economy Takes a Sudden Hit