The Fed yesterday, in a fit of its typical though inexplicable optimism, raised its projection for economic growth. In September, it had projected that the US economy would grow between 2.0% and 2.2% in 2014. Now it raised its “central tendency” to a growth of 2.3% to 2.4%. That type of measly economic growth is far below the ever elusive escape velocity that Wall Street keeps promising without fail every year to justify sky-high stock valuations.

But now reality is once again mucking up our already not very rosy scenarios.

The service sector, the dominant force in the US economy, has taken another hit. Markit’s Services PMI Business Activity index slumped in December to 53.6, down from 56.2 in November. It’s now nearly 3 percentage points below the average over the last two years (56.4). And it is barely above the terrible growth rate in February (53.3), for which the polar vortex that had covered much of the nation was amply blamed.

Here is a chart of the shrinking services PMI. The peak was in June. From that point of maximum exuberance, it has been one heck of a downhill ride. Note the sudden no-polar-vortex plunge from November to December. 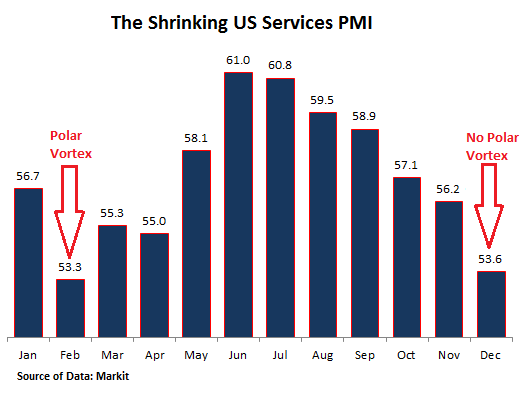 This time, there were no polar vortices to blame. But there were plenty of business reasons.

Incoming new work was the lowest in nine months, with some survey respondents indicating that “the economic outlook had weighted on client demand at the end of the year.” The rate of job creation dropped to the lowest since April, with some respondents citing softer new business as reason.

The Composite PMI, which combines the Services PMI and the Manufacturing PMI, dropped sharply from 56.1 in November to 53.8 in December. It has been on the same trajectory as the Services PMI, with the peak in June, followed by a downhill ride that culminated in a sudden plunge in December that left it below February’s polar-vortex low! 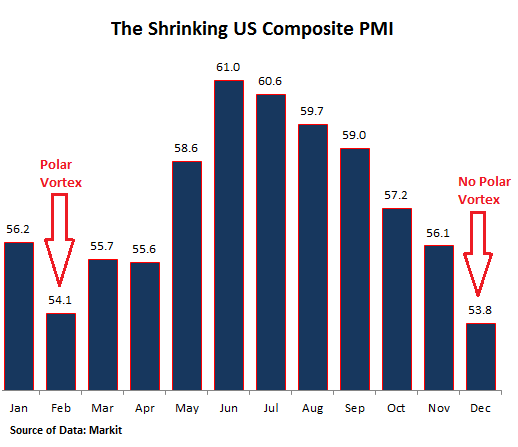 The December swoon points to the weakest economic expansion since October 2013, when the economy was tangled up in the hoopla of the government shutdown. Markit chief economist Chris Williamson explained it this way:

The extent of the slowdown suggests that economic growth in the fourth quarter could come in below 2% which, with the exception of the downturn caused by adverse weather in the first quarter, would be the worst performance for two years.

The slowdown is linked to weaker growth of new business as customers becoming increasingly worried about the economic outlook both at home and abroad, with the prospect of higher interest rates cooling demand alongside side rising global geopolitical concerns. Across both manufacturing and services, new business grew in December at a pace well below the rates of expansion seen earlier in the year.

Job creation has also slowed sharply alongside the cooling of demand, and payroll numbers across both sectors showed the smallest rise for eight months. Another bumper month of non-farm payroll growth looks unlikely in December, with private sector payroll growth unlikely to breach the 200,000 mark.

But we live in a world where central banks have succeeded in surgically severing any link between economic reality and the stock markets. They now run on the fuel that central banks feed them. They cling to every word, every indication, however vague, that the free money will continue ad infinitum. And yesterday, the Fed loaded them up with fuel.

It further distanced the theoretical and ever more quaint notion that monetary policy would someday be “normalized” around the world, and that markets would somehow have to figure out how to stand on their own feet. What might such a scenario look like? Central banks still aren’t buying oil as part of their QE, and look what happened.

14 comments for “Already Crummy US Economy Takes a Sudden Hit”