The price of oil plunged once again off the chart on Monday and early Tuesday. At one point, West Texas Intermediate traded below $54 per barrel, though it soon bounced off. Crude is down nearly 50% since June. And over-indebted energy companies with cash flows that range from increasingly uncertain to completely demolished are suddenly contemplating just how deep the abyss might be.

The below-investment-grade bonds these risky companies issued with enormous hoopla and hype to fund the shale revolution and offshore drilling projects, lovingly dubbed “junk bonds,” had been sold to investors on the premise that oil would sell for ever increasing prices in the future, with the understanding that this might allow the company to make interest payments on time and raise new debt to pay off the old debt when it matures.

Even the still uncertain economics of fracking – the expense of drilling coupled with the horrendous decline rates – or the potential environmental consequences and subsequent backlash were elegantly shrugged off on Wall Street, given the ever increasing price of oil.

And investors loved the slightly higher yields these bonds offered in an era when the Fed and other central banks have conspired to expunge yield from the system with the express purpose of pushing investors ever further out into riskier and riskier bets. Investors, driven to near insanity by these central-bank policies, went for the junk bonds with gusto, and it turned into a feeding frenzy that pushed yields down even further, encouraging companies to issue more and more junk at lower and lower yields.

Then what? The answer hovering in the room for junk bond investors, which includes conservative-sounding bond funds that people have in their retirement portfolios: default. A very unappetizing thought.

So investors are losing their appetite for oil and gas junk bonds. As they dump this suddenly crappy-looking paper and as they unwind this once magnificent bubble, prices drop and yields soar. This chart by S&P Capital IQ’s HighYieldBond.com shows just how rapid the decline has been: in July, energy junk bonds (red line) were still trading above 105 cents on the dollar, outperforming overall junk bonds (blue line) during the peak of the junk-bond bubble. Then the Great Unwind set in: 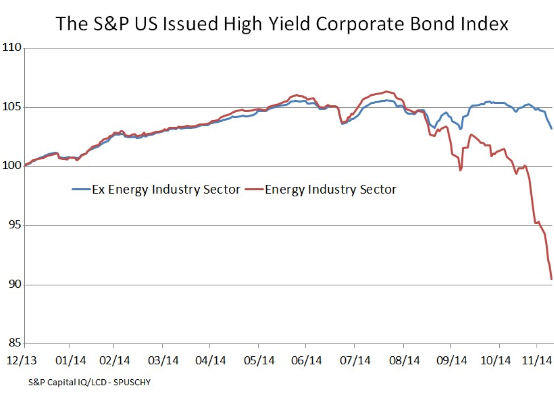 During these times of turmoil in the oil patch and on Wall Street, scores of bond issues become illiquid, and “price discovery” sets in where buyers and sellers are so far apart that no trades take place. And if forced selling sets in, prices collapse entirely. It’s brutal out there.

It’s a big market: energy junk bonds make up over 15% of the $1.3 trillion high-yield market. The rout has started to drag on the overall junk-bond bubble, and junk bonds ex-energy are now also declining.

At the riskiest and erstwhile frothiest end of the overall junk-bond market, it’s getting outright ugly: the effective yield index for bonds rated CCC or lower jumped from the record junk-bond-bubble low of 7.94% in late June to 11.72% on Monday. An increase of nearly 50% in funding cost for companies in that category. Here is a two-year chart with that beautiful spike : 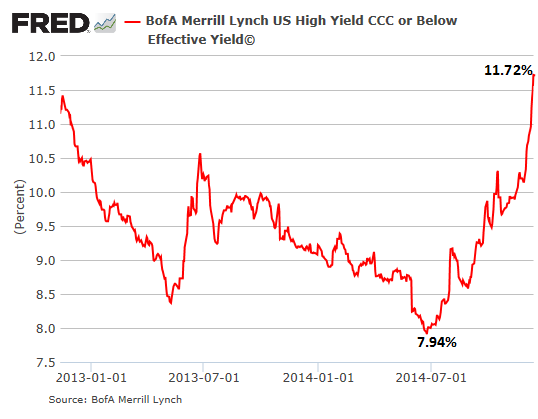 Junk bonds provided $1.3 trillion in funding to risky companies of all stripes, some of which are in terrible shape and likely to default in the near future. But oil drillers saw their revenue model suddenly cut in half, and this scares investors.

They know their favorite junk bonds get in trouble for two reasons:

Leery investors see this, and they try to bail out of the riskiest end of the market, or they start demanding much higher yields to be enticed back in. In the process, they effectively turn off the cheap-money spigot these companies have become addicted to, and must have access to in order to survive. If this process continues over time, investors are effectively defunding parts of the fracking industry, precipitating the very events they’re so scared of.

The plunge in the price of oil is good for consumers, and so Wall Street promises a big boost to US GDP. But what have these folks been smoking? Read…   This Is Why the Oil-Price Crash Will Maul the US Economy