Traders have a way with words. These folks around the world – whoever they may be, from the stay-at-home dad trying to make a living in front of a bank of high-resolution screens to central banks trying manipulate the markets – actually don’t need to use words. They just buy and sell. But in doing so, they become very vocal.

And this is what they have decided: the plunge in the price of oil and the impact of the sanctions are ransacking the Russian economy and finances.

They have expressed their opinions by selling off the ruble over the last few months and particularly over the last few weeks. As I’m writing this, these traders are willing to exchange 53.5 rubles for a buck, down 37% since June. This also happens to be how much the price of oil has dropped over the same period.

And the folks who trade in credit default swaps have decided that Russian debt now has a 22.9% probability of default.

This is what their collective judgment looks like in one chart, going back to early last year. The orange line spiking so beautifully is the probability of default and the collapsing mauve line is the exchange rate of the ruble against the dollar: 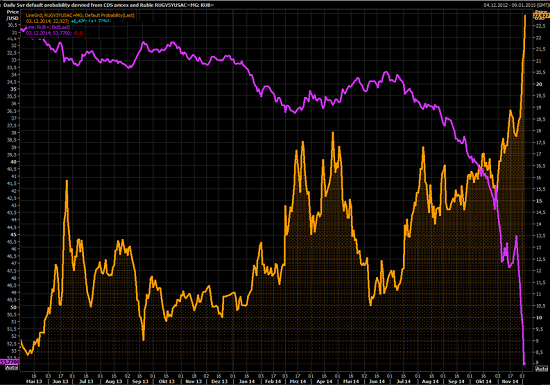 Russia has some issues. That’s what these traders are saying. And Russia will get through them somehow. That’s what they’re also saying, or else the probability of default would be much higher.

Not so for Venezuela. It too has been hit in the gut by the collapsing price of oil. But unlike Russia, which still has large though declining international reserves, Venezuela can schedule its out-of-money date in April, unless it gets bailed out. And there are worries that chaos will “lead to barbarity and people looting.” Read…  Oil War Pushes Venezuela Over Brink, Probability of Default Soars to 84%