When OPEC announced on Thanksgiving Day that it would maintain oil production at 30 million barrels per day, chaos broke out in the oil market, and the price of oil around the globe spiraled into a terrific plunge. The unity of OPEC, if there ever was such a thing, was in tatters with Saudi oil minister smiling victoriously, and with a steaming Venezuelan oil minister thinking of the turmoil his country is facing [OPEC Refuses to Cut Production, Oil Plunges off the Chart].

The bloodletting in the oil markets on Thursday led to some wobbly stability on Friday, and for a while it seemed oil had found a bottom, but then the US stock market closed early while crude continued trading, and suddenly all heck re-broke loose, and the US benchmark WTI plunged again and broke the $66-a-barrel mark before coming to a rest at $66.06. After a near 10% dive in two days, WTI is now down 37% since June! 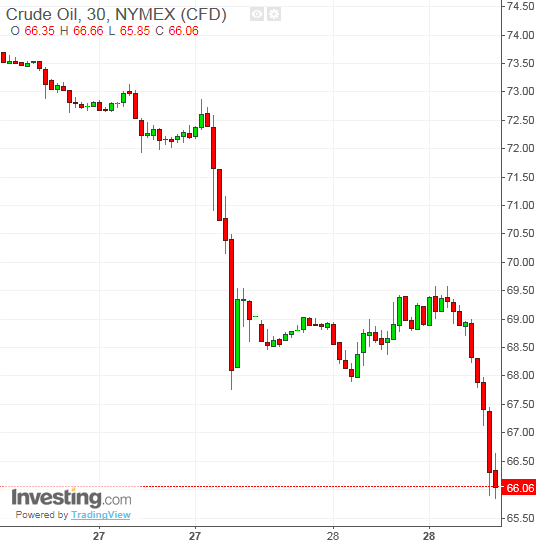 During the closed-door meetings in Vienna, Saudi oil minister Ali al-Naimi told OPEC members that OPEC had to combat the US fracking boom. If OPEC cut output to raise the price of oil, it would lose market share, he argued. The way to win would be to allow overproduction to depress prices to the point where they would destroy the profitability of North American producers. And they’d have to cut production, rather than OPEC.

With Saudi Arabia’s overwhelming power within OPEC, his argument won against objections from desperate members, such as Venezuela, Iran, and Algeria, which wanted a production cut to push prices back up.

“Naimi spoke about market share rivalry with the United States, and those who wanted a cut understood that there was no option to achieve it because the Saudis want a market share battle,” a source told Reuters to make sure the message got out.

Asked if this was a response to rising US production, OPEC Secretary General Abdullah al-Badri essentially confirmed OPEC had entered the oil war against the American shale revolution: “We answered,” he said. “We keep the same production. There is an answer here.”

The bloodletting is spreading.

While the US fracking boom is the official target, Canada’s tar-sands producers are getting hit the hardest. The process is expensive. Their production is largely land-locked and often has to be transported to distant refiners in Canada and the US by costly oil trains. Yet these high-cost producers are getting the least for their oil: The heavy-oil benchmark Western Canada Select (WCS) traded for $48.40 per barrel on Friday, down over 40% from June, the cheapest oil in the world.

Their shares got knocked down in sync: For example, Suncor Energy dropped 9% on Friday, down 27% since June; and Canadian Natural Resources dropped nearly 10% for the day, down 28% since June.

The US shale oil revolution is bleeding as well. Shares across the board are getting hit, many of them outright eviscerated. If the word “plunge” occurs a lot, it’s because that’s what these stocks did on Friday.

The list goes on. Even large oil companies got clobbered:

Then there is the Oil Service sector.

The Market Vectors Oil Services ETF dropped 8.9% for the day and has plummeted 34% from June. The current standout is its 10th-most heavily weighted component, Norway-based SeaDrill which had announced that it would cut its dividend to zero to deal with its mountain of debt, given the current environment. Its shares swooned on Thursday and Friday a total of 28% and are now down 70% from a year ago. The whole sector followed. This is what debt can do when the going gets tough.

Those are among the official targets of OPEC’s scorched-earth oil war. They’ve been hit, and they’re taking on water.

There is collateral damage.

With increasing amounts of oil being carried by oil trains, the railroads, which had been trading near their exuberant 52-week highs in large part due to the lucrative oil-train business, suddenly took a dive on Friday:

But this pales compared to the carnage in tank-car builders. On Friday, they plunged:

The oil price move is already cascading through American industry. Bondholders are next. The US fracking boom was built with debt, much of it junk rated. And this pile of debt is now at the confluence of the collapsing price of oil, high costs of production, and sharp decline rates of fracked wells that force drillers to continue drilling just to maintain their revenues. It’s a toxic mix.

And there are victims of friendly fire, so to speak.

Particularly OPEC member Venezuela, dogged by the world’s highest inflation and worst budget deficit, is running out of options. On November 18, President Nicolas Maduro ordered $4 billion in loan proceeds from China to be transferred from an off-budget fund to one counted in the international reserves. The sudden appearance of $4 billion in international reserves pumped up bondholder confidence: the next day in intraday trading, Venezuelan bonds jumped the most in six years.

But it didn’t last long. Within a week, its international reserves dropped by $1.3 billion to $22.2 billion, Bloomberg reported. Venezuela had burned through one third of the Chinese money in one week. Venezuela must have much higher oil prices. Unless a miracles happens, or unless China bails it out altogether – at a steep price – the country is headed for default.

Russia, third-largest oil producer in the world, after Saudi Arabia and the US, also got hit, as did Norway, and their currencies have been brutalized [Ruble Freefall: And the Ugliest Currencies Are?]

But this time it’s different.

This time, OPEC is trying to depress oil prices. In prior years, OPEC tried to push prices as high as possible, but without killing the global economy and demand for oil. The balancing act led to high oil prices that consumers struggled to pay but that allowed the US shale revolution to bloom. If oil had remained at $40 or $50 a barrel, fracking wouldn’t have taken off. OPEC was, ironically, one of the enablers of fracking (yield-desperate investors, driven to near insanity by the Fed’s zero-interest-rate policy, were the other one). And now fracking is threatening to make OPEC irrelevant.

Saudi Arabia, formerly the dominant oil producer in the world, the country whose mere words could shake up markets and manipulate US policies in the Middle East, and the master of an all-powerful OPEC, is reduced to struggling for simple market share, the hard way.

A lot of people believe that the plunge in the price of oil will be brief, and that it has gone pretty much as far as it can go, given production costs in the US and Canada. But the bloodletting in the US fracking revolution will go on until the money finally dries up. Read…   How Low Can the Price of Oil Plunge?