The 35% plunge of the price of oil since June and the sanction spiral imposed on Russia are wreaking havoc on the ruble. Oil and gas revenues are crucial to the finances of the Russian government and to the oil-and-gas dominated economy. So the ruble continues its free-fall that started in June. It hit a new low of 50.21 rubles to the dollar. Down 33.55% year to date, and down 32% since June.

After the collapse of the Soviet Union, the ruble got wiped out completely. When I went to Russia for the first time in 1996, it traded for 5,000 rubles to the dollar and was falling so fast that all prices were denoted in dollars and payable in rubles at the exchange rate of the day, which every Russian knew. By 1998, during the “ruble crisis,” Russia defaulted on its debt and devalued to ruble to where it lost practically all its value from just a few years earlier. A process no Russian will ever forget.

The distrust in the ruble as a store of value has been so ingrained that chitters in the world incite Russians to dump their rubles for dollars and euros. Their distrust goes far beyond the distrust many Americans have in the dollar!

This chart shows the ruble’s dual collapse against the dollar since 2003: 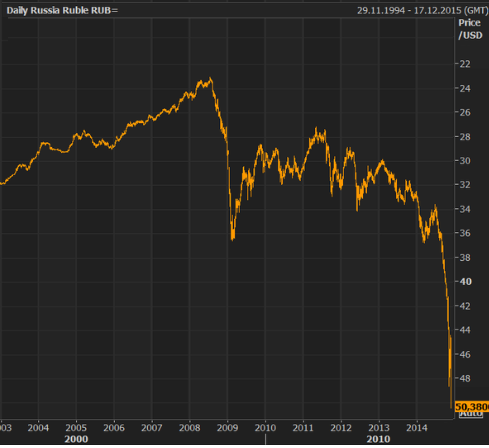 The collapse during the financial crisis, when fretting Russian were trying to get out of their rubles while they still could, was partially undone in subsequent years. But since 2011, the descent has started all over again and over the last 6 months has turned into a free fall. 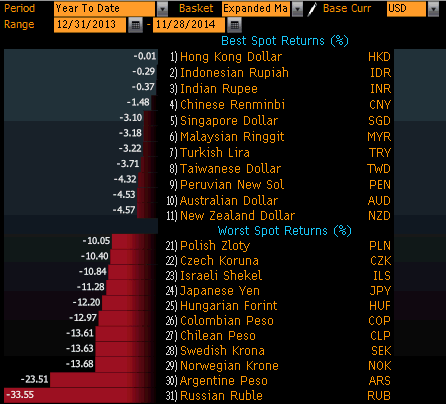 So the ruble holds the most inglorious position, below even the Argentine peso. But they’re in good company, though far ahead. Third ugliest: the Norwegian Krone. In Norway, a super-wealthy country with a tiny population and an immense sovereign wealth fund, the production and export of oil and natural gas dominate the economy. And the havoc in the oil markets is starting to show.

And the yen? The Bank of Japan is desperately trying to demolish the yen, though it remains right above the Hungarian forint and other troubled currencies that are desperately being propped up by their central banks….

There was chaos in the oil market on Thanksgiving Day. And it made for a very ugly chart. Read…   OPEC Refuses to Cut Production, Oil Plunges off the Chart

1 comment for “Ruble Freefall: And the Ugliest Currencies Are?”