On any given day, Janet Yellen is busy squinting at 19 essentially meaningless labor market graphs on her “dashboard”, apparently looking for evidence that ZIRP is working. Well, after 71 months of zero money market rates – an unprecedented financial absurdity – there are plenty of footprints dotting the financial landscape.

But they have nothing to do with sustainable jobs. Instead, ZIRP has fueled myriad financial bubbles and speculations owing to the desperate scramble for “yield” that it has elicited among traders and money managers. Indeed, the financial system is literally booby-trapped with accidents waiting to happen owing to the vast mispricings and bloated valuations that have been generated by the Fed’s free money.

Nowhere is this more evident than in the subprime auto loan sector. That’s where Wall Street speculators have organized fly-by-night lenders, as Bloomberg reported, who make predatory 20% interest rate loans at 115% of the vehicle’s value to consumers who are essentially one paycheck away from default.

This $120 billion subprime auto paper machine is now driving millions of transactions which are recorded as auto “sales”, but, in fact, are more in the nature of short-term “loaners” destined for the repo man. So here’s the thing: In an honest free market none of these born again pawnshops would even exist; nor would there be a market for out-of-this-world junk paper backed by 115% LTV/75-month/20% rate loans to consumers who cannot afford them.

Indeed, instead of the BLS concocted “quit rate” and other such aggregated data noise about the nation’s massive, fragmented, dynamic and complicated complex of thousands of local and sectoral labor markets – about which the Fed can and should do nothing – Yellen might be gazing at the $1.6 billion in bids attracted earlier this year by Prestige Financial Services of Utah. That occurred in the junk bond market, which the Fed does heavily impact, and could not have possibly happened in the absence of ZIRP.

In a word, the $390 million offering was 4X oversubscribed–even though the bonds were  issued by a newly minted financial conduit that has no operating history; and its only assets are piles of 20% interest rate loans made to people who have been in bankruptcy!

“Investors, seeking a higher return when interest rates are low, recently flocked to buy a bond issue from Prestige Financial Services of Utah. Orders to invest in the $390 million debt deal were four times greater than the amount of available securities.

What is backing many of these securities? Auto loans made to people who have been in bankruptcy.

An affiliate of the Larry H. Miller Group of Companies, Prestige specializes in making the loans to people in bankruptcy, packaging them into securities and then selling them to investors.

“It’s been a hot space,” Richard L. Hyde, the firm’s chief operating officer, said during an interview in March. Investors are betting on risky borrowers. The average interest rate on loans bundled into Prestige’s latest offering, for example, is 18.6 percent, up slightly from a similar offering rolled out a year earlier…. To meet that rising demand, Wall Street snatches up more and more loans to package into the complex investments.” (NYT)

Now the purpose of the financial meltdown in 2008 was to purge the market of exactly this kind of dodgy lending by predators like Prestige Financial Services. And initially that’s exactly what happened.

As shown below, the subprime market shrunk from more than $125 billion at the bubble peak in 2007 to only about $60 billion by 2009. Market discipline was finally being brought to bear in this dodgy corner of the junk credit market and sketchy loan books were being drastically liquidated. That in turn meant that the US auto market was being downsized to a more sustainable level of demand based on consumer incomes, not unrepayable debt.

But the cleansing action didn’t last long. The Fed’s lunatic ZIRP policy steadily forced more and more institutional bond managers, pension funds, insurance companies and retail mutual fund investors desperate for yield into junk ABS paper. So as shown below, the subprime auto sector—something which should exist only on the fringe of the financial markets, if at all—came roaring back. At the end of 2013, it had re-attained the bubble peaks of 2007, and by the end of this year will be at all-time highs.

Indeed, from the low point in early 2010, the subprime market has increased by more than 100% or double the rate of growth in prime auto loans, which have also expanded at a heady pace (40%) relative to the tepid growth of consumer incomes (12%) during the period. Stated differently, the auto sector is being pushed back into an unsustainable boom based on the very same bubble finance distortions that sent the entire industry—led by GM, Chrysler, Delphi—into the calamitous bankruptcies of 2008-2009. 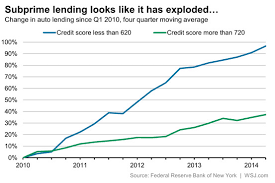 It is only a matter of time before the boom in auto junk implodes under the pressure of rising default rates. As in every prior junk bond cycle, the Wall Street purveyors of this crappy paper have trotted out data to show that default rates are modest and that 20% interest rates being paid by the underlying borrowers can cover a multitude of sins.

But that is an illusion stemming from the confluence of two factors. First, the renewed boom in subprime auto loans is only a few years old. This means that the loans are not yet seasoned and that the true loss rate is being badly obfuscated by a rising denominator (total loans outstanding) and an understated numerator (reported defaults to date).

This transient illusion of low default rates has appeared in each of the three boom-and-bust cycles that have afflicted the junk market since it first appeared in the late 1980s.  And in the case of auto loans, the lag effect in default rates is especially severe because the used cars and low-end new cars that are financed for 5-8 years terms in the sub-prime market suffer accelerating depreciation of value as vehicles age.

Secondly, we are in the sixth year of this so-called recovery, but the Fed has not banished the business cycle. So there will be another job market dislocation in the not too distant future, meaning that subprime borrowers living from paycheck to paycheck will experience a surge of defaults. And in the process, auto sales will plunge, dealer inventories will be liquidated, auto production will be curtailed and Janet Yellen’s dashboard will be suddenly covered with arrows heading in the wrong direction.

And that’s not the half of it. Financial distortions and deformations from the Fed’s free money cascade through innumerable channels of the financial system. For instance, the same mis-priced debt that fuels subprime auto lenders is also used to fund auto leases.

Accordingly, there has been a massive surge in cheap leases because projected “residuals” (i.e. recovery value at expiration) are being over-estimated (no recession ever again) and the carry cost of leased vehicle portfolios has been made dirt cheap by the Fed’s financial repression. Not surprisingly, the share of new vehicle sales accounted for by leases is at an all-time high of 25%.

But there is a huge problem lurking just around the corner. The number of expiring leases will double during the next three years, meaning that the used car market will be flooded with vehicles. In turn, that will drive down used car prices and cause sub-prime borrowers to be pushed even deeper underwater on their loans. In due course, they will consequently default at even higher rates than would otherwise occur; and the losses after the repo man recovers the vehicles will be proportionately larger, as well.

The flip side is that the number of cars returning from leases is expected to more than double from about 1.7 million last year to nearly 3.5 million in 2017, according to Manheim, the company that runs most of the auctions where dealers sell those off-lease vehicles

In short, there is a reason why capitalism requires honest price discovery in financial markets. Without it, false signals quickly flow through the real economy, causing booms and busts that are not an inherent result of the free market but the artificial and destructive consequence of central bank intervention and manipulation.

Thus, the primitive and destructive game of monetary central planning pursued by our monetary politburo is particularly exposed by the impending disaster in the auto junk market. That is to say, the labor market is a trailing indicator and Yellen and her band of money printers are watching it, as it were, in the rearview mirror.

Instead, they might scroll-up on their dashboards the attached Bloomberg story. At least they could not plead that the next financial meltdown arrived mysteriously on a comet from outer space. By David Stockman, David Stockman’s Contra Corner

Bank regulators fret about reckless auto lending and risks to the banks. But when this doozie pops, it will hit sales, production, services, railroads…. It won’t go away quietly. Read…  Debris from Subprime Auto Loans to Ricochet across Main Street

4 comments for “The Next Auto Subprime Bust”