“Unfortunately, the numbers were not good,” Prime Minister Shinzo Abe admitted in a speech. He was right, even if it was an understatement.

Ever since “Abenomics” became a word, readers of WOLF STREET and its predecessor site (the one with the ghastly name) have known that this economic religion would fail in improving the real economy. You can’t blame Abe: the people chose it via a democratic process. However, its prodigious amounts of money-printing might succeed in inflating select asset bubbles, destroying the currency, and wiping out consumers’ purchasing power.

If it culminates in a big bout of inflation and more destruction of the yen, it will in effect solve Japan’s number one problem: its mountain of government debt.

What the BOJ will never allow is a government debt crisis. Japan has never bought into the doctrine of a free market. The Japanese viscerally hate chaos of any kind, and particularly the kind that a debt crisis would bring on. So the BOJ has an iron grip on the government bond market, buying up every JGB that isn’t nailed down. This amounts to a yield-peg that will keep yields near zero and to a guarantee that those JGBs will not lose their nominal value come heck or high water – though the yen they’re denominated in is scheduled for destruction.

But every debt is someone’s asset. Since nearly all of that debt is held directly or indirectly as an asset by Japanese institutions and individuals – and increasingly by the BOJ – that strategy of destroying the debt by destroying the yen will also destroy part of their wealth. The process is well underway: the yen has lost about 35% of its value against the dollar since Abenomics became a word!

The destruction of the purchasing power and wealth of the people also drags down the real economy. And so the GDP fiasco that the Cabinet Office released today is no surprise to WOLF STREET readers [my whole series is in… Japan’s Juggle].

In the July-September quarter – the second quarter in Japan’s fiscal year – GDP dropped 1.6% on an annual basis, or 0.4% from prior quarter. That April-June quarter had already been the worst quarter since the financial crisis with a 7.3% plunge on an annual basis, or 1.9% plunge on a quarterly basis. It was worse even than the two quarters of and following the terrible earthquake and tsunami of March 11, 2011, that briefly brought the economy to a halt. That April-June quarter was so bad that the media-darling  economists predicted that some kind of bounce would be inevitable.

Here is what this fiasco of Abenomics looks like, annotated: 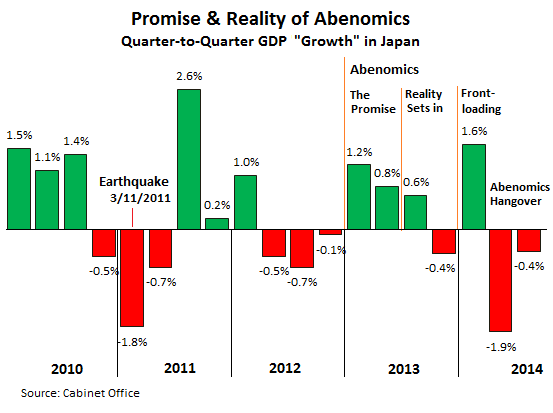 The chart shows how the hype of Abenomics initially created a lot of excitement. Then reality set in. This was followed by the brief but thrilling era before the consumption tax hike that triggered a vast bout of front-loading, much like the prior consumption tax hike 17 years ago had triggered. This was not a surprise, not to readers of WOLF STREET. But Abenomics apologists were claiming at the time that Abenomics was performing miracles.

Then the hangover set in as the tax hike took effect on April 1. The prior tax hike had been followed by a steep and long recession. This one appears to follow the same procedure. Again, no surprise.

However, it came as a huge surprise to the media.

Japan’s real GDP shrank 1.6% on an annualized basis as firms cut inventories and held back on capital investment. None of the 18 economists surveyed by The Wall Street Journal had forecast a contraction; the median forecast was for a 2.25% expansion.

Which 18 economists did the WSJ ask? Obviously, only those voices were included in the survey that toed the established line.

Even hedge funds and other foreign speculators that drive the Japanese stock market were taken by surprise, though they shouldn’t have been: the Nikkei stock index, which had surged to a seven-year high after the BOJ’s recent promise to print even more yen forevermore, plunged 3% on the news.

Now they’re already clamoring for more Abenomics goodies, more money printing promises and more deficit spending and “supplementary budgets,” as the endless series of stimulus packages are called. Which is precisely what got Japan into the very fix that it is in now.

The BOJ’s latest magic announcement was made with impeccable timing: on Halloween, which is increasingly popular with adults in Japan. Read… Bank of Japandemonium Resorts to “Monetary Shamanism,” and all Heck Breaks Loose