The phenomenal credit expansion in China has taken many forms and has accomplished many phenomenal things, from building entire ghost cities to turning ambient air into a toxic cocktail. In the process, the credit bubble turned China into the second largest economy.

Some of this freshly created money has been spread around. Hence, the growing middle class. Those with significant accumulation of wealth are trying to get some of it out of China before it all blows up or before the corruption crackdown or a purge or some other business misfortune takes it all down.

In China’s state-controlled system, credit expansion is largely done by state-owned banks that have to keep lending no matter what. Then there’s the increasingly important shadow banking system. And finally, the People’s Bank of China – and no central bank is a match for it.

The chart below compares the growth of the balance sheets of the major central banks, starting in 2003, when the index was set at 100. While the other central banks – except for the ECB – kept their balance sheets nearly level between 2003 and the Financial Crisis, the PBOC’s balance sheet (top orange line) ballooned. By the time the Fed (yellow line) and the Bank of England (red line) made their moves in 2008 to bail out toppling megabanks, other financial institutions, and the largest investors in the world, the balance sheet of the PBOC had nearly quadrupled.

Note the tiny Swiss National Bank (purple line) which is desperately trying to defend its franc cap by buying euros and dollars and selling newly printed francs. It works, but for how long?

And note the Bank of Japan (green line) at the bottom. In 2003, after years of QE, its balance sheet was already relatively large, but in 2012, and particularly in early 2013, it set out on a record-setting binge, from an already large base. 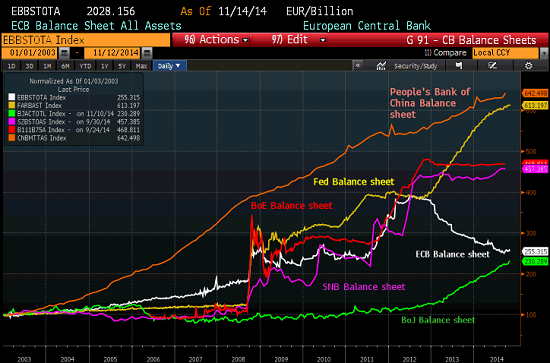 No central bank – not even the Fed with its heroic efforts at the printing press – is a match for the PBOC. Its balance sheet has maintained that number one position in terms of growth since 2003. Its expansion continues unabated and with renewed vigor. It makes the heroic Fed look like a bunch of amateurs.

These balance sheets are additive, forming a multi-trillion-dollar pile of newly created money, the largest monetary experiment ever that created the greatest asset bubbles ever, to which any form of non-catastrophic exit remains elusive. But hey, no problem. Full speed ahead.

There are cracks in the veneer, however. Once soaring gaming revenues in Macau, the world’s largest gambling hub where the Chinese go to bet and funnel their money around China’s capital controls, are plunging faster than during the financial crisis. This indicator of the Chinese economy is flashing red. Read…   What the Heck is the Deal in Macau?