The undisputed growth industry that has done so well since the very beginning of the Financial Crisis, and in fact since 2001, after having plateaued or even declined for years before then, is involuntary part-time employment. Now it turns out, according to a study by the Atlanta Fed, that these folks are also getting hosed when it comes to wage “growth.” With big implications for the economy on one side, and corporate profits on the other.

For much of the 90s, part-timers hovered just above 23 million on a flat trend line. But with the recession of 2001, part-time employment began to thrive, and continued to thrive afterwards, reaching 25.4 million by June 2007. In November 2007, just before the Great Recession officially started, there were 24.8 million part-timers. In 2008, amid soaring layoffs as the financial house of cards was coming down, part-time employment jumped!

By July 2009, there were 27.7 million part-timers, even as full-time employment was being decimated. That’s an increase of about 3 million since the beginning of the Great Recession – almost 12%! 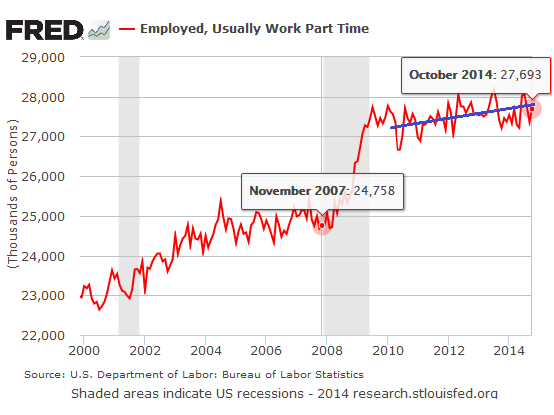 During the Great Recession, this shift to part-time employment was considered temporary, something that would go away during the recovery. Then during much of the “recovery,” it was still considered temporary, something that would go away once the recovery would reach “escape velocity.” Now, that illusory surge in the economy, trotted out for five years in a row to rationalize soaring stock prices, has become a pipedream [read… Fed: Forget “Escape Velocity,” Not Gonna Happen, Ever].

And part-time employment has become a dramatic, still increasing, and apparently permanent shift in how business is done in the US.

With a special effect: A report by the Atlanta Fed dissected wage “growth” of part-timers and full-timers, based on hourly workers (about half of all people employed in 2008). The analysis does not include data for workers with monthly or annual salaries and other compensation packages. This focus on workers with hourly wages produces “the cleanest measure of the price of labor: a wage rate for each hour they work.”

And it gets worse: The analysis is based on nominal wage data – not adjusted for inflation. But during the years of the analysis, the Consumer Price Index rose at annual rates from nearly 4% in 2011 to 1.7% in the most recent period of the study. 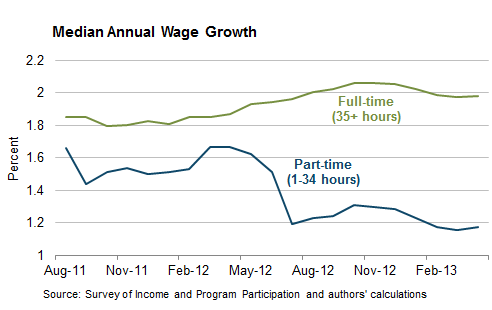 The chart shows that nominal wages of full-time hourly workers couldn’t keep up with inflation in 2011 though it has since vacillated between falling further behind inflation and gaining on it. That’s bad enough! But part-timers got outright hosed by inflation, with their wages, even in this aggregate 3-year smoothened line, never growing fast enough to keep up with it. And they’re still falling behind! 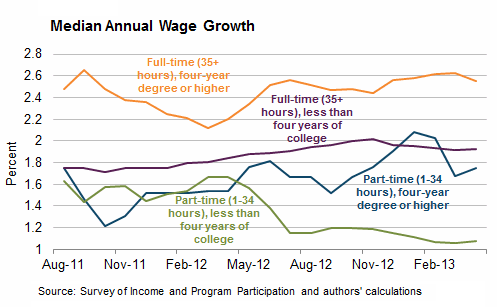 The wage data of part-timers with college degrees begs the question: How many lawyer-bartenders, English-major-waiters, or mechanical-engineer-retail-sales-clerks are there? That’s the other phenomenon of this wondrous jobs recovery.

It all makes sense from a corporate point of view. During the Great Recession, companies sped up their strategic decision to switch to part-time schedules wherever possible, for a number of reasons, including lower hourly wages, fewer or no benefits (primarily health insurance), and greater scheduling flexibility. These folks work only when the company needs them. It translates into lower cost per each hour worked, multiplied by fewer total hours worked. These cost reductions performed miracles on corporate profits.

And they could because desperate workers, after waves of layoffs, took whatever jobs they could get. College graduates piled into the labor markets. While many of them have found good full-time jobs, plenty of them haven’t. They face a triple whammy – the same factors that companies benefit from: fewer hours, at a lower hourly wage that doesn’t keep up with inflation, and often no health insurance.

The corporate decision to cut payroll expenses by switching to part-timers is one factor in this game. The other factor is the Fed’s insistence on forcing inflation into the system to push down real wages and supply the business community with cheap labor. But these workers too are consumers and potential home buyers. And faced with these conditions, they make terrible consumers, and they can only dream of buying a home.

On the other end of the spectrum, job cut announcements in tech doubled from a year ago. Worst year since 2009. Read… Layoffs Explode In America’s Big Old Tech Companies

7 comments for “This Chart Shows How The Biggest Problem in the Jobs ‘Recovery’ Keeps Getting Worse (by the Atlanta Fed!)”