Since the financial crisis, the government of the UK and the Bank of England have jumped through hoops and twirled around in extraordinary gyrations to bail out one of the largest financial centers in the world, the uniquely powerful and at once unaccountable speck of land, the City of London, an incorporated area within London known as the Square Mile; or rather bail out its financial institutions, its way of doing business, and its bonuses; and along the way, bail out banks further afield.

Done in the now classic way. Key ingredient: the Bank of England printed enormous amounts of money, repressed interest rates, and stirred up inflation, which hit 5% in 2011. But somebody had to pay for it: savers and workers. It demolished real wages and purchasing power of the people who make up the rest of the country. 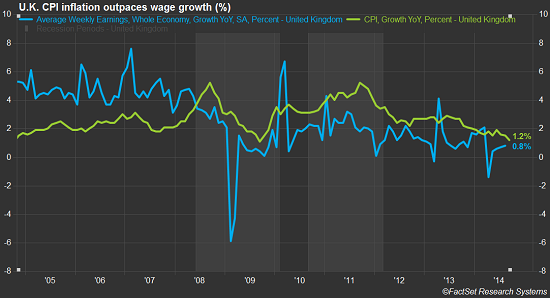 By comparison, here is how American workers fared after the Fed began to bail out the banks, insurance companies, and myriad corporate giants, including Warren Buffett’s financial empire, not only with temporary measures to keep them from toppling, but also with long-term – or perhaps infinite – “solutions,” namely QE and ZIRP. 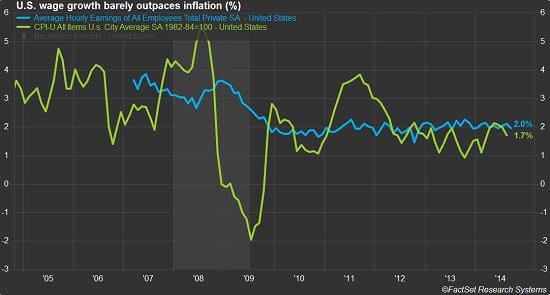 Here is what happened: workers benefited from rising real incomes during the three quarters of deflation in 2009 – which probably was responsible for firing up moribund consumer spending. But it didn’t last long. In 2010 and 2011, a burst of inflation took it all away again.

It’s only during periods of low inflation or actual deflation that modern American workers get real wage increases. Turns out, slight deflation every now and then – to make up for the costs of inflation – is good for workers!

But there is another huge group of people that has been taken to the cleaners: savers. These conservative investors don’t want to lose, in rigged financial markets, 30% or 40% or 50% of what little they have during the last 10 or 20 or 30 years of their lives. Unlike young folks, they have no way of ever earning their hard-earned money a second time, so to speak.

With interest rates on their bank accounts, CDs, and money market accounts reduced to nearly nothing, their income from those assets – $9.5 trillion! – was whittled down to nearly nothing as well, and they had to tighten their belts and curtail their spending.

To these poor souls, the downtrodden conservative investors, Peter Boockvar, Managing Director and Chief Market Analyst at the Lindsey Group, wrote a letter titled, “Dear Saver, May You RIP.” And this is how it concludes:

I wish I had good advice for your savings, but I can’t advise buying stocks that have only been more expensive in 2000 on some key metrics right before you know what, and I can’t recommend buying any long term bond as the yields also stink relative to inflation. With the Fed now saying that the dollars in your pocket are worth too much relative to money in people’s pockets overseas, and thus joining the global FX war, maybe you should buy some gold but I know that yields nothing either. You are the sacrificial lamb in this grand experiment conducted by the unelected officials working at some building named Eccles who seem to have little faith in the ability of the US economy to thrive on its own as it did for most of its 238 years of existence. Borrowers and debt are their only friends. To you responsible saver that worked hard your whole life, may you again rest in peace.

Ironically, the designated losers of central bank policies – wage earners and savers – are the vast majority of the households out there. But it’s hard to get an economy to thrive if the vast majority of its participants are being systematically and relentlessly plundered in tiny insidious increments on a daily basis. Of course, central banks have a solution: get these folks to borrow money and spend it to goose the economy, so that they’ll turn into debt slaves, rather than just impoverished middle-class workers.

But financial assets have now taken a hit, the fretting has started, and new calls for QE infinity are being heard. Read…. ‘This Market is Driven by Psychology and Momentum,’ which ‘Works Really Painfully on the Way Down’

25 comments for “More QE? These Charts Show the Pauperization of Workers in the UK and America since 2008”