Parabolic moves are fun while they last. But the problem is they don’t last.

A parabolic move is a nearly straight-up move in an asset. The move often starts slowly. Then it gains momentum as investors get excited and rush in to buy. This results in large-percentage gains in just a short period of time. That generates even more excitement and an even greater urgency for investors to buy… and prices increase even more.

Then, just as it looks like the asset is going to rally straight to the moon, the parabolic move ends. The market runs out of buyers, the price peaks, and everyone rushes for the exits at the same time. In most cases, the resulting decline takes back all the gains of the previous rally. We saw it with gold and silver in 2011. And we’re about to see it with the U.S. dollar.

Take a look at what happened to silver back in 2011… 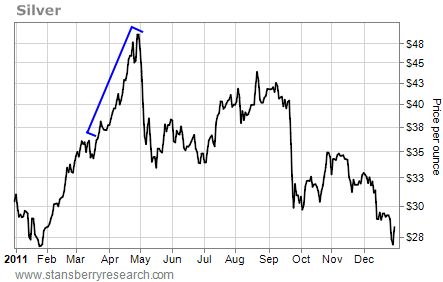 After a rally in February and a good pullback in early March, silver started to rally again – slowly at first. The rally gained momentum in April. Investor sentiment turned wildly bullish for the metal. Silver rallied from $34 an ounce to just above $49. Analysts talked about the possibility of silver taking out its $50 all-time high set in 1980.

That was a six-week, nearly vertical rally. And everybody was in love with the move while it lasted.

But parabolic moves never last. They almost always blow up in spectacular fashion. And that’s what happened with silver. It took just two weeks for silver to give back 100% of the gains from its parabolic rally.

Look at what happened to gold just a few months later… 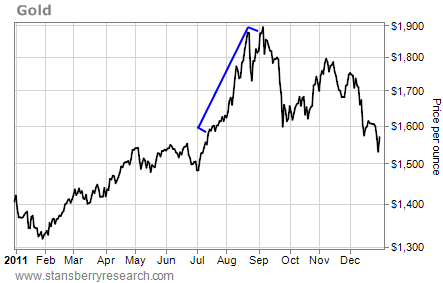 After a rally and a small correction in July 2011, gold kicked off a parabolic move from $1,600 an ounce. It gathered momentum in August. Investor sentiment hit extreme bullish levels. And analysts talked about how the metal could break the $2,000-an-ounce mark. Gold gained $300 an ounce in just about one month. It was a wonderful move while it lasted.

Then it blew up. It took just over one month for gold to give back all of the gains of its parabolic rally.

Now, let’s take a look at the recent action in the U.S. Dollar Index…

The dollar enjoyed a rally in July. Then it consolidated for a couple weeks in August.

Starting in about mid-August, though, the dollar kicked off a parabolic rally. It went slowly at first, then gained momentum. Traders are now wildly bullish on the dollar. They’re bidding the buck higher in anticipation of the Federal Reserve raising interest rates soon – while other central banks keep their interest rates low. Rising rates are generally bullish for a currency. So everyone seems to be piling into the dollar. And the buck has gone parabolic.

There’s no way of knowing for sure when this move will end. But IT WILL END – just as it ended with silver, gold, and nearly every other parabolic move in the history of the financial markets.

And when this move ends, the dollar will likely blow up in spectacular fashion. I expect the buck to give back all of its gains since mid-August. By Jeff Clark, Growth Stock Wire

10 comments for “The US Dollar Is Going to Break Down”