There’s a big opportunity setting up for commodities investors. Thanks to mild weather and plenty of rain, the U.S. is expecting the largest corn crop it has ever seen. But good news for corn supply is bad news for corn prices. The price of the commodity has fallen around 20% this year. And many expect it to keep falling.

While corn prices may be set to fall in the short term, a boom is just around the corner. And investors are about to have a great chance to get in. As regular Growth Stock Wire readers know, commodities like corn are tremendously cyclical. They go through huge cycles of boom and bust.

For example, from mid-2010 to mid-2012, corn prices rose more than 120%. Demand for corn was rising, thanks in part to the increased use of ethanol in gasoline. And poor weather in 2011 and 2012 meant demand was outpacing supply. As a result, corn prices soared to their highest levels ever in 2012… to more than $8.40 per bushel. To take advantage of higher prices, farmers started planting more and more corn. So much that now, supply is outpacing demand, causing corn to enter “bust” mode. 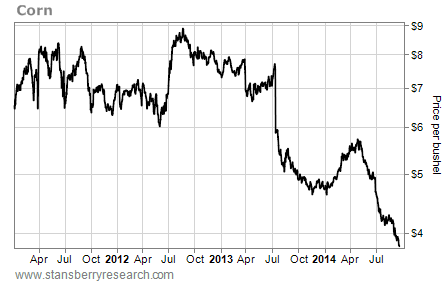 It now costs more to grow corn than it’s worth in the market.

According to Brent Baker, a corn farmer and commodity broker at John Stewart and Associates, the breakeven cost for growing corn right now is $4.25 per bushel. At below $4 per bushel today, farmers are losing money. That’s why Brent says there will be a major shift from growing corn to growing soybeans next year.

This is great news for contrarian investors. And the best time to invest in cyclical commodities like corn is when everyone hates them. After the market leaves a commodity for dead, things often get better. With farmers switching to soybeans next year, the supply of corn will drop. But we’ll still need corn next year. Many of the items we use every day are made with corn – including medications, food, candy, textiles, and ethanol. As corn supply drops and demand holds steady (and even increases), prices will boom.

In the meantime, Brent says based on current market information, his firm believes corn prices could fall to as low as $3.00 per bushel in the weeks ahead. In mid to late October, the market will know what kind of corn yields the northern part of the “Corn Belt” region will have.

And Brent thinks they’ll beat expectations. Brent says the land he farms in the area is running 110 bushels to the acre above its 10-year average. This blows away his previous best year. As more good news about the corn supply comes in, corn prices will likely fall further. That will be when we see the bottom in corn prices. And it’s when contrarian investors should look at it. By Brian Weepie, S&A Resource Report, Growth Stock Wire.

2 comments for “The Crash of Corn, a Contrarian Opportunity?”