The stock manipulation game on Wall Street has been honed to perfection. Everyone is playing along with it, has to play along with it as part of their job, whether on Wall Street or in the financial media, and it must not be doubted or disparaged in any way. Best of all, it performs miracles.

Or rather, it did work. Because now suddenly, the system is inexplicably broken.

Wall Street analysts issue sky-high earnings growth expectations for distant quarters, based on pro-forma, ex-bad-items, adjusted earnings for the companies they follow. These earnings growth expectations are then bandied about to drive up the stock. Hapless souls who dare to point at reality as measured by GAAP-based financial statements are ridiculed; you don’t want to be backward-looking; oh no, you want to be forward-looking. And since no one knows the future, they just make it up.

Market participants eagerly swallow this hook, line, and sinker – there’s nothing secret about it. As that distant quarter moves closer to reality, analysts start lowering their earnings growth expectations, and just before the company actually reports, those expectations are so low that the company’s financially engineered – via share buybacks and other schemes – pro-forma, ex-bad-items, adjusted EPS can most often beat it, even if it looks dreary under GAAP.

This system benefits the stock price in two ways: at first via the sky-high growth estimates that rationalize the stock price; and then when the company beats the much lowered estimates. Companies that somehow fail to beat them get slapped on the wrist for a day or two. It works so well that stocks have done practically nothing but go up.

So for example, on Friday, Bank of America Merrill Lynch supplied more fuel to the market that had been running on low:

Non-financial EPS will rise 35% from 2014 to 2016 (following an expected large rise in 2014). That’s 10.4%/year, vs forecast GDP growth of ~3%/year. This would take profit margins from current near-record levels (depending on the metric) to amazing new levels, an interesting combination with the expected wage growth.

That’s growth of ~130% over ten years, ~8.7%/year. That’s ~3x estimated GDP growth of 2.8% over that period. Especially impressive earnings growth since corporations have diverted so much cash flow (and borrowing) from capex to fund stock buybacks (much of which offsets exercises of executives’ options).

Damn the torpedoes, full speed ahead. Everything soars, according to BofA. “Amazing new levels” of profit margins! Halleluiah. Everything is glorious and multiplies all the other glorious trends. Nothing can go wrong.

So what exactly are they smoking at BofA? I don’t know either. But I know these estimates will come down as reality gets closer. They always do. By then they served their purpose of driving up stock prices. Or should have….

Because now, suddenly there’s a problem.

In its latest report on earnings expectations and reported earnings, FactSet found a startling change in how the market reacts to these fabricated earnings beats. Over the past five years, companies with upside earnings surprises saw their stock prices rise on average 1% from two days before the announcement to two days afterwards; and downside earnings surprises were punished with a 2.3% decline in stock price over the four-day window.

Of the 446 companies in the S&P 500 that have reported earnings for the second quarter so far, 73% have beaten the mean analysts’ earnings expectations, which is about where it has been over the past 12 months. But their reported earnings in aggregate are 4.2% above these lowered expectations, up from 3.2% for the past twelve months. And the upside earnings surprise rate rose to 8.4%. So this stellar “performance,” compared to expectations, should have goosed these stocks even more than normal.

But that’s not what happened.

FactSet found that this time around the market didn’t reward these juicy earnings surprises at all. Stocks of these companies actually dropped 0.1% over the four-day window. And downside earnings surprises got hit with a 3% decline. Here’s the chart (by FactSet) about this gray-hair inducing debacle: 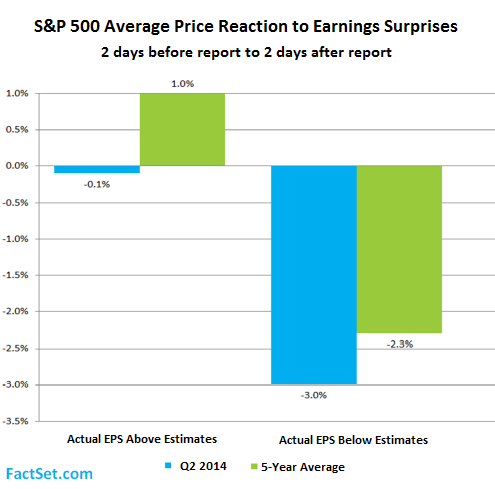 Perhaps it was just a blip. Perhaps the Wall Street hype mongers will soon be able to right the listing ship and go on as if nothing has happened. And perhaps BofA’s glorious forecast of endless dizzying growth that would drive everything to “amazing new levels” will come true. That’s the hope.

But if that phenomenon – beating lowered earnings forecasts by hook or crook is suddenly a slight negative for stocks, and missing them is a big negative – extends over future quarters, it would be a nightmare, nay, a calamity of mega-proportions, for our dear and indefatigable Wall Street hype mongers: they’d lose one of their most effective tools.

It’s also another sign that something has changed in the markets. Hype is being undermined by the timid reappearance of reality. The Fed, which has single-handedly driven this thing to these absurd levels, is shutting down QE and is threatening to do the same to ZIRP. And so the mood is changing because everybody knows that everybody knows that, with the Fed pulling back, all bets would be off.

Junk-bond fund investors are already running for the hills. But now they find out that there are no hills. Read….. Junk-Bond Turmoil just Preliminary, “The Real Panic Will Come With…”

2 comments for “The Wall Street Hype Machine Suddenly Breaks Down”