In the second quarter, Italy’s economy contracted 0.2% from the first quarter, which surprised economists who’d expected, somehow, more growth now that the Italian economy – in parallel with the grander Eurozone economy – is recovering so nicely.

However, reality is not playing along. Crummy exports and a refusal by businesses to pile on inventories were blamed.

Not blamed, of course, was the Italian government, which refuses to pay its suppliers. The arrears, according to the most recent data by the Bank of Italy, amounted to €75 billion ($102 billion). Italy could just issue more bonds to fund what it owes, but that would show to the rest of the world that its debt is actually much higher than the current pretenses. So no way.

Successive politicians have promised for years to pay it, only to push the date when payment would be considered seriously out further and further. So far, no one has forced the government to pay its bills, and so they don’t get paid. The past dues have been sucked out of the working capital of businesses. They strangle the private sector, lead to layoffs, and wreak general havoc in an already very fragile economy.

Based on the government’s failure to comply with Europe’s Late Payments Directive, which requires governments to cut payment delays to a maximum of 60 days, the European Commission commenced an infringement procedure against Italy. But that too may just be decoration. The way it looks, it may never be paid.

Meanwhile, businesses are suffocating. And it shows: over the last 12 quarters, 11 quarters were contractions, with the sole errant quarter being Q1 2014, when the economy booked a tiny growth of 0.1% from the prior quarter and gave rise to an avalanche of hope, now obviated by events.

Here is the chart of the Italian “recovery” from hell. 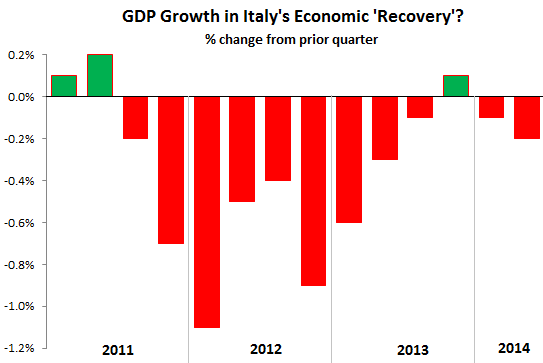 So will the Eurozone “recovery,” if we can call it that, continue?

The largest economy of the bunch, the powerful engine that is supposed to pull Europe out of its quagmire, Germany, is already under pressure. Its economy lives and dies by its exports. But exports to Russia have been plunging. Now economists are cutting their forecasts for Q2 and for the rest of the year. Even the “disaster of 2008” has already been evoked, then hastily denied. Read…. Russia Sanctions Exact Their Pound of Flesh – from Germany