New vehicle sales in July disappointed our dreamy analysts. The seasonally adjusted annual rate (SAAR) of 16.48 million vehicles sold was down 2.4% from June’s revised rate of 16.90 million, which had been the highest since July 2006. The decline touched all categories – cars and light trucks, domestic and foreign.

In dollar terms, sales were even less rosy. The motor vehicle component of the retail sales report by the Commerce Department already showed a drop of 0.3% for June, when unit sales were still rising. Now that unit sales have begun to taper as well, dollar sales are likely to drop even further, to drag down overall consumer spending in July.

Inventories are piling up, and new models are coming down the pipeline, and dealers have to move the iron. So the industry has been whipping sales with all its might, largely through aggressive lending – particularly subprime auto loans – and the bane of automakers: incentives.

In a mad scramble, dealers are stuffing people with bad credit into cars they can’t afford, and finance companies are eager to lend to them. Loan-to-value ratios now average over 100% across the industry. Dealers roll everything into these loans: title and taxes, credit life insurance, and other fluff-and-buff, plus the amount buyers are upside-down in their trade-in. To bring the payments down on these monster loans, lenders lengthen the terms. Subprime auto lending is booming, and charge-offs are rising. “Signs of increasing risk are evident,” the Office of the Comptroller of the Currency had warned in June [Federal Regulator Details Crazy Risk-Taking By Banks, Blames Fed].

The bane of the automakers: incentives

Loans that blow up in the future are a cost that will be eaten by a variety of players, including banks, and if all else fails, by the taxpayer. Incentives are costs – or rather a reduction in revenues – that are eaten on the spot by manufacturers. The incentives in June caused the dollar sales decline in the motor vehicle component of the June retail report. And July is looking even worse.

Overall, TrueCar estimates that the average transaction price (ATP) for light vehicles in July dropped 1.2% from a year earlier, to $30,636. Reason: incentive spending. Because sticker prices of new vehicles went up, not down! As the table of the top manufacturers shows, only Chrysler, GM, and Hyundai bucked the trend. 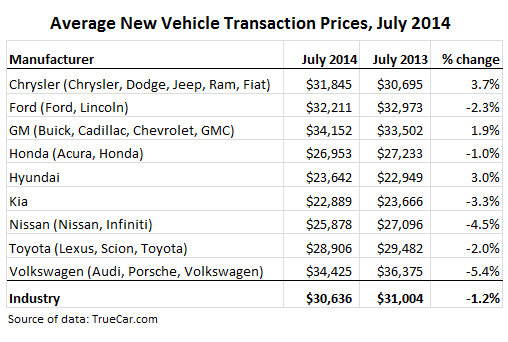 Average incentive spending jumped 7.1% from July a year ago, to $2,731 per vehicle, the highest level since the car-crisis year of 2010. 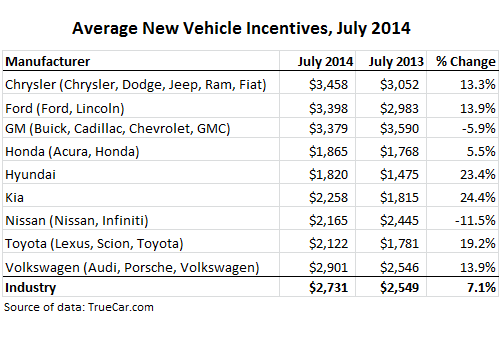 Note that GM’s incentives, though down from a year ago, were by far the highest in the group. GM was spending like mad to whittle away at its bloated inventories, the highest in the industry. It’s just that last year, they’d spent even more!

Booming auto sales over the last few years, from the abysmal levels during the Great Recession, had been one of the pillars of whatever strength there’d been in consumer spending. Consumers can’t afford these cars. So auto lending has soared as well. And consumers with bad credit, no problem; subprime auto lending stepped in. Prices and payments too high? No problem, stretch out the term of the loan. Upside down in the trade-in? Fine, plow the shortage into the new loan and find a lender that will close its eyes….

It all worked. And without the boom in auto sales, consumer spending would have been even drearier than it has been. But someday, these strategies reach their limit. Lenders get scared. Regulators start fretting about losses. Consumers are maxed out. And suddenly, even booming subprime auto lending and the highest incentives since 2010 – the toxic mix in auto sales – can’t move enough of the iron. The check-engine light just came on.

Tech companies are on a white-hot acquisition binge, swallowing anything that isn’t nailed down. But layoffs have started soaring. And it’s getting worse. Read…. What The Heck Is Wrong with Big Tech?

3 comments for “A Toxic Mix for Auto Sales in America”