Late Friday, when the strategy folks at Goldman Sachs downgraded global stocks to “neutral” for the next three months, they gave a reason that would have been peculiar in normal times: “a sell-off in bonds could lead to a temporary sell-off in equities.”

OK, let’s forgive Goldman for flip-flopping. At the peak of the bubble, trigger fingers are nervous, and flip-flopping is the norm. Last week, another Goldman strategist, in a very bullish mood at the time, had raised his year-end target for the S&P 500 to 2,050. But that’s like so last week.

Peculiar because in times less crazy than ours, Wall Street preaches that there is a “rotation” from stocks to bonds and vice versa. When one goes down, the other goes up. You’re supposed to churn your investments accordingly and pay a fortune in fees. Now both are expected to be crummy, after both have been riding jointly to record highs. And according to Goldman’s reasoning, bonds are going to get whacked, and in the process, they’re going to take down stocks.

So let’s see. The 30-year T-bond rose and the yield dropped to 3.24% on Friday, the lowest since before the taper tantrum that started in early May last year when the Fed began floating the unthinkable idea of tapering QE out of existence. This idea, so disturbing at the time, has now become fact. And ZIRP has become topic of the Fed’s cacophony. Fed Chair Janet Yellen herself explained that interest rates might rise sooner and at a faster pace than the market expects [Yellen Warns Investors].

With inflation at 2.1% and rising, the 30-year T-bond is an insane bet on the next three decades being inflation-free. And the 10-year Treasury yield at 2.48% is just a smidgen away from the current rate of inflation. Both bets are self-inflicted punishment. On the short end of the curve, just forget about yield. It’s not worth mentioning. Even the 5-year Treasury yield is only 1.69%. In the Treasury market, investors, beaten into submission by nearly six years of the Fed’s financial repression, are still eagerly lining up to get their hides skinned.

So at that end of the spectrum, the greatest credit bubble in history is still intact.

But the junk bond market is getting nervous. For the week ended Wednesday, investors yanked $2.38 billion out of junk-bond funds, after having already yanked out $1.68 billion the prior week, according to Lipper. According to Barclays, these fretting investors extracted $3.8 billion from high-yield mutual funds and $2.2 billion from high-yield exchange-traded funds. The worst outflows since June 2013, when the taper tantrum was going through its final pangs.

And the spreads between higher-grade and lower-grade bonds are widening. For example, the spread between BBB-rated bonds, the very bottom of investment-grade, and the next step down, BB-rated bonds, the high end of the junk, is starting show some ugly signs (chart via OtterWood Capital). 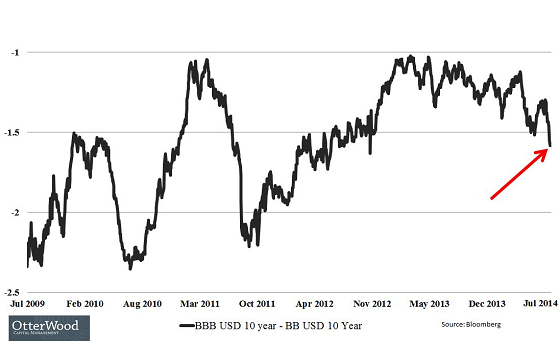 Junk bonds have dropped from their record peaks set a month ago, and yields have risen from their totally insane lows to, well, still insanely low levels. The BofA Merrill Lynch high-yield index rose from 5.3% on June 23 to 5.5% on Thursday. But how bad can it get?

Last year, at the peak of the taper tantrum in late June, the high-yield index hit 7%. Could it get even worse than that?

Bond funds, when faced with a flood of redemptions that exceed their cash balances, will first sell their most liquid goodies and those that have lost the least value. On the surface, little damage is visible to bond-fund holders, and they’re lulled to sleep. When redemptions continue, bond funds have to sell their increasingly unattractive paper into an increasingly illiquid market that the big banks have largely abandoned. It knocks down values, and yields soar. When bond-fund holders figure this out, they dump their shares wholesale, and forced selling commences. Whereby the sellers are all lined up yelling and screaming, and the buyers have gone home.

Only very low prices can lure the buyers into action. The moment when risk suddenly reappears in the equation. This scenario has happened before. And it’s bound to happen again. So how far can CCC-rated junk crash? 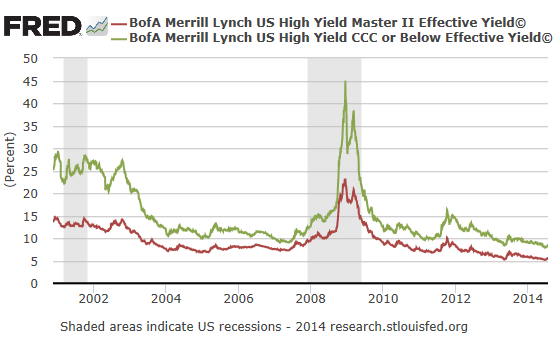 Average yields of junk rated CCC or below ranged from 20% to 30%from late 1999 to early 2003. Values had collapsed. And a number of issuers defaulted. During the Financial Crisis, CCC-rated junk swooned and yields spiked to 45%. Funds were forced to liquidate their holdings. Bond-fund holders took terrible losses. But then the Fed threw trillions of dollars at Wall Street and well-connected investors. They scooped up these bonds, and the Fed’s liquidity bailed out the companies, and in the ensuing junk rally, they made a fortune. Now once again, these bonds are safely tucked away in conservative-sounding bond funds.

The BofA Merrill Lynch CCC yield index has risen to 8.36%, up from the all-time record low of 7.91% on June 23. During taper tantrum in June last year, index pierced the 10% level. But then the Fed, seeing what it had wrought by leaving the market to its own devices, started backpedalling, and yields settled down once again. Everything that happens in the financial markets these crazy days happens because of the Fed.

When serious selling starts into an illiquid market, yields on this junk might very well go back to the range of 20% to 30%. For numerous bond issues, it would mark the end. When the Fed’s QE dries up and ZIRP wonders off into the sunset, some of these overleveraged companies will not be able to refinance their debt, and they’ll default. For junk bond holders, often a total loss.

And Goldman simply pointed out that this scenario that is starting to play out won’t be good for stocks.

Which hasn’t been lost to UBS, the world’s largest wealth manager. It is “very worried” about “the lack of liquidity” that could wreak havoc during the expected sell-off. So UBS reduces risk “over the full spectrum of assets.” Read…. UBS Warns Everything Is Overpriced, Prepares For Sell-Off

1 comment for “How Bad Can The Junk-Bond Sell-Off Get? So Bad It’ll Take Down Stocks”