The 2008 Wall Street meltdown is long forgotten, having been washed away by a tsunami of central bank liquidity. Indeed, the S&P is up nearly 200% from its March 2009 low. Yet four cardinal measures of Main Street economic health convey nothing like a 2X pick-up from the post-crisis bottom.

To wit, in June the count of  breadwinner jobs was 68.5 million or 5% below were it stood as the crisis got underway. Likewise, business investment in real plant and equipment is still 5% below its late 2007 peak. So too with the real median family income at about $53k—its still down by 6%. And unlike past cycles where safety net programs like food stamps shed recipients as the recovery gained momentum, there are still nearly 47 million Americans in the program compared to 30 million in March 2009.

This juxtaposition has been explained away by Wall Street stock touts under the heading that “this time is different”. Markets have allegedly sprung loose from their moorings in the real economy owing to record corporate profits and an upward re-rating of PE multiples reflecting lower than historical interest rates. And, indeed, the raw facts can be marshaled to this end.

As shown in the stunning chart below, profits have doubled as a share of corporate net value added since the turn of the century. Likewise, when measured against GDP, profits are at 60-year highs. 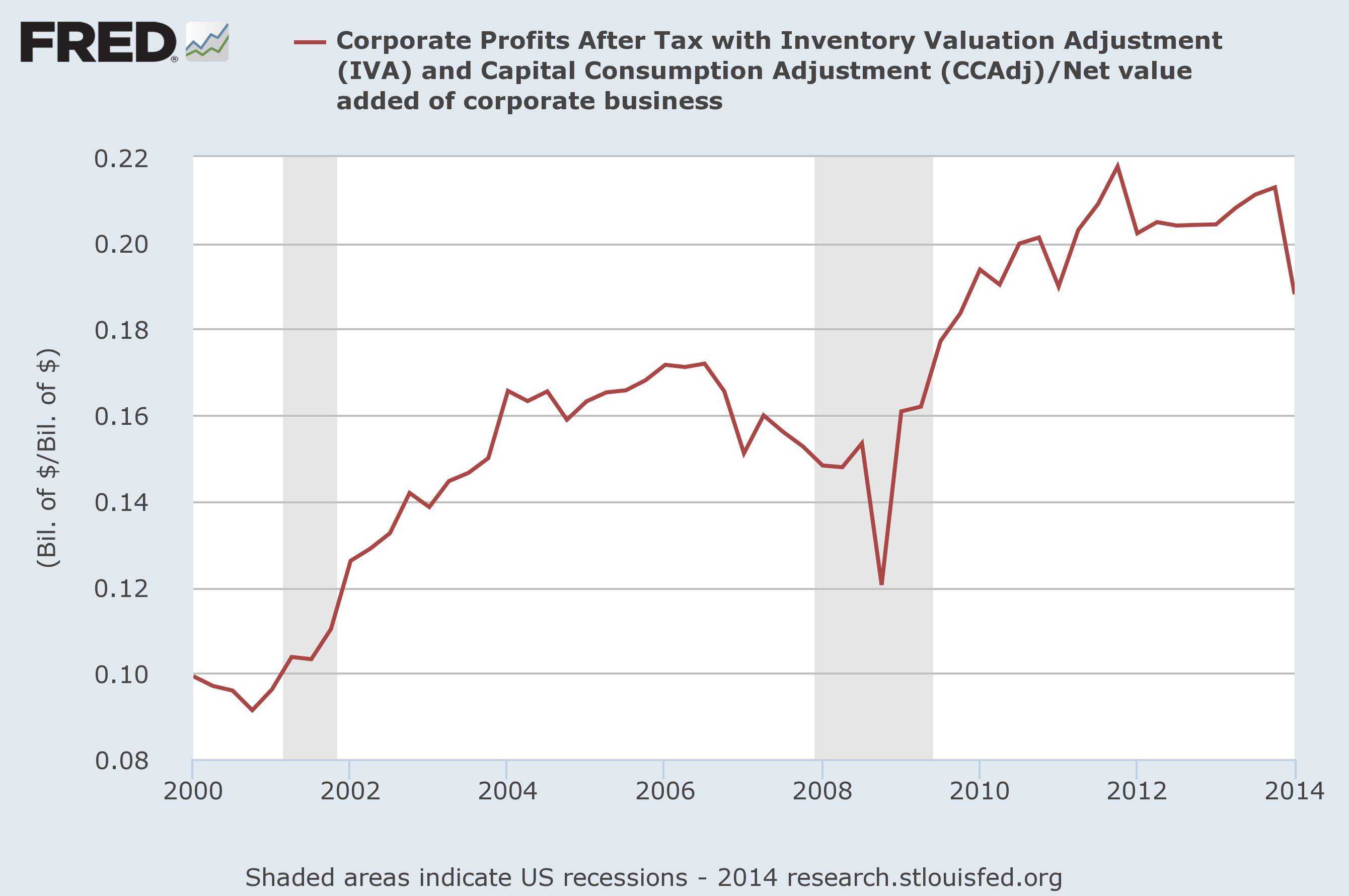 This is just the trouble, however. The robust rate of profit growth during recent years reflects a one-time gain in the profit share of factor income. This gain in all probability cannot be replicated again during the next decade, and, in fact, is extremely vulnerable to the mean reversion so evident in the historical data above. Indeed, that may have already begun during the first quarter of 2014 when the profit share dropped sharply as shown in both charts above.

The same can be said of low interest rates. After an unprecedented 33-year descent, the yield on the treasury benchmark has nowhere to go but higher; and after hitting a QE induced rock bottom of 1.5% in mid-2012, the benchmark yield has, in fact, bottomed and begun a climb toward normalization. No amount of money printing and financial repression by the central banks can keep yields on the massive trove of treasury at a negative after-tax and after-inflation rate indefinitely.

Even without any allowance for profit and interest normalization, PE multiples are at the top of their historic range and at a point of extreme vulnerability where market crashes have invariably occurred in the past. In the case of the S&P 500, for example, reported LTM earnings adjusted for a recent pension accounting change which is not reflected in the historical data stand at about $100 per share. This means the broad market of big cap stocks is trading at 19.8X—a tippy-top capitalization rate that has never been sustained.

And that is before considering the impact of interest rate normalization on the $3 trillion of debt carried by the S&P companies. That alone could reduce reported EPS by $5-$8 per share, and also throw a monkey wrench into the debt-financed flurry of stock buybacks that have accounted for nearly all of the gains in per share earnings during recent quarters.

Then there are the numerous and compounding headwinds lurking down the road. These include baby boom demographics and the massive overhang of $60 trillion of public and private debt domestically; and global troubles everywhere—from the bankrupting Japan, to the tottering house of cards known as “red capitalism” in China, to the crushing burden of the socialist welfare state in Europe. Given these adversities, there is no reason to assume that US real growth will sharply accelerate from the tepid trends of the recent past.

Yet at current top of the range PE multiples, the market has priced in a macro-economy that attains the kind of “escape velocity” that has been evident in historical business cycles. Unfortunately, we are now in month #61 of this recovery cycle–well past the 55 month historical average for a recovery—and there has been no sign of a conventional cyclical rebound whatsoever. In fact, based on the disastrous Q1 GDP number (which is fixing to be further reduced in the upcoming benchmark revisions) and the tepid trends during Q2, forecasters are now tracking 2014 GDP growth at 1.7%—the lowest rate since the 2009 bottom.

In short, the market is pricing in a future based on past business cycles that are now irrelevant in an economy laboring under $60 trillion of public and private debt and a peak 3.5X leverage ratio against national income. This means that historical credit fueled growth is no longer possible, and that GDP therefore can grow, at best, only at the tepid rate at which real wage and salary incomes are inching forward.

This all adds up to a case for capitalizing corporate earnings at a rate well below the historical norms, not at the tippy-top of prior experience. But the Wall Street casino is so juiced-up on the Fed’s promise of endless liquidity and puts under the stock averages that it is uninterested in the fundamentals, and will keep buying the tips until some confidence shattering black swan comes flying in from out of the blue.

And that points to the real evil of monetary central planning and the serial financial bubbles that it inexorably produces. Bubbles are only recognized after the burst into a flaming crash. The chart below regarding the $2.3 trillion private label market in securitized sub-prime mortgages created by Wall Street in the run up to the last bubble top say it all. What we heralded to be money-good par securities because that time was different have ended up in a  smoldering pile of toxic waste.

UBS, the world’s largest wealth manager is “very worried” about “the lack of liquidity” that could wreak havoc during the sell-off. So it is reducing risk “over the full spectrum of assets.” Read….  UBS Warns Everything Is Overpriced, Prepares For Sell-Off

1 comment for “David Stockman: Why The Market Is Heading For A Fall”