About that jobs report on Thursday? I won’t quibble over the details. Companies have been hiring. OK, the number of full-time workers plunged and involuntary part-timers who want to be full-timers soared, but hey.

So here is a long-term chart from the Wall Street Examiner. Going back to 1992, it shows the “not seasonally adjusted” (NSA) numbers for the overall employment level (red) and the full-time employment level (blue). Throughout all the ups and downs, the gap between the two has been gradually but steadily widening: more involuntary part-timers, fewer full-timers. 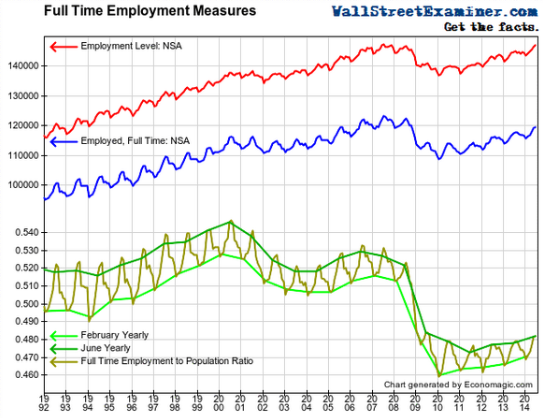 It makes perfect sense for businesses. It’s cheaper and more flexible. They can save on employee benefits. And just forget that 401(k). Obamacare’s definition of part-time workers and their exemption from coverage requirements may have played a role. But it doesn’t make sense for those folks who want full-time jobs and who may be working two or three part-time jobs to make ends meet.

Now note the green series at the bottom: the full-time employment to population ratio. It is one ugly dude. It has been recovering from its horrid dive during the Great Recession, but barely. Nearly $4 trillion of QE handed to Wall Street and nearly six years of ZIRP have done very little to improve it. It’s simply a terrible sign of the current employment crisis in America.