Public pension plans of states and cities have been in a heap of trouble for years. Promises of juicy pensions after a relatively short time on the job, with many decades of life expectancy remaining, are easy for politicians to make and buy votes with, and for unions to demand to please their membership. But they’re a tad expensive to live up to. Some have been involved in bankruptcies of their municipalities, including those of Detroit. Others are headed that way.

Now the Center for Retirement Research at Boston College released a study, based on 150 public pension funds, that sheds light on just how essential a permanently booming economy and everlasting bubbles in the stock and bond markets are to the survival of these funds – and how they’re already integrated into the calculus.

The best-case scenario, which is also the base scenario, assumes return on investment is 7.7% for all plan assets combined, for all years to come. So we’re in the biggest credit bubble in history, when 10-year Treasuries yield 2.6%, and paper with short maturities yields close to zero. Even many junk bonds don’t yield 7.7%, and defaults are excluded from the scenario. So stocks – over 50% of the assets in these plans – and other assets have to make up the difference. Last year they did, and in some of the prior years they did, but then there was the crash of the financial crisis, and before then, it was the crash of the dotcom era, and in the future, the swoon will have some other name, but there will be a swoon.

But there is no swoon in the future of these plans. Assuming the unlikely scenario of an eternal return of 7.7% annually, some of these pension funds are in worse trouble than others. A small coterie, like the Louisiana State Parochial Employees fund, is funded over 100%. But most plans are in trouble. Some of the worst sinners: Alaska Teachers  with a funded ratio of 47.9%, Connecticut SERS (41.2%), Illinois Teachers (40.6%), Chicago Municipal employees (37.0%), Illinois SERS (34.2%), Chicago Police (30.9%), or Kentucky ERS (25.8%). Some of the sinners are relatively small plans, but several are large, such as the Illinois SERS, Illinois Teachers, and Connecticut SERS. If markets were allowed to swoon, these babies would be wiped out.

But markets won’t be allowed to swoon, according to the projections. So in this optimistic scenario, all funds together were 72% funded, same as last year. The remainder: unfunded liabilities of a cool $1.1 trillion. 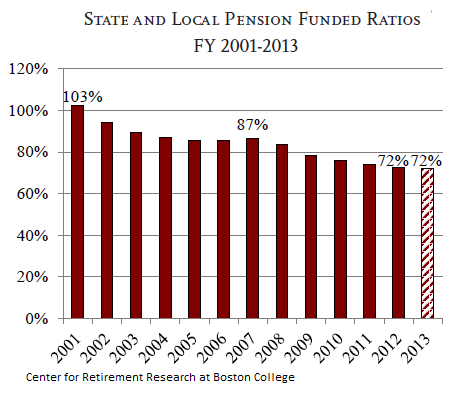 There is some ingenious statistical hocus-pocus in pension fund accounting, all finely detailed by the Governmental Accounting Standards Board (GASB). And one of these rules is about to change. According to the old rule, effective through fiscal 2013, funded ratios are based on asset values that are averaged over a five year period. So the catastrophic losses of the crash were spread over 2009 through 2013. And the gains of the subsequent years are averaged over five years as well.

Under the new rule, funded ratios will be based on current market values. Since there will never be another crash again, or even a major down year, funded ratios are going to jump. Or so the researchers hope. Assuming 7.7% annual return on all plan assets for all years to come, the funded ratios will reach 80% by 2017.

In addition to miraculous market returns, these pension plans also need contributions, and no one wants to stuff perfectly good money into them. When the financial crisis hit, states and cities were squeezing their budgets for every dime, and the easiest thing to do was to cut back on the Annual Required Contribution. The ARC is calculated to keep the plan on a steady path toward full funding.

No self-respecting politician wants to blow political capital on that. The recent highpoint was in 2001, when states and cities paid 98% of the required contribution. Since the financial crisis, contributions dropped to 81%. And in 2013, with budgets in better shape in some places, “sponsors appear to be paying” a slightly larger share of their required contribution, the researchers write. And so the ARC rate rose to a still dismal 83%: 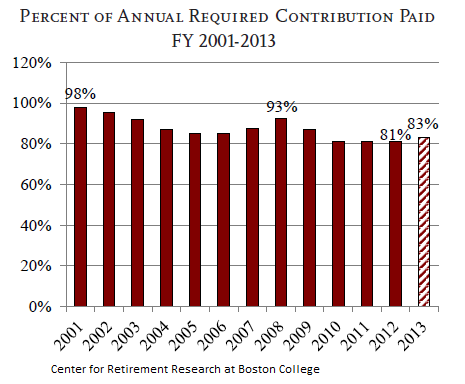 “Hopefully, this trend will continue as the economy improves,” the researchers write, hopefully being the operative word because there is no guarantee – in fact, it’s highly unlikely – that the economy will improve forever and shower states and cities with endless moolah. But that’s what it would take to eventually bring the contributions up to snuff.

And even that miracle, combined with the other miracle, a 7.7% return for all years to come, won’t be enough: it would still leave plans $1.1 trillion underfunded. Alas, if the rate of return drops to 5%, the hole will increase to $3.0 trillion, and plans would only be 50% funded. And at a rate of return of 4.0%, unfunded liabilities would jump to $3.8 trillion, and numerous plans would simply….

Reality is too ugly to contemplate. So now the hope is that the new rules – accounting for stock market surges in the year in which they occur – will trigger big gains immediately and drive up the funded ratios. Better not even think about the possibility that the stock market might stumble from current bubble highs or that a soupçon of chaos in the bond market would slam junk bonds and trigger a wave of defaults. What these pension plans need in order to be there in the future, the report suggests, is a booming economy year after year and endlessly inflating asset bubbles. Otherwise, forget it.

Wiping out in one fell swoop six years of carefully orchestrated propaganda, St. Louis Fed President James Bullard admitted that the Fed had dropped the ball during the prior bubble that blew up the financial system, and that it’s dropping the ball again during the current bubble. Read….Fed’s Bullard: ‘The Bubble Was Developing Under Our Noses’