Natural gas production has been on a tear in the US. The fracking boom caused coal use to go into remission, broadsided the solar-panel industry, and motivated energy-intensive industries or those that use natural gas as feedstock to build new plants in the US. It has changed the energy equation. It created tens of thousands of good jobs. It created a whole industry of lobbyists and activists, battling each other and greasing politicians along the way.

And it caused earthquakes, not just in Oklahoma, but also in the minds of speculators, hype artists, and Wall Street hope mongers, funded by a tsunami of nearly free money that was drilled into the ground for years while the price of natural gas remained stubbornly below the cost of production.

That money is gone for good. And the price? After some tumultuous gyrations earlier this year, it’s up 140% from the April 2012 low. But it’s still below the cost of production, and the industry has shown no eagerness whatsoever to drill for dry natural gas. Wells that also produce enough oil and natural gas liquids, which fetch a much higher price, are better deals.

So production last year rose a scant 1% to a new record of 24.3 trillion cubic feet, not nearly enough to meet demand. In 2013, gas in underground storage was drawn down by 700 billion cubic feet and ended the year 20% below where it had started the year. After some additional nasty winter weather, natural gas in storage is now at 1,266 Bcf. That’s 786 Bcf, or 38%, below where it had been at this time last year, and last year’s storage levels were already running below average, which caused the price gyrations this winter.

And current levels are 1,478 Bcf, or 54%, below those of the same period in 2012. In other words, demand has exceeded supply for two years in a row by over 700 Bcf each. But now there isn’t enough gas in storage to keep the system operational if a similar drawdown occurs again.

Questions are percolating if the US is going to have enough natural gas in storage by end of October to last through the winter. People are crunching all sorts of numbers to get a handle on it. But the Energy Department’s EIA remains sanguine. Its predictions concerning natural gas are almost always far off target, and its predictions of a super-low price over the last two years have become – with hindsight – a silly joke.

Much depends on the weather. A cool summer and a warm winter will get us through it. But if a long heat spell hits densely populated areas and AC units are maxed out for weeks at a time, and if major cold waves roll over the land in the winter, the US would have to import Liquefied Natural Gas from the international markets, in competition with Korea and Japan which pay nearly four times the current price at the Henry Hub. It’s going to be mayhem.

While all these questions are being kicked around and visions of shortages hover over every calculation, billions of dollars are thrown at LNG export terminals and deals are made to ship US LNG to other parts of the world. The idea is to take this dirt-cheap natural gas that would be produced in the US in maniacal bouts of over-drilling and arbitrage the price differential. And when Russia annexed the Crimea, voices clamored for the US to start selling LNG to Europe to lessen Europe’s dependence on Gazprom and save it from Russia.

But where the heck is all this natural gas supposed to come from?

The US is a net importer of natural gas. OK, exports via pipeline to Mexico and Canada have steadily risen over the last ten years, except in 2013 when they edged down 1% as the US was running a little short. And imports, which ballooned from the mid-1980s to max out when the fracking boom kicked off in earnest in 2007, have since dropped every year. Last year, imports – mostly by pipeline from Canada and some LNG – were down 8%. The difference – net imports – dropped to 1,311 Bcf, the lowest since 1989. 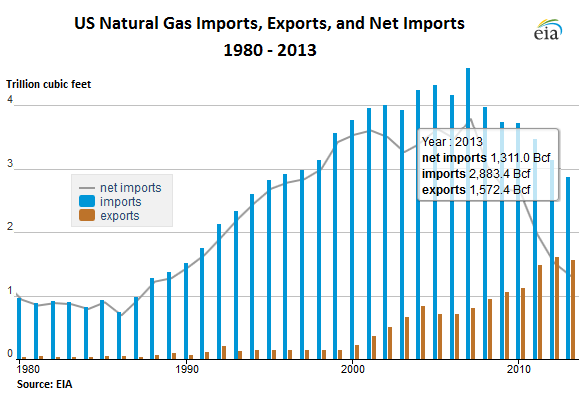 If these trends were to continue, the US could possibly reach natural-gas independence over the next four or five years and might become a net exporter after that. But consumption has exceeded production over the last 24 months – largely due to the damage the persistent low price has done to the drilling industry. Demand has been met by drawing storage levels down 54%! But that resource has now been used up.

For the US to perform the super-feat of becoming a major net-exporter of natural gas, a new mega-drilling boom for dry gas would have to burst on the scene, like right now, and resources, equipment, and people would have to be moved from drilling for oil to drilling for dry natural gas. But that isn’t going to happen with high oil prices and still dirt-cheap natural gas prices. Production goes where the profits are – and they aren’t in natural gas. Not yet. Not at the current price.

And so the promise that American LNG could relieve Japan’s thirst for natural gas and lower its dependence on the price gougers in the Middle East, and that the very same LNG could also calm Europe’s angst about Russia’s reliability as a supplier, the promise that easy billions could be made exporting that LNG has turned out to be just gassy hype.

The US has its hands full dealing with its own demand – at least until a dizzying increase in the price of natural gas triggers another drilling boom. Then all bets are off. But wait … once the price spikes enough to trigger that drilling boom, the promise of big profits from exporting cheap natural gas as high-priced LNG would turn into even more gassy hype.