This is precisely what shouldn’t have happened but was destined to happen: Sales of existing homes have gotten clobbered since last fall. At first, the Fiscal Cliff and the threat of a US government default – remember those zany times? – were blamed, then polar vortices were blamed even while home sales in California, where the weather had been gorgeous all winter, plunged more than elsewhere.

Then it spread to new-home sales: in April, they dropped 4.7% from a year ago, after March’s year-over-year decline of 4.9%, and February’s 2.8%. Not a good sign: the April hit was worse than February’s, when it was the weather’s fault. Yet April should be the busiest month of the year.

We have already seen that in some markets, in California for example, sales have collapsed at the lower two-thirds of the price range, with the upper third thriving. People who earn median incomes are increasingly priced out of the market, and many potential first-time buyers have little chance of getting in. In San Diego, for example, sales of homes below $200,000 plunged 46% while the upper end is doing just fine. But the upper end is small, and they don’t like to buy median homes [read… Housing Bubble 2 Veers Elegantly Toward Housing Bust 2]

Yet it’s going according to the Fed’s plan. Its policies – nearly free and unlimited amounts of capital for those with access to it – have created enormous wealth in a minuscule part of the population by inflating ferocious asset bubbles, including in housing. But now electronic real-estate broker Redfin has made it official: in 2014 through April, sales of the most expensive 1% of homes have soared 21.1% year over year, while sales in the lower 99% have dropped 7.6%.

The downtrodden who have to make do with buying the remaining 99% of the homes, these modern hoi polloi so to speak, whose real incomes have stagnated or declined as they face the soaring home prices of the Fed’s second housing bubble in less than a decade, to be financed at still historically low mortgage rates, well, they’ve hit a wall.

But at least luxury is thriving. In 9 of the 29 markets Redfin tracked, sales of the priciest 1% of homes jumped by over 50%. The top three were all here in the Bay Area – not surprisingly, given the miracles of the worldwide money transfer machine of IPOs and multi-billion-dollar startup acquisitions [Momentum Stock Fiasco Pricks San Francisco Housing Bubble].

In Oakland, sales of 1%-homes skyrocketed 96.2%, in San Jose 91.2%, and in San Francisco 72.2%. But in all three cities, sales of the 99% are down so far this year! So this isn’t exactly a booming housing market but a booming luxury market. A lopsided monstrosity that looks like this: 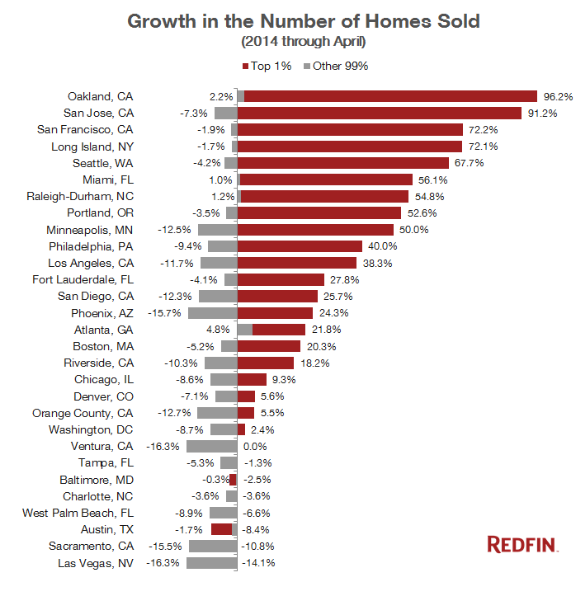 Some of these cities aren’t exactly cheap places to buy a 1%-home. In San Francisco, the median price is already over $900,000. But the minimum 1%-home? $5.35 million, according to Redfin. You’ll need enough after-tax income – if you’re not plunking down the cash you got from selling your startup – to cough up a monthly mortgage payment of $21,300. LA is second in line with the minimum 1%-home setting you back $3.65 million, or a monthly mortgage payment of $14,600. That’s the minimum. On the upper end, only the sky is the limit….

Location, location, location. Prices of 1%-homes vary by neighborhood. In my crazy San Francisco, Redfin found that Presidio Heights came out on top at $7.48 million for the average 1%-home, neck to neck with neighboring Pacific Heights at $7.18 million, and well ahead of Russian Hill at $6.53. But Presidio Heights was only the 6th most expensive neighborhood in the report, the top five all being in LA. King of the hill: Beverly Glen, where the average 1%-home costs a cool $11.86 million. 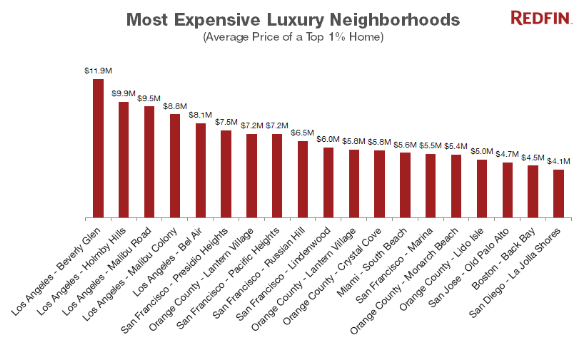 There are more expensive towns in the Bay Area, like Atherton, that could compete with the priciest neighborhoods LA has to offer. But they’re too small to make it into the stats. And these stats are a perfect illustration of what the Fed has set out to accomplish: the “Wealth Effect” – a semi-religious doctrine propagated by the Greenspan Fed and elevated to a state religion by the Bernanke Fed.

The relentless money-printing binge and zero-interest-rate policy did what it was designed to do: inflate asset bubbles and make some players rich, but not all. A home that cost $150,000 and jumps 50% in price will make the owner $75k. A home that cost $15 million and then jumps 50% will make the owner $7.5 million. A private equity firm that can borrow at near zero cost to buy up 40,000 homes might hope to gain around $5 billion. That’s how the Wealth Effect works.

The problem for the housing market is that there aren’t enough home buyers in that coddled 1%-category. The few can push up prices for a while but aren’t numerous enough to push up sales of the overall market. And they don’t like to buy median homes. Yet, as prices rise, homes move further out of reach of the 99%, and inevitably, sales drop further. At some point, something has to give. We already know from the last housing bubble and bust cycle what will give: prices. And afterwards, we’ll wonder, as we sort through the debris, how the Fed managed to sucker us into a second housing bubble and bust in just one decade.