“Homes in more than 1,000 cities and towns nationwide either already are, or soon will be, more expensive than ever,” Zillow reported gleefully the other day. “National home values have climbed year-over-year for 21 consecutive months, a steady march upward….”

Glorious recovery. Our phenomenal housing bubble that, when it blew up spectacularly, helped topple our financial system, threw the economy into the Great Recession, caused millions of jobs to evaporate, and made people swear up and down: never-ever again another housing bubble.

Steps in the Fed, and trillions of dollars get printed and handed to Wall Street, and asset prices become airborne, and Wall Street jumps into the housing market and buys up hundreds of thousands of vacant single-family homes, drives up prices, and armed with free money, shoves aside first-time buyers and others who would actually live in these homes, and turned them instead into rental units. Now in over 1,000 cities, prices are, or soon will be, as high as they were at the peak of the last housing bubble.

The difference? Last time, all that craziness was called a “bubble” with hindsight. This time, it’s called a “housing recovery.”

The result of this, as Zillow called it, “remarkable milestone”: real buyers who intend to live in these homes are falling by the wayside. Every week for months, mortgages to purchase homes have been between 10% and 15% below the same week in the prior year. In the latest week, they dropped 21%, the worst week I remember seeing. The number of refis has plunged even more, but that only ate into bank income statements and caused thousands of people to get laid off. Purchase mortgages, when they drop, decimate home sales.

Real Americans, rather than Wall Street, have been priced out of the housing market. Inflation has eaten into their wages. Many people can only find part-time work. Mortgage interest has risen from ridiculously low to just historically low. So the rate of homeownership in the first quarter, after ticking up last year and triggering bouts of false hope, fell to 64.8%. The lowest level since 1995! It had peaked in Q2 2004 at 69.2%, a sign that even as the prior housing bubble was gaining steam, regular folks were already priced out of the market. This ugly trajectory is the face of the “housing recovery” sans Wall Street: 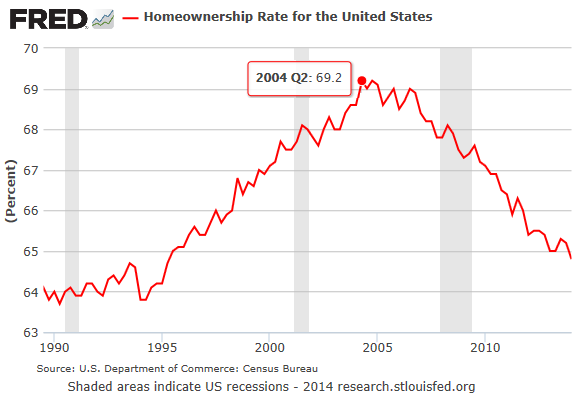 And now history has become a Fed-induced rerun. It started in six until recently white-hot housing markets in Arizona and California – Phoenix, Ventura, Riverside, L.A., Sacramento, and San Diego – where home prices have skyrocketed to the point where few people can afford them. Electronic real-estate broker Redfin, which covers 19 metro areas around the country, explained the impact of “the double whammy” – rising prices and mortgage rates – this way:

And even a year ago, a family with two median incomes had to stretch to buy that house. Now, in these six markets, sales are plunging and inventories of houses for sale are soaring. A deadly mix.

In Phoenix, inventories were up 42.7% in March from prior year, but sales were down 17.4%. So sellers slashed prices to get rid of these homes. In Phoenix, the hardest hit of the bunch, 45% of the sellers cut their prices. That’s how it starts. Haven’t we been there before? For instance, at the beginning of the prior housing-bubble implosion? This is what that debacle looks like: 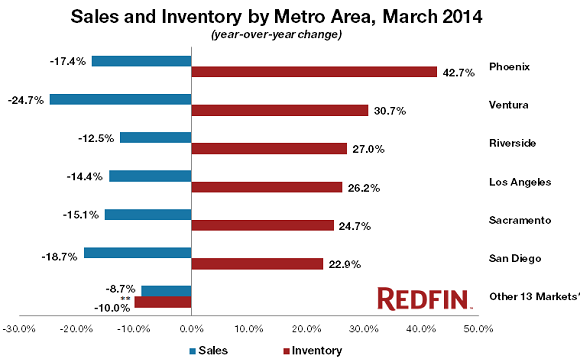 It didn’t look quite this terrible in 11 of the other markets that Redfin tracks: Austin, Baltimore, Boston, Chicago, Long Island, Philadelphia, Portland, San Francisco, San Jose, Seattle, and Washington, D.C. (due to “data anomalies,” Denver and Las Vegas were not included). Sales were still down, but so were inventories. When the last housing bubble imploded, it didn’t happen all at once across the country. In some cities, home prices peaked in early 2006; in San Francisco, they peaked in November 2007.

And what happened to the Wall Street investors who whipped the market into frenzy by deploying the Fed’s free money? Soaring prices are “eroding investor profit potential,” Redfin points out, and many have pulled back. As of year-end 2013, the percentage of investor purchases in these six markets dropped to 10.6% from 15.6% a year earlier. And since then, they’ve dropped even more. Easy come, easy go. 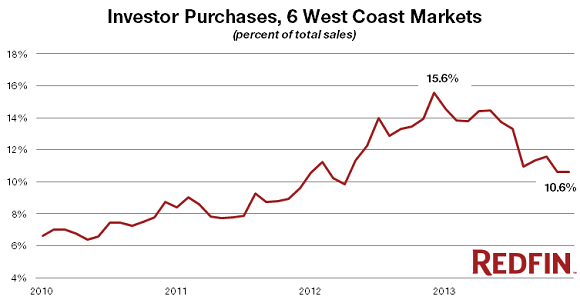 “Housing affordability is really taking a bite out of the market,” is how the chief economist for the California Association of Realtors explained the March home sales fiasco. “We haven’t seen this issue since 2007.” And so, the benchmarks established during the terrible implosion of the prior housing bubble are suddenly reappearing. Read….Housing Bubble 2.0 Veers Elegantly Toward Housing Bust 2.0