For years, home prices in Canada tracked those in the US, including during the crazy bubble years. But as US home prices peaked in 2006 and then skidded downhill unglamorously, Canadian home prices, after a brief swoon during the financial crisis, just continued to soar, unperturbed by reality and unhampered by any sense of gravity.

Now the average home price in Canada is $400,000, according to an analysis by BMO, one of the largest Canadian banks. In the US, where price bubbles are forming once again in a number of cities, the mean home price is $250,000. OK, we’re comparing average and mean, which aren’t the same thing, but the trends speak volumes (chart by OtterWood Capital Management): 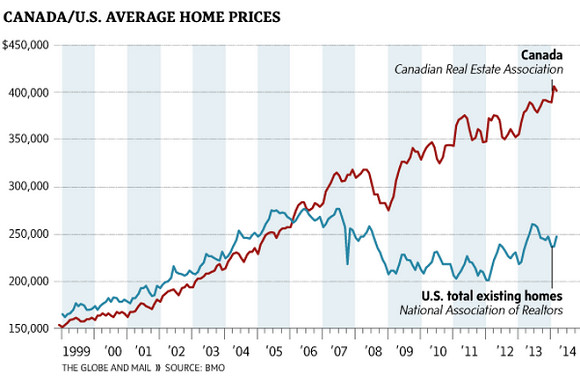 The gap between Canadian and US home prices is at an all-time record, with the average price in Canada now 66% higher than the mean price in the US. Even when the prices are adjusted for fluctuations in the exchange rate, BMO points out, Canadian homes are still 50% more expensive than the already expensive US homes. What gives?

Ripples are already appearing. Housing starts and building permits in Canada have been lousy. Bubbles have the self-propagating effect of attracting ever more resources and jobs and assuming an ever larger role in the economy. Until they implode. Then it all reverses, often suddenly. During the housing bubble in the US, that’s exactly what happened. And when it popped, millions of people lost their jobs in the housing sector, investors lost money, banks got bailed out…. You know the story.

Canada has experienced the same shift of jobs and resources into the housing sector. The more the housing bubble grew, the more it has attracted jobs and resources which further inflated it. And so the bubble ballooned even more insanely that in the US. In the process, the economy has become much more dependent on housing-related activity and jobs than in the past – and has become more vulnerable to a correction in housing. A 20% downdraft in home prices, BMO’s senior economist Sal Guatieri warned, could throw the Canadian economy into a recession.

So can we already hear the distinct popping sound from the housing bubble in Canada? “Not just yet,” according to OtterWood Capital Management. But the housing market is “overpriced,” and a “bubble” it is. Now all it takes to keep it going forever is a miracle, and a big one at that, but miracles are rare in the housing sector, and if they do occur, they don’t last long, and eventually, all bubbles do the same thing: the hot air hisses out of them, and the bigger the bubble, the worse the consequences.