The unemployment rate’s drop from 10% in October 2009 to 6.7% now is rock-solid proof, according to the deafening backslapping noises emanating from the Fed, that the masterfully thought-out, heroically executed money-printing binge and zero-interest-rate policy – lovingly dubbed QE and ZIRP by their beneficiaries on Wall Street – have been a resounding success.

Other measures that the Bureau of Labor Statistics publishes do not necessarily support such a glorious endorsement. The long-term unemployment fiasco has now even wormed its way into Fed Chair Janet Yellen’s parlance. And then there is the BLS’s Employment-Population Ratio.

That’s where “dismal” comes in.

The ratio depicts the number of employed folks divided by the size of the working-age “non-institutionalized” population. The unemployment rate purges from its list of the officially unemployed the millions of “discouraged” jobless people who haven’t looked for a job recently and tosses them into the pile of the merely jobless. No one even counts those folks anymore. And purging them from the labor force makes the unemployment rate look so much better. Alas, they’re still part of the population, and so they show up in the Employment-Population ratio.

The ratio is the most realistic snapshot of the employment situation in America that the BLS produces. It peaked in April 2000 during the halcyon days of “full employment” when 64.7% of the working-age population were actually working. Then it zigzagged down and finally crashed during the financial crisis. It hasn’t recovered since. In March, only 58.9% of the working-age people were working – full-time, part-time, any job however crummy. The ratio remains mired near the post-Great Recession bottom, despite (or many would argue because of) QE and ZIRP.

It shows that the economy has been creating jobs since the Great Recession, but barely enough to keep up with the growth of the working-age population.

So, compare that to the $3.3 trillion that the Fed has handed to Wall Street since the financial crisis, even while ZIRP has demolished the livelihood of savers and the elderly, and those who don’t want to risk their meager life-savings in a rigged stock market. They’ve been sacrificed on the altar of the “Wealth Effect” so that hedge funds and bailed-out banks can borrow at no cost to leverage up the world and gamble away the future. It was very successful: stocks have soared to dizzying heights, where they’re now beginning to totter.

And here’s how the Fed’s policies have “solved” the unemployment crisis.

The chart shows the Fed’s balance sheet that has ballooned to $4.16 trillion (printed money in green) vs. the Employment Population Ratio (“solved” problem in red). Gray areas are recessions. 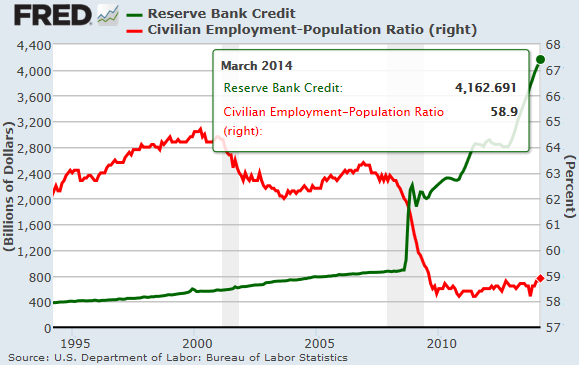 What an unmitigated fiasco for the Fed!

The Fed’s response? The propaganda machine at the Federal Reserve Bank of New York, which handled the multi-trillion-dollar bailouts during the financial crisis and runs the mechanics of the electronic “money-printing” machine, has rolled out its heavy guns to demolish this utterly embarrassing Employment-Population ratio [read…. Fed Tries to Crush “Misleading” Unemployment Measure].

Ironically, the Fed has admitted from get-go that the purpose of QE and ZIRP was to inflate asset prices, particularly the bond and stock markets, enrich those who hold and speculate in them, bail out the banks by fattening up their balance sheets, and lend free money to hedge funds and private equity firms so that they could pile into the housing market and drive up home prices to the point where the middle class can no longer afford them.

I must admit grudgingly that the Fed has accomplished all this with great elegance. It’s the gloriously hyper-leveraged “wealth effect” that the beneficiaries luxuriate in. What will happen when it all unwinds is another matter. But magically creating jobs out of the same thin air where the printed money came from was never part of the Fed’s strategy – nor could it actually do that. Electronically creating fake money is one thing, electronically creating real jobs is quite another.