He came out and said what no one in the Japanese power structure is allowed to say. It was outright blasphemy against the new religion of Abenomics that rules the Japanese media and governmental thinking, and even the foreign mainstream media. Abenomics wouldn’t solve Japan’s fiscal and economic problems, he said. And the recent governmental outlook to that effect was way too rosy.

That man is Kazumasa Oguro, formerly Senior Economist at the Ministry of Finance’s Policy Research Institute. He’d joined the MOF in 1997, but apparently, he is a free spirit that didn’t want to be reined in, and so he quit in 2008 and moved on to the Institute for International Policy Studies. He is now an Associate Professor of Economics at the Hosei University and a consulting fellow at the Research Institute of Economy, Trade & Industry.

“The limited freedom of speech bureaucrats have when handling controversial issues,” was one of the reasons he quit, according to Japan Real Time, which interviewed him. Instead of being cooped up in the MOF, he wanted to “talk openly about the country’s dire fiscal condition.” And he questioned if it’s a good idea for the country to pressure “government bureaucrats to put a positive spin on information.”

He is good company: the Bundesbank, which still doesn’t know how to toe the line apparently, has revealed a shocking lack of faith in Abenomics. In its Monthly Report for August (162-page PDF), it dedicated a whole section to the “new economic policies in Japan.” It found that “the bundle of monetary and fiscal measures might be” – emphasis mine – “suitable for stimulating the Japanese economy in the short term. But if these are not flanked by far-reaching structural reforms, any positive effects would ultimately turn into a straw fire.”

Flooding the land with money goosed growth in early 2013, largely on consumer and public spending, but already the keen eye of the Bundesbank observed that the “straw fire” was dying down in the most recent economic figures – led by a corporate refusal to invest in Japan (though companies are investing heavily overseas). By 2014, the impact on growth would be minimal. But the hangover would begin to burden the economy in 2015 and onward, it said.

Its graph (below), titled “Effect on GDP Growth,” shows the “straw fire” in 2013 dying down in 2014 and 2015. The brown bars denote the fiscal-policy contribution to GDP in percentage points. The current stimulus spending is additive to GDP (though it worsens the fiscal fiasco), but then the consumption tax hikes kick in, from the current 5% to 8% in 2014 and to 10% in 2015. The blue bars denote the contribution of the Bank of Japan’s money-printing binge, whose positive effects the Bundesbank expects to peter out in 2015 and then turn into a long drag on the economy that will last till 2022 or so. 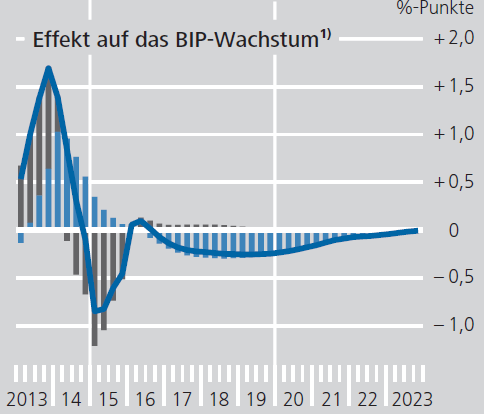 So, Mr. Oguro is in good company, not just some silly blogger like your humble servant, when he pointed out the obvious: the fiercely despised consumption-tax hike that caused the downfall of the Noda government last year and that pundits predict will plunge the economy into recession, and that some government officials don’t want to implement while others are already asking for a stimulus package to make up for it – that’s the kind of insanity bubbling up! – well, even that despicable and destructive tax won’t fix the deficit, not anywhere near. It’s “just a measure to stem the bleeding,” Mr. Oguro told the JRT.

Only about half of the central government’s spending is funded with tax collections. The rest is funded with borrowed money. That’s where Japan’s fiasco lies. It has gotten away with it for years – and might get away with it for a few more years. But now it’s suffocating under a rapidly growing mountain of debt that already exceeds 200% of GDP. And then what?

That’s how rosy, and off target, the Cabinet Office’s recent projections were. While the government had earlier promised that by 2020 it would eliminate the primary deficit, which excludes the cost of interest on over one quadrillion yen in debt, the Cabinet Office’s recent forecast doesn’t even go that far; the primary deficit would remain firmly in place, well beyond the forecast period. And that rosy scenario assumes that the economy would grow, adjusted for inflation, at an average annual rate of 2%!

“Out of the question,” Mr. Oguro explained. A developed country, burdened with debt, with an aging, shrinking population, and a rapidly dwindling workforce can’t grow 2% per year on average. Not these days. And so, Mr. Oguro said, the government’s projections were – surprise, surprise! – extremely optimistic.

And he saw a reason for that optimism: “When you are working for the government, it’s difficult to reveal tough and realistic figures to the public,” said the former bureaucrat. But “without realistic figures, a real debate on fiscal reform can’t begin.”