There’s been a lot of talk over the past year about the housing “recovery.” But the fact of the matter is that in terms of new single-family homes, there’s no genuine recovery, but there’s certainly a bubble in prices.

New home sales reported by the Commerce Department this morning came in with a headline number of 394,000 versus the consensus of economists’ guesses of 475,000. As a result of the huge miss, the market was shocked, not by the incompetence of economic forecasters, but by the news release itself. Apparently most investors still believe that economists have a clue, which is unfortunate.  As a result of the surprise. Treasury yields cratered, with the 10 year yield dropping from 2.91 just before the announcement to 2.83 45 minutes later. As bonds rallied sharply, stocks began to rally as well. We’re back to the idea that bad news is good because it means maybe the Fed won’t cut the market’s heroin.

The actual numbers (not seasonally adjusted) behind the seasonally adjusted headline number showed that the drop in sales last month was larger than typical for July, so to that extent, the big miss in the headline number wasn’t all that misleading. The average monthly decline for July over the previous 10 years is 6%. Last year the drop was just 2.9%. This year, July saw a drop of 18.6%. It was the biggest July drop of the past 11 years. Buyers apparently stopped buying after mortgage rates surged. 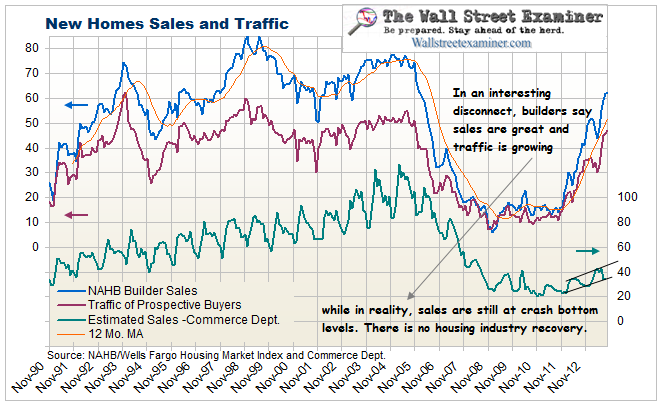 Conversely, the NAHB builder’s survey data for August, taken in early August, indicated that more builders were seeing better business in August. The July drop shown in the Commerce Department data may be transitory. The initial Commerce Department release is based on a tiny sample survey and subsequent monthly revisions are often substantial. We won’t know for certain if the sales uptrend is actually broken for several more months, and perhaps until the usual seasonal trough in January and February.

Regardless of whether the current trend is still rising or not, it’s important to keep this in perspective. In the context of historical norms, this is not a recovery. Sales remain extremely depressed relative to the normal levels of the past couple of decades. Housing may no longer be a drag on US economic growth, but its contribution to overall economic activity relative to its past share is minuscule. 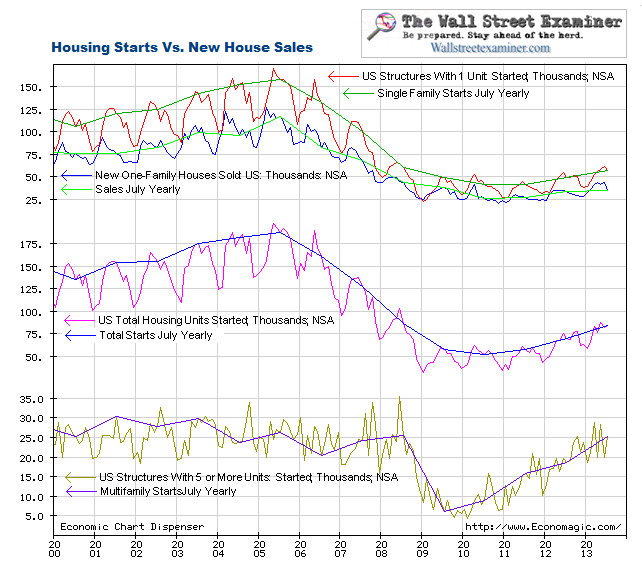 Most of the “recovery” in housing construction has come from the multifamily sector. Single family construction is barely off its all time lows.

While housing activity remains moribund, housing inflation is still raging. We may not have a housing recovery, but in terms of prices, we do have a housing bubble. New house prices recently hit all time records, and remain at a record July level even as the usual second half seasonal pullback in prices begins.  Average and median sale prices remain above their July peaks set at the top of the housing bubble in 2006 and 2007. 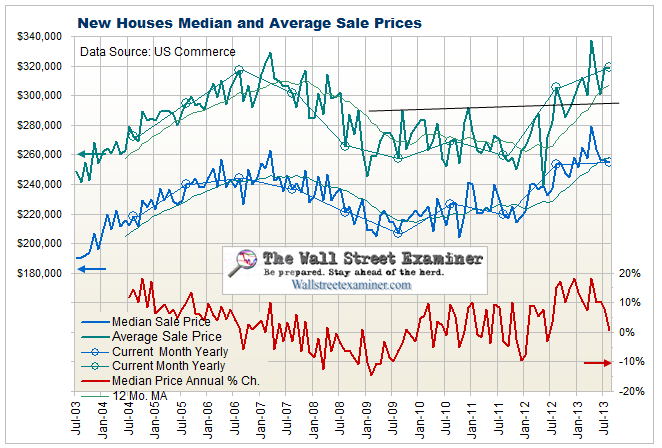 New house inventories have been rising over the past year, but here again, they are historically low and the inventory to sales ratio remains extremely low. Prices are likely to continue rising until inventories increase more or sales drop more. The NAHB builder survey suggests that the drop in sales reported by the Commerce Department may be a data anomaly. It will take a few months before we know for sure one way or the other. 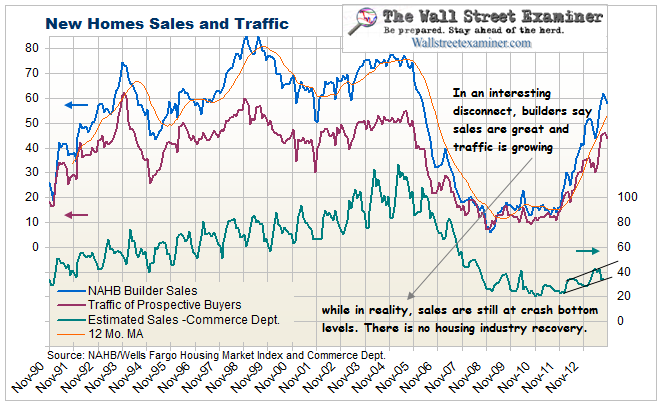 Stay up to date with the machinations of the Fed, Treasury, Primary Dealers and foreign central banks in the US market, in the Fed Report in the Professional Edition, Money Liquidity, and Real Estate Package. Try it risk free for 30 days. Get the research and analysis you need to understand these critical forces and stay ahead of the herd. Click this link and begin your risk free trial NOW!