My friends in the corporate restructuring industry aren’t breaking out the bubbly just yet. But with one eye, they’re gazing wistfully into the distant horizon where they’re seeing the first signs of a glimmer of hope. And with the other eye, they’re gazing at the screens of their smartphones and computers where they’re seeing a brutal junk bond rout.

Junk bonds had a phenomenal run. With each truckload of free money that the Fed and other central banks delivered to the markets, junk-bond valuations soared and yields plunged. The St. Louis Fed’s BofA Merrill Lynch junk-bond yield index, which was deep into the double digits during the financial crisis, hit a low on May 9 of 5.24%, down from 6.19% at the start of the year. Yields on some of the least bad junk in the index were well below 5%.

Before these crazy times that the financial crisis brought, you could buy an essentially risk-free 1-year FDIC-insured CD with an interest rate of 5%. But recently, desperate investors, mauled by the Fed’s zero-interest-rate policy and losing ground to inflation, were furiously grabbing yield wherever they could, taking on risks no questions asked, any risks no matter how large, to get to that 5% yield. A feeding frenzy for junk. Companies took advantage of this Fed-induced desperation and bamboozled investors into gobbling up $187 billion in junk bonds so far in 2013, a record!

One of the losers of the Fed’s policies was the corporate restructuring industry. With endless amounts of nearly free money available, even teetering companies with too much debt and money-losing operations could borrow more to cover up any holes. So my friends and their restructuring outfits branched out into performance-improvement consulting and financial advisory, and some have left the business altogether.

Bubbles balloon to an absurd magnitude. But one day the feeding frenzy dies down, and gradually, or sometimes suddenly, the risks, the silliness, the illogic, the whole nonsensical nature of the bubble move into the foreground for all to see, and more and more people open their eyes and see it. Some of them will try to get out somehow, quietly at first, by looking for the greater fool. And there are plenty of them, for a while. But new investors want to be compensated for the risks they’re now seeing, and they’ll demand higher yields in return for taking on those risks. That day might have been May 9 – when the air started hissing out of the junk bond bubble. What came afterward was a rout. And a spike in yields: 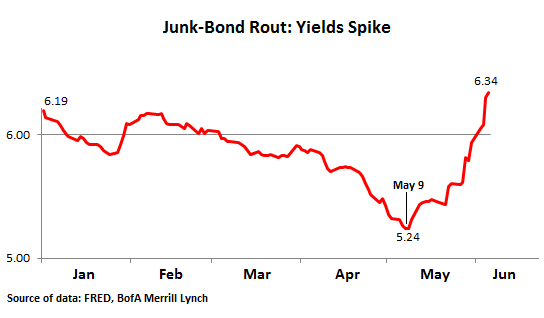 In less than a month, average yields, according to the FRED BofA Merrill Lynch index, jumped from 5.24% on May 9 to 6.34% on June 6, from the lowest level ever to the highest level of the year.

Risk is a matter of perception; and during bubbles, no one perceives it. Junk bonds have a relatively high probability of default, and when they default, the entire principal tends to go up in smoke. They’re called junk for a reason. When the easy money dries up and the chase for yield is over, companies might have difficulty issuing new junk bonds, and when they can issue them, it will be at a higher cost, and some companies might not find any buyers at all.

But that day hasn’t come yet. The spike in yields since May 9, as brutal as it has been, represents that ridiculously tiny hook at the right-hand corner of the long-term graph below: 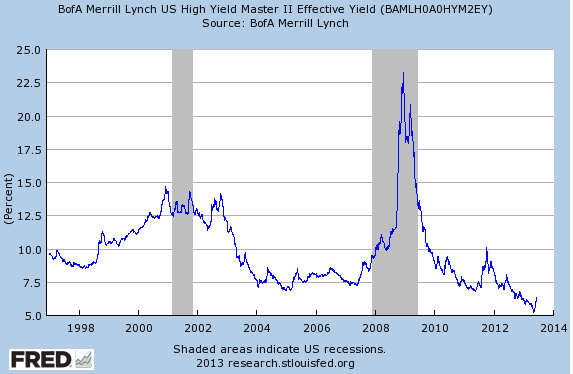 That’s how far the pendulum can still swing the other way! Easy money covers up a lot of holes, but when money gets more expensive, these holes turn into traps. Then debt blows up, and creditors kick out entrenched executives, and restructuring specialist are brought in to save the company – at the expense of stockholders and junk-bond holders. Creative destruction might finally take its course.

That’s what the Fed is afraid of. Banks and insurance companies have loaded up on junk. Their balance sheets are infested with risk. Fed governors have fretted publicly about it, citing junk-bond yields as symptom of excessive risk-taking. Yet junk bonds are a small outgrowth of the most magnificent credit bubble ever that these same Fed governors have so proudly created, and that they’re now trying to figure out what to do with. Merely their polite musings about “tapering” their bond purchases have taken junk-bond holders on a wild and unpleasant ride. As the chart shows, it may be just the beginning. And a harbinger of things to come in other markets.