So, 175,000 jobs were created in May – a rough estimate that is in line with the 12-month average of 172,000. The employment gains reported for March and April were revised down by 12,000. And the unemployment rate ticked up to 7.6%, from 7.5%, or as the Bureau of Labor Statistics phrased it in its polite and politically correct manner “was essentially unchanged.” With disturbing disparities that we’ve become inured to: the unemployment rate for Asians was 4.3%, for whites 6.7%, for Hispanics 9.1%, and for blacks 13.5%.

The number of long-term unemployed remained stuck at 4.4 million, and the number of those who wanted to work full-time but had only part-time jobs or had seen their hours cut back remained stuck 7.9 million. There are still 1.9 million fewer jobs than before the recession at the end of 2007.

Job creation in the private sector was spread thinly across a number of industries, while others remained stagnant. Different story in the public sector: governments shed 3,000 jobs. Payroll at the federal level was cut by 14,000 – down 45,000 for the 12-month period! The Postal Service alone was responsible for 3,800 job cuts. State governments trimmed off 2,000 workers, but local governments went on a hiring binge, adding 13,000.

These survey-based numbers are estimates that are statistically adjusted in a myriad and often fundamental ways to beat some sense into them. Accuracy remains elusive, however. So the broadest and perhaps most accurate measure of reality that the BLS offers is the Employment-Population ratio – the number of working people as percent of the total working-age population.

It’s dreary, stuck near the bottom of its range since the Financial Crisis – at levels last seen in the early 1980s! It had peaked in April 2000 during the halcyon days of “full employment” at 64.7%. Now it’s at 58.6%, unchanged. It shows that jobs have been created over the last few years, but barely enough to keep up with the growth of the working-age population. 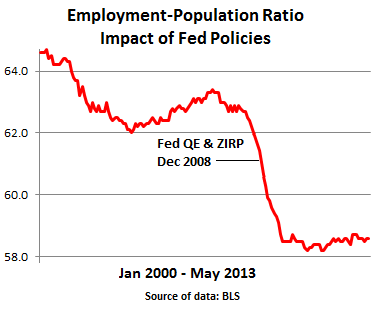 Standout in this scene? The Fed. As the graph shows, the Fed’s money-printing mania and zero-interest-rate-policy, unleashed upon the country in December 2008, have had at best no beneficial impact at all, or worse, have contributed to the problem. When the Fed says it wants to hand more money to its cronies in order to create jobs, it’s this graph that comes to mind.

The Fed has its reasons. Its policies have bailed out the investors of TBTF banks, created enormous wealth at the top, inflated asset bubbles across the country, produced a host of distortions, misallocations, and shifts, and demolished savers. That’s what the policies were designed to do. The one thing they haven’t done? Create jobs.