In March, six years after inception, the first ECB-organized Eurozone-wide household-wealth survey results were trickling out. But when the Bundesbank refused to publish the German data, insiders leaked the reason: too explosive for the current debt crisis and bailout environment because Italian households were far wealthier than German households. Shocking! And a red herring. The truth turned out to be far more shocking.

Now the ECB has finally published the all-country report—and it’s far worse than feared. Italian median household wealth was indeed over three times larger than Germany’s. But that wasn’t the problem. The problem was Cyprus.

Cypriot households (CY), as measured by both their median and average wealth, were the second richest in the Eurozone. Median household wealth—half the households had more, half less—of €266,900 was over five times Germany’s puny median of €51,400. Average household wealth reached a phenomenal €670,900 (that’s $872,000!), 3.4 times Germany’s €195,200, and just shy of Luxembourg’s €710,100. Rarefied levels of wealth achievable only by small countries with huge and murky banking centers, or lots of oil. Few countries in the world are in that elite club.

And Germans (DE), based on median household wealth, were the poorest in the Eurozone. 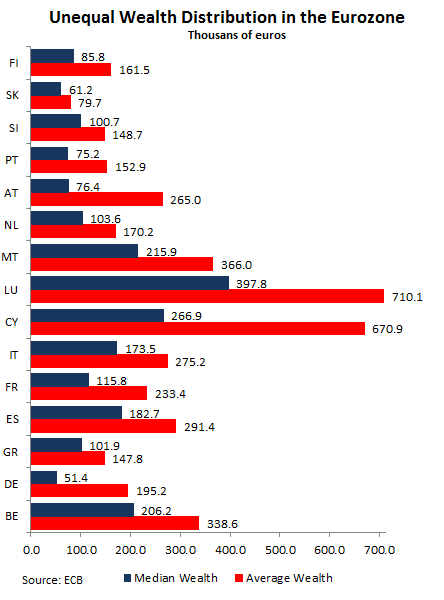 It wasn’t that Cypriot households earned a lot of money—they earned the same as German households! They just knew how to hang on to it. At least until their bubble blew up. What’s particularly galling for our hardworking Teutonic heroes is that since Reunification their real incomes have declined while that of their southern neighbors has soared, and their wealth was eaten up by taxes, high housing costs, and other expenses. 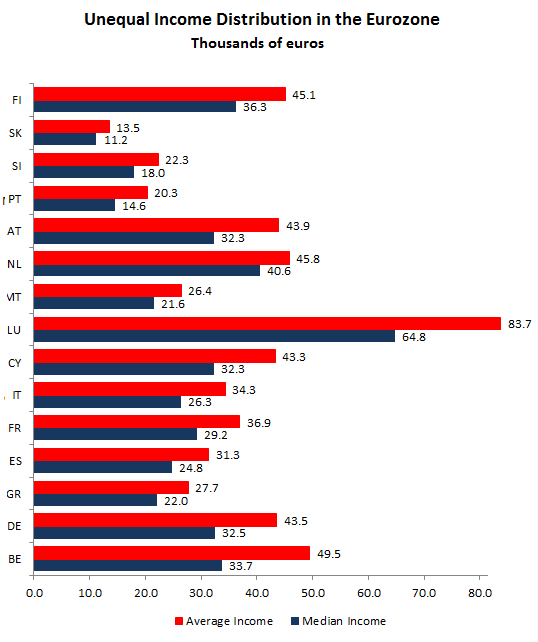 The comparisons are sobering. German household wealth amounted to less than half the Eurozone median of €109,000 and was even below that of former east-bloc countries, the poorest of which was Slovakia at €61,200. West Germans were better off, barely, at €68,000. East Germans were steeped in poverty at €21,000. Their comrades in Slovakia were three times richer. Even the maligned lazy corrupt Greeks were worth €101,900.

Or were in 2010, when the surveys were taken. It was the beginning of the surge of the German stock market, and the beginning of a rise in property values that had languished for years. By now, wealthier German households, those who own property and stocks, are significantly better off than they were in 2010, and they have since pulled up the average. Median household wealth, however—almost none of them own property or stocks—has certainly been left behind, again.

Alas, in Cyprus, the stock market, down 98% from its peak in 2007, has become inconsequential; real estate values, after a mind-boggling bubble, have been plunging for over two years; and billions in bank deposits have evaporated. So, some of the wealth was ephemeral, but Cypriot households are in all likelihood still, even today, wealthier than our Teutonic heroes.

Spanish household wealth has also been caught in a downward spiral of devastating unemployment and an exploding housing bubble—Spanish households lead the survey with a homeownership rate of 83%. In 2010, homeowners valued their homes at bubble prices still lingering in their minds. By now, much of the home equity Spaniards were clinging to in their minds has dissipated—with dramatic impact on household wealth.

That German households are now officially, and for all to see, the poorest in the Eurozone is causing front-page gloating. Yet, that these poor households are expected to carry the lion’s share of bailing out their far richer neighbors would only be a problem in Germany. Central bank sources told the FAZ that the Bundesbank and the ECB, to avoid stirring up a storm at an inconvenient time, kept this explosive wealth data secret until after the Cyprus bailout had been decided. But the data also explains the political motivation for the haircuts of account holders in Cypriot banks.

State-owned statisticians immediately scurried about Germany to explain away and rationalize the wealth difference. They dragged out homeownership rates—Germany at 44% was at the bottom—and the large publicly owned housing stock with its subsidized rents; it was public wealth, rather than private, but would end up in the same pot, or something. And they pointed at the average household size in Germany of 2.04, the lowest in the Eurozone, versus 2.76 in Cyprus, etc. etc.

But in the end, it was an ugly picture of wealth inequality in the Eurozone, where German households were the big losers. Chancellor Angela Merkel, however, remained unscathed and immensely popular though this wealth fiasco happened in part under her watch—testimony to her skills as the ultimate political animal.

In Spain, not a day goes by without a new political scandal. Just the last few days, King Juan Carlos’ daughter, La Infanta Cristina, was charged with aiding and abetting her husband in his myriad scams to embezzle money from the public purse. Now ties to a known drug trafficker hit the governing party. Read…. Spain’s Descent Into Banana Republicanism